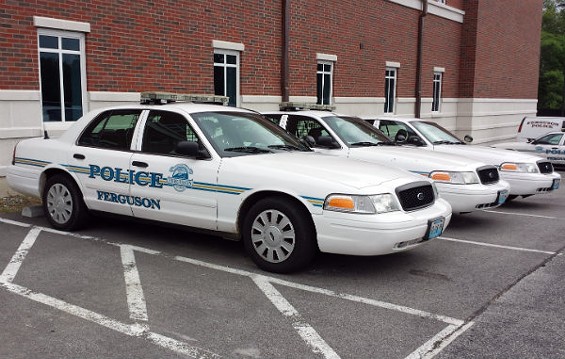 A former City of Ferguson corrections officer has been charged with the rape of a jail inmate. The incident occurred back on October 9, 2013, but the charges against Jaris Hayden -- for felony sexual contact with an inmate and permitting an escape -- were just filed on November 5 of this year.

The indictment came just a week and a half before the victim, identified only as J.W., filed a suit in federal court against the City of Ferguson as well as Hayden. She was in custody for driving with expired plates and giving a police officer a fake name.

"When you read the case, you're going to see there's claims against Ferguson that state that Ferguson's department has customs and practices that are so bad that those practices cause those incidents," says W. Bevis Schock, the attorney representing J.W.

Hayden began work as a corrections officer for Ferguson in May 2012. On October 9, 2013, he booked and fingerprinted J.W. when she got to the jail. According to the lawsuit, he told her she "smelled good" and that "this will teach you a lesson."

The court document goes on to say that when J.W. -- who was several months pregnant at the time -- complained she was having pain and discharge, EMTs checked her vital signs but then left it up to Hayden whether or not she'd be released into their custody. The EMTs left without taking J.W. with them. After J.W.'s boyfriend posted her bail, Hayden was allegedly having J.W. sign papers for her release when she said, "I will do anything to go home."

(Note: The next paragraphs of this story include explicit descriptions of sexual violence.)

According to the complaint:

By that remark J.W. did not intend to deliver the message that she would have sex with Hayden in exchange for release...J.W. was in great fear. Hayden was in a position of complete power over J.W. Hayden said "Follow-me," and took her down various hallways. Hayden took J.W. into a boiler room in the City of Ferguson jail. Hayden then unbuttoned his pants, removed his penis from his pants.

The complaint alleged that Hayden forced J.W. to perform oral sex on him and had vaginal intercourse with her before ejaculating in his hand. J.W. managed to "capture" a few of Hayden's pubic hairs during the incident. Hayden then allowed J.W. to leave by a side door, and to "run and stay close to the building" to avoid security cameras. According to the document, J.W. immediately went to a Subway across the street and got a bag to put the pubic hairs in. She also went to the emergency room where she was visited by police.

According to the complaint, the hairs J.W. saved were a match to Hayden's DNA.

The Ferguson city clerk responded to a request for comment with this statement, confirming that about a month after the incident Hayden was fired:

On November 5, 2014, the county prosecutor charged Hayden with four felonies: two for sexual contact with an inmate, one for permitting the escape and one for a "public servant acceding to corruption." Schock says the length of time between the initial incident and the arrest of Hayden was because authorities were waiting to receive the DNA results, plus the fact that the investigation was being handled by federal, not local, authorities. And according to Schock, the timing of the arrest, charges and the federal lawsuit is related to the unrest after the shooting death of eighteen-year-old Michael Brown.

"It was just sort of percolating along in the fed's system. When the Brown thing happened, everything got a little more focus on what happens in Ferguson," says Schock.

Hayden posted bail and is at home according to his attorney, Scott Rosenblum.

"We're going to evaluate the evidence and enter a plea of not guilty," Rosenblum tells Daily RFT. "That's his position."

Read the federal lawsuit and the indictment below: