For Michael Brown Sr., Weekend Brings a Baptism Instead of a Grand Jury Decision

Michael Brown Sr. pulled his SUV into the parking lot of a tiny white clapboard church in Jennings on Sunday, accompanied by his wife, Cal, and their children. Once inside West Calvary Mission Baptist Church, he disappeared into the men's room on the left-hand side of the foyer while Cal ducked into the ladies' room on the right. When she emerged into the humid sanctuary, Cal had changed out of her dress and kitten heels and into a large T-shirt with a photo of her slain eighteen-year-old stepson Michael Brown Jr. across the front. Michael Sr. wore shorts and a sleeveless undershirt which revealed a tattoo of Michael Jr. on his right shoulder.

They'd come to be baptized. It was a family event, planned months ago. Michael Jr. was supposed to be there, too.

Instead -- as the world knows well -- Michael Jr. was shot and killed by Ferguson police officer Darren Wilson on August 9. A grand jury's decision on whether or not to indict Wilson in the killing was rumored to be coming out this weekend -- in fact, at about the same time that the Brown family was scheduled to ascend the dais and be dipped, one by one, in the warm baptismal pool.

But when the grand jury adjourned Friday without making a decision, the Browns were able to go ahead with their long-delayed plans.

"It's just been so much stuff going on, we haven't had a chance to do it," said Michael Sr. "After all the stuff that's been happening, we have to keep doing positive things...it's just something we needed to do for our family."

The Browns came from an even tinier storefront church that was once an automotive shop -- the Flood Church on West Florissant Avenue, where the family has attended since July. Pastor Carlton Lee has become a passionate advocate for the Browns since the killing of their son, leading marches and rallies calling for the arrest of Wilson. For that, he's received many death threats, a fact he mentioned in his Sunday sermon. He also spoke about the impending announcement from the St. Louis County Prosecutor's office.

"Even before the grand-jury decision comes out, we already have the victory," he called to the roughly 25 congregants seated in the narrow sanctuary room. "Mike and Cal, no matter what the decision is, we still have the victory."

Lee's sermon touched on themes of vanity, self-improvement and loss. Michael Sr. listened with his arm draped around the back of Cal's chair.

"How many have lost more than you can imagine this year alone?" asked Lee.

Michael Sr. half raised his hand, then clapped.

"God will never break you without restoring you," Lee said.

After the sermon, a caravan of vehicles drove in the steady drizzle from the Flood to West Calvary. Inside, Pastor Lee changed out of his chambray shirt and camouflage pants into a long black robe. The center aisle was laid with bright orange tarps and the congregation sang, "Let It Rain." 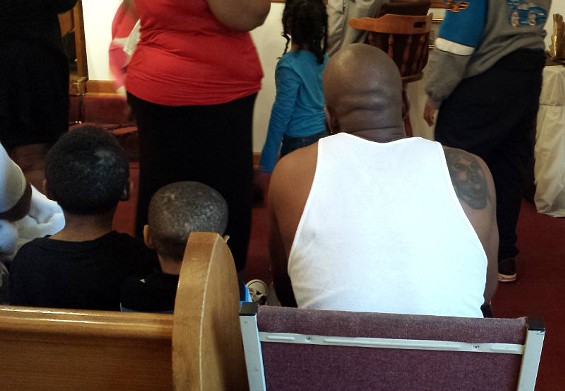 Lee began with the youngest, dipping squinting, perplexed little kids into the water as Michael Sr. kicked off his black Air Jordans. A tall man like his late son, Michael Sr. climbed up the dais in his socks and down into the pool, grabbing the hands of the Lee and a deacon to steady himself. Michael Sr. crossed his arms across his chest in the thigh-high water as the pastor and the deacon put their hands under his elbows.

Lee clamped two fingers on Michael Sr.'s nose, and plunged him back into the water and out again.

"Hallelujah!" the women shouted. Michael Sr. climbed back out grinning, toweled off his face and embraced his wife.

"I feel good. I feel really good," he said afterward in a voice so low it was hard to hear him above the shrieks of kids trying to use the wet tarps as a Slip 'N Slide. "I was baptized when I was seventeen. I'm a little older, I understand what it means. When you're a teenager, you really don't know no better, you just do what your parents tell you to. As you get older, it becomes different, you know?"

He said Michael Jr. was christened at birth and baptized at twelve or thirteen. At the teenager's funeral, Cal and other family members spoke at length about his recent interest in religion and Bible study. Perhaps he, too, would have had a more meaningful second baptism.

"I'm just doing positive things to keep my mind at ease," Michael Sr. continued, saying he's been watching CNN and relying on the family's attorneys to get word about the grand jury. "That's all. It's just still hard for us. Especially me."