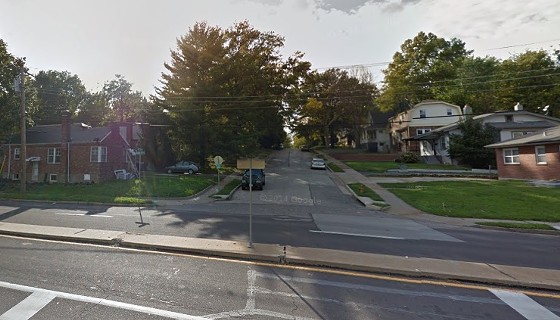 University City police say they received a call around 10 p.m. Monday for a burglary in progress in the 7400 block of Wayne Avenue. The caller told police that the suspect was climbing through a bedroom window and shooting into the home. As officers arrived to the scene, they, too, took on gunfire from inside the house. One of the three officers, a five-year veteran of the force, was shot in the chest.

Police returned fire, and the suspect fled toward nearby Midland Avenue through back yards. He remains at large.

Updated 3:23 p.m. with name of victim and suspect.

Inside the home, police found Donna Washington, 55, with a gunshot wound to the leg. She was taken to Barnes-Jewish Hospital where she was pronounced dead. The suspect is her son, 33-year-old Major Washington. Police say Major was involved in a disturbance with his mother and stepfather on Saturday and threatened to kill them. He fled that incident before police arrived.

Major Washington is considered armed and dangerous and wanted for first-degree murder and assault on a police officer.

The officer, who police have not named, is listed in serious but stable condition.

During last night's unrest in Ferguson and St. Louis, initial reports came in that the officer may have been shot during the riots following the the grand jury's decision not to indict Ferguson police officer Darren Wilson for the killing of Michael Brown.

A U. City police officer has been shot. Condition is unknown. Search for suspect underway. It is unclear if related to #FergusonDecision

Police later got some of the facts straight, though still had the exact gunshot wound incorrect.

U. City officer was shot in the arm. He is expected to be okay. Shooting may not be related to #Ferguson unrest.

Jump to comments
« After Promises of Advance Notice, N…  |  16 Photos of Ferguson Burning »