Greg Hilderbrand welcomed the National Guard soldiers milling around his back door Tuesday afternoon. Unfortunately, they were a day late.

During a chaotic Monday night, the National Guard was no where to be found as angry rioters looted and burned dozens of businesses in Ferguson following a grand jury's decision not to indict officer Darren Wilson. On Tuesday, Governor Jay Nixon ordered 2,200 National Guard troops to protect the city.

Hilderbrand's loft apartment above the Chinese Gourmet restaurant on South Florissant Road narrowly escaped being a target of Monday's vandalism.

All he could do that night was stand and watch as vandals broke windows and set fire to trash cans around his home. He knew if he said anything, they would turn on him, and he had a daughter sleeping upstairs to think about. A frequent protester himself, the 35-year-old Hilderbrand is incensed by the violence and destruction.

"My problem is they link the violence with the protesters, and it's a totally separate group of people," he told Daily RFT Monday night as he stood guard near his front door. "I've seen people down there every night dedicated and loyal through rain, sleet and shine. They're down there peacefully protesting. This shit happens, and it's a whole different group of dudes just coming through destroying shit."

The posse continued to move up the street, bringing destruction with them -- smashing a window here, tearing down a sign there. As the group bashed in the windows of the True Value Hardware, one of them shouted, "Got any lighter fluid?" When the answer turned out to be no, the group moved on.

Eventually the marauders stopped across the street and in front of Hilderbrand's home. One girl told him and his wife, Laura Charles, to move out of the way so they wouldn't be hit with rocks.

"We live here," Charles pleaded. "My daughter is scared out of her mind upstairs. Please don't do this."

The group shouted back, and one of them in a white clown mask crossed the street to talk with the couple.

"We live in this building," Hilderbrand replied. Charles again asked the young man if they would stop.

"Fuck no! It's the new Ferguson, bro," said one male in the mask, shrugging his shoulders. "No justice no peace. Let me tell you something: Anytime you can just shoot a mothafucka, then it's like that."

The group eventually disappeared around a corner, but not before busting the windows of BKM Fitness Bootcamp.

"That's another new black-owned business that recently opened," Hilderbrand said, the other being Natalie's Cakes and More, which also had broken windows Monday. "They fill that parking lot regularly."

Hilderbrand continued to guard his front door throughout the night Monday. As twilight settled over South Florissant Road on Tuesday evening, Hilderbrand, had just finished moving the last of his stuff out of the apartment. 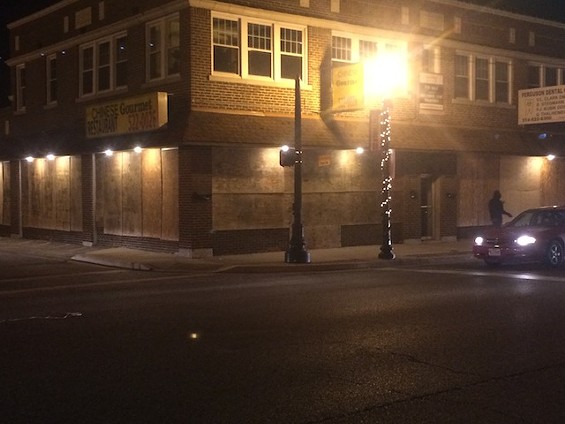 "I took anything dangerous out of the apartment," he said. "Any guns, knives, swords, crossbows I might have."

He moved it all to a family member's house elsewhere in Ferguson.