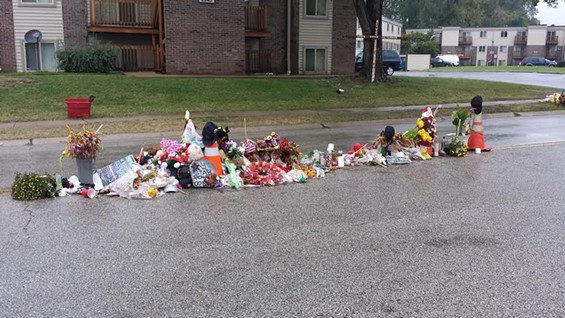 Ferguson protesters have twice rebuilt the makeshift memorial in the spot where ex-Ferguson Police officer Darren Wilson fatally shot Michael Brown: once after it burned down in September and again on Christmas night after someone drove over it.

Now, the police department's spokesman is on unpaid administrative leave after calling the memorial, made mostly of stuffed animals, flowers and candles, a "pile of trash."

I can't believe some destroyed the Canfield memorial on Christmas. Hate is deep. (via @jay_myles2) pic.twitter.com/XumtQ23gMT

The Washington Post asked Ferguson Police spokesman Timothy Zoll if the department would investigate the most recent destruction of the memorial as a crime.

"I don't know that a crime has occurred," Zoll told the Post Friday. "But a pile of trash in the middle of the street? The Washington Post is making a call over this?"

Zoll originally told his superiors and a reporter at KMOX that the Post misquoted him. KMOX reporter Michael Calhoun reported that Zoll told him a driver from "outside the area" unfamiliar with the memorial could have mistaken it for trash.

But after an investigation by Ferguson Police revealed that the Post correctly quoted him, Zoll admitted that he'd mislead department superiors and reporters when asked about the interview. Police said Zoll is now on unpaid leave while disciplinary proceedings begin. 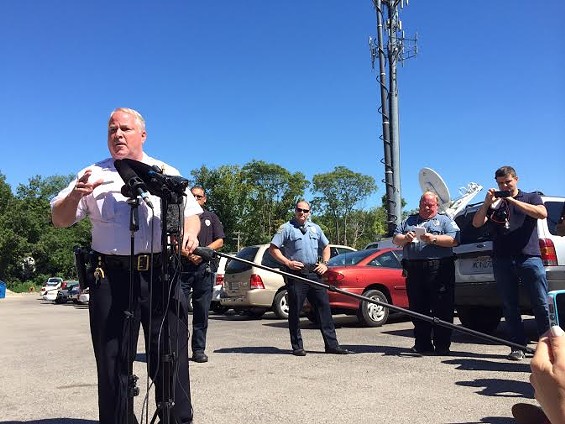 Activists who've been protesting against police shootings quickly rebuilt the Brown memorial and criticized Zoll for scoffing at its destruction.

"The memorial is a site of solace and pilgrimage for Michael's family, friends, community and many who never knew him but mourn his senseless, violent death," says Reverend Osagyefo Sekou of the Fellowship of Reconciliation. "Officer Zoll's comments merely reflect the thinking of the Ferguson Police Department, and, sadly, far too many of his colleagues around the country that black people's lives are trash."

Just got to #MikeBrown memorial and it's been ran over. Someone who saw it on video said it was intentional. pic.twitter.com/UlR2TGSxCS

"The city of Ferguson wants to emphasize that negative remarks about the Michael Brown memorial do not reflect the feelings of the Ferguson Police Department and are in direct contradiction to the efforts of City officials to relocate the memorial to a more secure location," the city said in a released statement.

"The city of Ferguson and the Ferguson Police Department in particular are focused on creating a trusting relationship with the entire community and taking impactful steps to improve the effectiveness of the department," the city said in a statement.

In September, protests turned violent the night after the Brown memorial burned down. The window at a beauty supply store was smashed, the Whistle Stop custard shop had a small fire and two officers were injured.