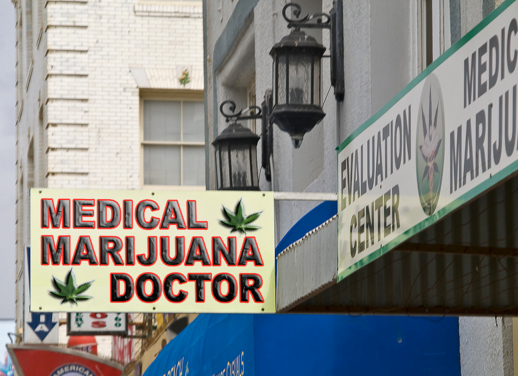 Pot activists are confident that 2016 is the year that Missouri will finally legalize medical marijuana — with a slew of big donations aimed at placing a measure on the ballot this fall.

But Show-Me Cannabis, the group that's helping to spearhead the effort via the campaign committee "New Approach Missouri," will have to do it without one of the group's founders. Leah Maurer, a prominent pro-marijuana activist, resigned from Show-Me Cannabis' board on Friday.

Maurer's resignation followed a slew of lawsuits against her and husband Travis Maurer, as well as the revelation of an email that seemed to uncomfortably combine the effort to legalize marijuana in Missouri with future entrepreneurial opportunities.

The Maurers have a complicated relationship with Missouri. Now living in Oregon, the couple fled Missouri after a 2009 police raid uncovered 300 pot plants growing in their Columbia home. The traumatic arrest (plus a felony conviction) motivated Travis to become a key organizer of Measure 91, Oregon's successful 2014 ballot measure to legalize recreational marijuana. (In 2010, along with others, they also co-founded Show-Me Cannabis in Missouri.)

Having shepherded Oregon into the legal weed club, Travis was elevated to near-royalty in the world of cannabis reform. The Oregonian credited him with "masterminding" Measure 91, while Newsweek devoted an entire cover story to chronicling his journey from pot dealer to political activist. Many saw Travis' support of Missouri's drug reform efforts as a sign of good things to come.

That's until earlier this month, when news broke that Travis and Leah Maurer were being by sued by several irate business partners. One lawsuit accuses Travis of reneging on a $158,400 settlement he'd made after a business dispute in 2014, and another accuses him of helping himself to tens of thousands of dollars from The Weed Blog, which he partly owns. A third lawsuit, naming both Travis and Leah, said the couple strung along a wealthy Oregon investor named Randy Quast while he poured nearly $700,000 into a non-existent marijuana grow operation.

Quast's lawsuit also seeks damages for libel and slander connected to a September email in which Travis allegedly described Quast as "a fucked up drunk that likes little kids."

During a conversation with Riverfront Times last week, Travis Maurer offered a general denial to the three lawsuits' allegations. He declined to address specifics.

The specter of messy litigation appears to be shaking the Maurers' established relationships with pro-legalization activists in Missouri. On Friday, Leah Maurer resigned from the board of Show-Me Cannabis.

In her resignation letter, Leah Maurer wrote that she "can no longer devote the amount of time, focus and energy I know this organization deserves. Over the next year Travis and I have a number of opportunities and challenges that we need to focus on. Stepping down at this time is best both for our family and for your organization."

A carefully-worded letter probably won't satisfy those already questioning Leah Maurer's involvement in Show-Me Cannabis' medical marijuana campaign. The St. Louis Post-Dispatch notes that Leah Maurer wrote a $26,000 check to New Approach Missouri in June, but the funds were actually drawn from a company co-owned by Randy Quast, the same businessman suing the couple in Oregon. Quast now claims that he never signed-off on the donation.

Then there's the email Leah Maurer sent in October to a cannabis investor named Jerome Dewald. In the email, Leah claimed that she owned The Weed Blog website, even though it's actually Travis who has part-ownership — and that is only a minority share.

Even stranger, Leah's pitch appeared to frame the couple's political activism as a method of accessing Missouri's future marijuana market.

"My husband and I have demonstrated how being intimately and financially involved in marijuana campaigns is really how one is first to market," she wrote in the email, which was made public last week by Oregon Cannabis Connections. "Being the driving force behind a campaign has proved to be invaluable because we have a seat at the table for rule making and implementation of the laws. ... So, to be transparent, anyone we work with we expect to be financially involved in the campaigning process."

Leah Maurer concluded the email with a PS: "We are getting ready to launch a campaign in Missouri to legalize medicinal marijuana."

Reached last week by phone, Dewald said he was surprised at Leah Maurer's tactics, especially given the high-profile failure of Ohio's 2015 legalization initiative, which sought to give a cartel of investors exclusive rights to cultivate marijuana in the state.

"It's fairly uncommon," Dewald said. "I rarely see people who pump up their political activism as part of an investment pitch."