Jennifer Joyce on Betrayal, Police Pressure and Succeeding in a Thankless Job 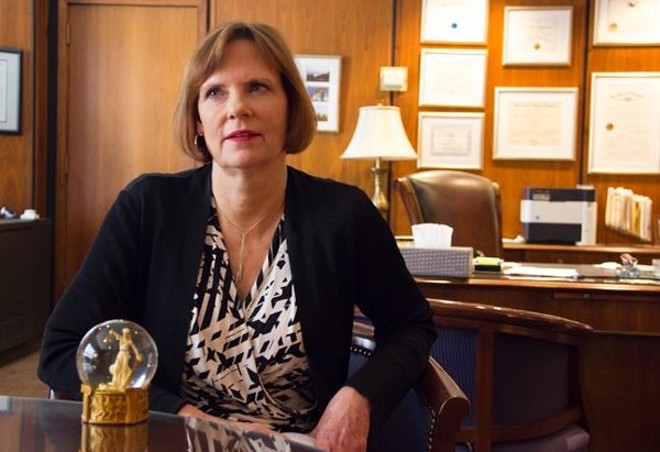 On August 2, St. Louis primary voters will choose the city’s Democratic nominee for Circuit Attorney. The job is a magnet for controversy but also comes with serious clout – among other things, the Circuit Attorney holds the authority to charge suspects with felonies and misdemeanors. Because St. Louis skews heavily Democratic, the winner of the primary election will very likely become St. Louis' next top prosecutor.

No one is watching the election more closely than Jennifer Joyce, who has served as Circuit Attorney since 2001. As detailed in a Riverfront Times cover story earlier this month, Joyce’s decision not to run for a fifth term surprised just about everyone. Her impending exit has yielded a battle between four candidates: two prosecutors employed in her office, a former prosecutor-turned-politician and a retired metro police officer.

Last month, Joyce sat down with RFT to discuss the Circuit Attorney race and her endorsement of lead homicide prosecutor Mary Pat Carl. Yet over the course of the 90-minute interview, Joyce touched on much more than just the election.

Joyce is cognizant of her polarizing legacy as a prosecutor and public official, but in the past she’s rarely opened up to reflect on her lengthy career. Below, we’ve organized some of Joyce’s notable remarks on her decision to exit public life, the challenges facing the office and what lessons she’s learned during sixteen years on the job – and what those lessons could mean for her successor.

Taking on the Police

After winning the 2001 election, Joyce’s first months as Circuit Attorney were tumultuous, to put it lightly. Her predecessor, Dee Joyce-Hayes (no relation), had charged St. Louis police officer Robert Dodson with second-degree murder in connection to the 1999 death of a burglary suspect whom Dodson had chased to the roof of a pawnshop. The prosecution of the officer fell to the newly elected Joyce. A jury eventually found Dodson not guilty.

“This whole idea is that we’re a rubber stamp for police, it a mythology,” Joyce says. “We have pissed off a lot of police officers who have been up all night with an arrest, and we say 'Nope, you did a bad search' or 'There’s no probable cause.'”

Among those she’s pissed off is Jeff Roorda, the former cop and business manager for the St. Louis Police Officers’ Association. Roorda is a fierce (some would say blind) advocate of law enforcement, and he's become the go-to talking head whenever a cable network wants to talk about the so-called "war on police."

In 2012, Roorda accused Joyce of "prosecutorial vanity" for filing charges against two officers who had been filmed in separate incidents allegedly beating handcuffed suspects. One officer was later acquitted in a jury trial, while the other was found not guilty in a bench trial.

After she filed the charges, Joyce remembers Roorda showing up at her office and giving her an ultimatum.

"He came and said basically that my organization is never going to support you if you go forward with this."

For a prosecutor, losing the support of the police union can be a political death sentence. But Joyce didn't flinch.

"I just told him, 'If this is the end of my career because I've made the decision to charge these officers, I’m at peace with that. That's OK.'"

Betrayal by an Employee

In 2015, the Circuit Attorney's Office was rocked with scandal after an assistant circuit attorney was revealed to have helped a St. Louis cop cover up an in-custody beating of a suspect. Prosecutor Bliss Worrell ultimately pleaded guilty to "Misprision of a Felony" and was sentenced to eighteen months probation. At the time, Joyce called the incident "the worst thing that’s happened to me in twenty years as a prosecutor.”

Today, Joyce insists the incident shouldn't reflect badly on the rest of the office. She's proud of how quickly other employees outed Worrell.

"She was defective. She was a bad hire," Joyce says. "I’ve hired a thousand people, probably more. If you think you can hire that many people and not hire crazy, you're naïve. You’re going to eventually hire somebody who is not good."

Worrell had come highly recommended, says Joyce. She had interned at the Circuit Attorney's Office before joining it as a prosecutor in 2013. Worrell's law professors were interviewed. A federal judge had called Joyce on Worrell's behalf. Making the hire seemed like a no-brainer.

But it was a mistake, and Joyce is still angry about it.

"I will never speak to her," says Joyce. "She betrayed a very important trust that the community has. This is something that has never happened, that I'm aware of, in this office until her."

A Question of Diversity

Among the four candidates vying to replace Joyce, the most consistent criticism of her office has been its lack of diversity. There aren't enough enough minority prosecutors, the argument goes, and those that do work in the office never seem to hang around for long.

Joyce acknowledges that the office needs to do better. Out of 63 attorneys on staff, only eight are black.

Indeed, according to the latest data available from the American Bar Association, just four percent of the U.S. legal community is black. And many newly graduated black attorneys are gobbled up by high-paying jobs in the private sector.

There are other reasons a qualified black attorney might stay away from the Circuit Attorney's Office. Public criticism can be especially harsh for black prosecutors, Joyce says. She still holds a grudge against Jerryl Christmas — himself a black attorney and former prosecutor who unsuccessfully challenged Joyce in two elections — for posting a Tweet calling one Joyce's prosecutors a "black puppet."

"It is very hard for African American lawyers to do this work right now," Joyce says. "They get a ton of abuse for being prosecutors. I’ve gone to the black law students at Mizzou and have them tell me that. I’m not saying it can’t be done. We’re able to hire a lot of African American attorneys, but we find that they leave after a couple of years.  I wish we could do better."

Shortly before rolling to her fourth election victory in 2012, Joyce decided it would be her last. She was tired of the politics and public pressure — and especially the fundraising. But there was another thing to consider.

"I’ve never felt like I had a ton of time in my life," Joyce says. Both her parents died of cancer at 57. She's 53. And whatever time she has left, she wants to spend it with her husband.

Also, she wants to travel the country — and she plans to do it in a 40-foot RV.

"I’ve always wanted to do some things in my life. Living full-time in an RV and traveling around the national parks is one of them," she says matter-of-factly. "I can’t do that and have this job."

Even now, though, she finds the job intensely stimulating. Even setting aside the office's hefty caseload of murders and violent crimes, she is also fending off legal attacks from the public defender's office and overseeing a high-profile prosecution of a St. Louis police officer charged with murder.

"I like the job more every day," she says. "We’re in a really interesting time in the criminal justice system now. I’ve been meeting a lot with people around the country and other prosecutors in other large cities, and there's a lot of collaboration going on and an exchange of ideas."

The next Circuit Attorney will have their job cut out for them. Public scrutiny of police shootings is on the rise in St. Louis and across the country, a trend that shows no sign of slowing. And then there are the legal issues surrounding body cameras, a fledgling technology that Joyce calls "a monster coming down the pike."

Those are questions Joyce's successor will have to tackle, as well as questions yet to be identified. St. Louis' next top prosecutor will face challenges that even Joyce cannot imagine.

"They’re going to have to know what they’re doing," Joyce says by way of advice. "This job is one that has a lot of pressure from the public. I’ve had City Hall call me and want something done. I’ve had [U.S. Congressman] Lacy Clay call me and want something done. I have Roorda calling me and demanding stuff. I have the activist community demanding stuff.

"People are always pushing you in this position, and what you need to do this job effectively, I believe, is your own wealth of experience, your own base of knowledge, your own understanding of the law and understanding of what our role is as prosecutors. If they’re just going to be relying on advisers, then the public really didn’t elect the Circuit Attorney. You need to have somebody that has the wherewithal to navigate those issue by themselves."