Soccer Stadium Deal Lives, Dies, Lives Again. But Is That a Good Thing? 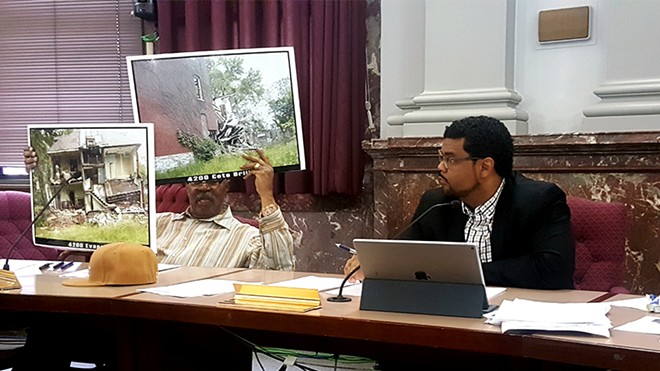 Let's not kid ourselves: The fact the soccer stadium plan survives is no victory for St. Louis.

At yesterday's hearing of the aldermanic Ways and Means committee, the fate of a $200 million pro-soccer stadium lived, then died, and then lived again in quick succession. By the end of the hearing, the committee passed an amended bill, sending the measure to the full Board of Aldermen. And if the proposal can pass the full board, then it's likely the April municipal ballot will feature a referendum asking voters to divert $60 million from an increase in the city's "use tax" to stadium construction costs. It's not an easy path — that tax increase would need approval from voters in April, too.

The committee voted twice on the stadium financing bill, and Alderman Scott Ogilvie whooped some fine-print ass by pointing out that the city was needlessly forgoing a ticket tax and other revenue that could alleviate its burden — items he'd called out in a blog post he published on Saturday, outlining his generally wary position on the plan. After the committee initially voted against the stadium proposal, rapid-fire negotiations yielded a better package, with an amendment adding up to $17 million in the revenue Ogilvie had identified. When the committee voted again, Aldermen Ogilvie and Stephen Conway flipped to Team Stadium, and along with a tie-breaking vote from Board President Lewis Reed, the measure passed 5-4.

Ogilvie was lauded, rightly, by the Post-Dispatch's Tony Messenger for standing up for city taxpayers, but what are we really celebrating here? Even if you consider the $17 million in overall savings, the city will still be paying something in the neighborhood of $43 million dollars. And that money, funded by a separate increase in the city's "use tax," could provide funding for other things the city needs. Instead, city residents are going to be asked to give it all up. For soccer.

Yes, it's nice that the amended bill makes the entire deal contingent on support from the state, and the amendment also bars the city from using general revenue pay off the $60 million. It's doubly nice that another amendment would force the investment group to cover the cost if the tax increase fails to generate enough revenue — and that this plan is even going to a vote. We haven't been so lucky in the past.

But just for comparison's sake, $43 million is about four times the amount Governor Eric Greitens is proposing to cut from community colleges this year. Put another way — even if the stadium is predicted to generate positive revenue over 30 years, you could still do a lot of present-day good with $43 million.

Also, in grand St. Louis tradition, the soccer stadium project is one that benefits an already-developed area, downtown, and it would enrich those already benefiting from the city's focus on the central corridor. Even amended, the bill would send $5 million in tax incentive funds to Paul McKee, because truly St. Louis is a madhouse mirror maze of interlocking special tax districts and development deals.

Something else to consider. Four hours before the committee's vote on the soccer stadium deal, 4th Ward Alderman Sam Moore excoriated a spokesman advocating for a bill to fund renovations for the Scottrade Center, home of the Blues. Moore held up two large glossy photographs of gutted brick houses in north city.

"This is my community. And we're talking about fixing up a hockey stadium or soccer stadium," Moore said.  "I'm sick and tired of asking to get help in the third world America of north St. Louis, Missouri."

The spokesman didn't have an answer.

It is notable that for all the mayoral campaign jostling on the Board of Aldermen, the final (second final, that is) committee vote on Thursday featured two aldermen running for mayor. Antonio French, who sits on the Ways and Means Committee, wasn't taken by initial bill and didn't much like the amended version either. He voted no, twice. But Board President Lewis Reed, who rarely participates in votes, stepped in and cast the deciding yea for Team Stadium.

Hours later, Reed's campaign sent out a press release, touting the candidate's success in allocating tens of thousands of dollars to "crime prevention and education of our youth, supplementing twenty-five organizations across St. Louis."

The release didn't mention anything about tens of millions to the stadium.