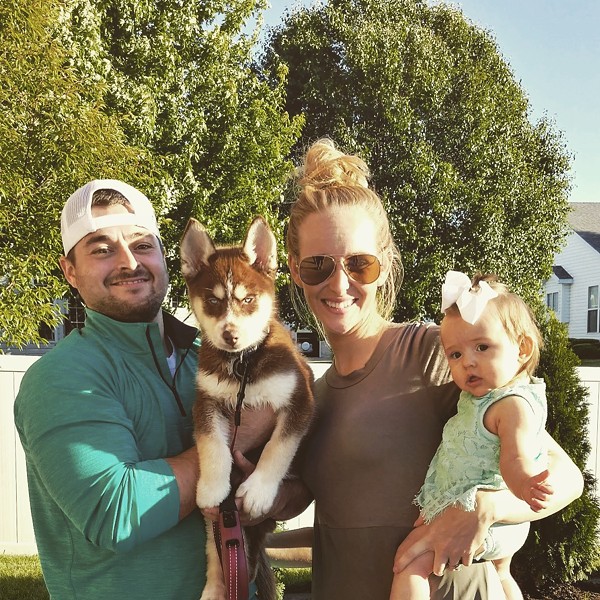 On May 21, Jacob and Mariah Reichenberg family purchased their husky puppy, Maverick, from a pet shop in Lake St. Louis. In barely more than a week, he was dead — victim of the virus known as parvo.

And the Reichenbergs are not alone. Six months before, another family, the Sinclairs, purchased a husky puppy, Hunter, from the very same store. Within a week, Hunter, too, had died. Again, parvo was to blame.

Now the shop that sold the families the dogs, a Petland franchise based in Lake St. Louis, is facing some heat. Both families have now filed complaints with the Missouri Attorney General, which has a special unit tasked with investigating canine cruelty. They're also working with Dan Kolde, an attorney who specializes in animal cases, to bring attention to the issue. (KMOV did a segment about the Reichenbergs' dog last night.) A protest to "Remember Maverick" has been scheduled for Saturday.

Petland has long been under fire from animal activists. As one of the only pet stores in the area to sell dogs from breeders, not just rescue pups, it's been the subject of regular protests for quite some time now.

And Kolde believes the recent deaths illustrate why Petland has become a target. "Petland knew it had a parvo problem in December," he says. "Yet the exact same thing happened in May. I have no idea how many others are out there."

But Jeff Hoffmann, owner of the Lake St. Louis franchise, says that parvo is a problem that can affect anyone dealing with young dogs, whether it's a shop working with breeders or a rescue organization. He says the breeder that supplies huskies to the shop is a good one, and that he has nothing to be ashamed of — and no intention of allowing the protesters to force him to change his business model.

"Parvo is something that just happens," he says. "It's horrible, and it's rare, but it happens."

Were Maverick and Hunter the only parvo deaths from puppies purchased at the shop in recent months? Hoffmann allows that "we may have had one other customer that was impacted." He says damp weather can be a factor in the virus spreading, which made for tough conditions this spring. "Still, for the most part, deaths are rare." The puppies had both received the proper vaccination, he says. And both families have been refunded in full.

For Jake and Gena Sinclair, who lost Hunter in December, the money was cold comfort. Their three daughters had been gifted the husky as an early Christmas gift. "They were devastated," says Gena.

And they were devastated all over again when a family member showed them Mariah Reichenberg's Facebook post. After she reached out to them, they agreed to tell their story.

"It was devastating to all of us as a family," says Jake. "We wanted to move on. We weren't trying to live in the past."

"But to realize it's the same breed of dog, and it happened almost exactly the same way — it needs to stop," says Gena. "We don't want to see it happen to another family."

Months after Hunter died, the family finally got another dog. But this time, it was an older dog, one that already had all his shots and had no risk of contracting parvo. Says Gena, "We were too scared to get another puppy."