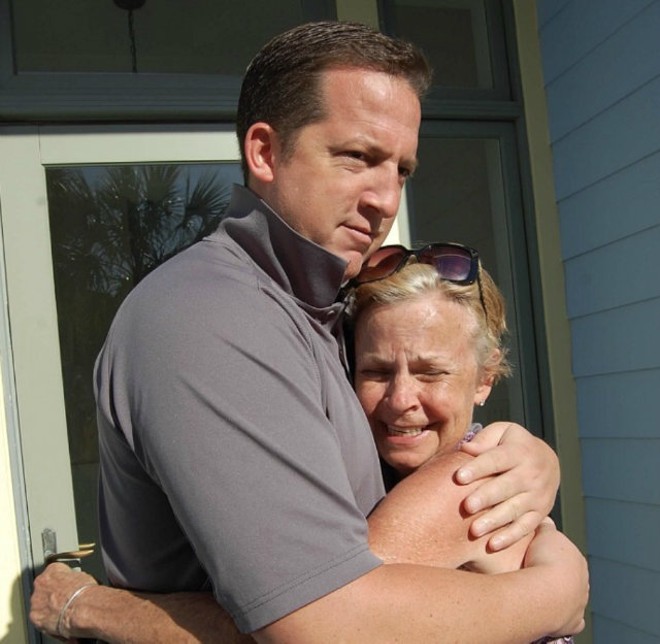 Former St. Louis Blues right-winger Jim Campbell is seeking an order of protection in St. Louis County Circuit Court against his mother-in-law — claiming that he fears the 68-year-old woman will physically harm him.

But the lawyer representing Linda Henley says in a letter to the former hockey star that his assertions are simply ridiculous. As a professional athlete, notes attorney Albert Watkins, Campbell "punched in at 6'2", 205 pounds" — adding, "It is understood you've put on more than a handful of pounds since."

Henley is much smaller: Campbell writes in his own petition that she's 5'7" and 140 pounds (although, it should be noted, the hockey star isn't one for details: asked to provide the color of his mother-in-law's eyes, he writes, "blue?").

Yet by filing the petition, the 44-year-old Campbell is accusing the "frail" grandmother of "knowingly and intentionally" placing him "in apprehension of immediate physical harm," Watkins writes.

"Perhaps your future-former mother-in-law should have played professional hockey," Watkins snipes. "She must be tough too. Can you imagine, Grandma Linda on skates! What a sight. I wonder if she shoots left."

The origins of the dispute are in a divorce making its way through St. Louis County Circuit Court. Records show that Henley's daughter, a Kirkwood resident, filed for dissolution of her marriage to the former hockey star last October.

The allegations at issue in Campbell's petition took place more than a year later, on November 24 — the evening after Thanksgiving.

On that night, Jim Campbell writes, he was in the family home with his mother-in-law as his wife moved out her things. When Campbell asked Henley to return her key to the house, she allegedly responded, "I don't have it and if I did I wouldn't give it to you!"

Continues Campbell, "Then she went on to say, 'We are going to sneak up on you in the night and get you!' Then she raised her hand up to hit me and I quickly backed away." Campbell says he then filed a police report.

In his four-page letter, Watkins repeatedly ridicules the "abject idiocy" of Campbell's filing. After insulting the former pro athlete's superior size and profligate use of exclamation points, Watkins threatens to sue him if he doesn't drop his request for the court order.


As a final matter, it is always important to remember that words can hurt. For example, it is not nice to call someone a drug addict when they aren’t one. This is especially true when the recipient of the defamatory label is the law abiding, ever gracious, picture of Midwest charm, grandmother of your children.

Demand is hereby made for the full and immediate cessation of the publication, utterance, communication or other dissemination of defamatory comments and statements of and about my client, especially to her grandchildren.

Failure to do so, Watkins adds ominously, "will result in the immediate pursuit against you of all available legal and equitable remedies."

Then he gets to the kicker.


In short:
1. Dismiss the ridiculous Adult Abuse Protection Petition you filed;
2. Get my client’s stuff back to her; and
3. Quit talking smack talk about your kids’ grandma.

Watkins' letter gives Campbell until 2 p.m. today to drop his request for an order of protection.

Campbell did not respond to our email seeking comment last night.

Campbell, who played 285 NHL games, found his greatest success in his four seasons with the Blues, from 1996 to 1999. He retired in 2006, and six years later, he and his wife purchased and renovated the Geyer Inn, a beloved bar in Kirkwood.

More than a year after the Campbells filed for divorce, court records show the two arrived at a settlement. However, less than a week later, Jennifer Campbell's lawyer requested sanctions against the former hockey star. The case is still pending.