St. Louis to Try a Gun Buyback as Murders Surge Toward 200 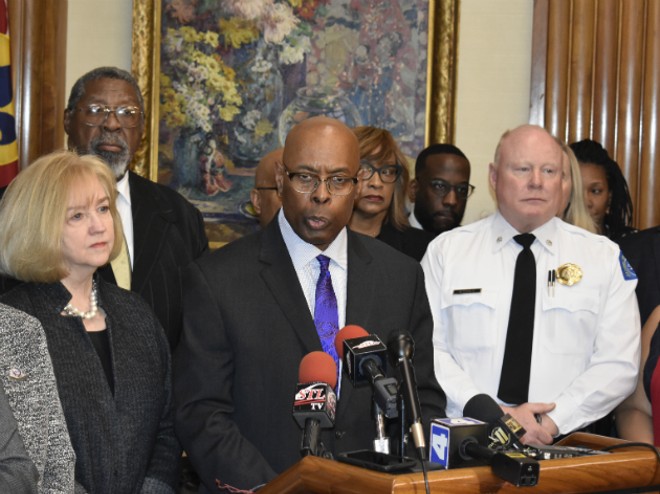 St. Louis officials announced a gun buyback program today as the city struggles through its bloodiest year in more than two decades.

It is not a new strategy, although the city hasn't tried it for nearly a decade. And if the academic studies on the subject are any indication, exchanging Schnucks gift cards for firearms is not likely to do much to lessen crime. But as St. Louis heads toward 200 murders, government leaders say they're hopeful.

"I think it is often easy to criticize a gun buyback program but, frankly, if we get one or two or ten guns off the street that would have been used in a serious crime, I will consider that a success," Mayor Lyda Krewson told reporters at a news conference.

So far, there have been 196 homicides in St. Louis this year, the most since 1995, when there were 204. Keep in mind those totals don't even tally what police consider justified homicides, including police shootings, or crimes that leave victims seriously wounded. It's a big number, easily topping the 188 homicides within city limits in each of the past two years.

The city's new public safety director, former judge Jimmie Edwards, says the effort will target weapons from the city, county and East St. Louis. He has asked chiefs from those police departments to work together to cut into violent crime. He and Krewson say the buyback will be part of a larger strategy to lower the body count.

Edwards says he's not so naive as to believe that drug dealers or gangsters are going to hand in their guns for a cart of groceries. He is instead targeting the "good people" who may know of dangerous firearms in the community.

"My message is simple: Mom, Grandma, Uncle, Dad, give us the guns," he says. "Give us the guns, because that same gun that is in your house may be a weapon used to hurt someone very badly."

Researchers have over the years found that one of the main problems with buyback programs is that while they pull in a bunch of firearms, they're not usually the kinds of weapons typically used in violent crimes. Some of them don't work, or they're family heirlooms pulled out of attics.

Rep. Bruce Franks Jr. (D-St. Louis) who was not among the two dozen government officials and clergy gathered for the announcement at City Hall, criticized the strategy on Twitter.


1991 Gun Buyback was done after my brother was killed! 1st one in STL. 7500 guns where removed! So again as you see the numbers, Buyback then what? https://t.co/EpglpRmHor


Edwards says the organizers will try to screen out weapons from rural areas outside of the metro and others that are basically worthless toward their goals.

At best, studies show, the programs can hope to eliminate guns that might be stolen from ending up in the wrong hands, but the odds aren't great. Not that stolen guns are not a problem. St. Louis interim police Chief Lawrence O'Toole told reporters that a lot of the weapons used in crimes have been stolen, often out of cars. There have also been a string of gun store burglaries lately in the county.

But gun stores aren't turning in their guns at buyback programs, and neither are people keeping them in their cars for protection. Buybacks can, however, raise awareness of gun violence, academics say, which can lead to discussions of more solutions.

And this one isn't going to cost St. Louis taxpayers. The program is being financed through donations, mainly from the Bar Association of Metropolitan St. Louis. Edwards says the St. Louis Police Foundation and Backstoppers are also supporting the effort.

Editor's note: The St. Louis Police Foundation is one of the supporters. An earlier version of this story incorrectly identified the organization.