Lawmakers Begin Call for Greitens Resignation — 'Stick a Fork in Him' 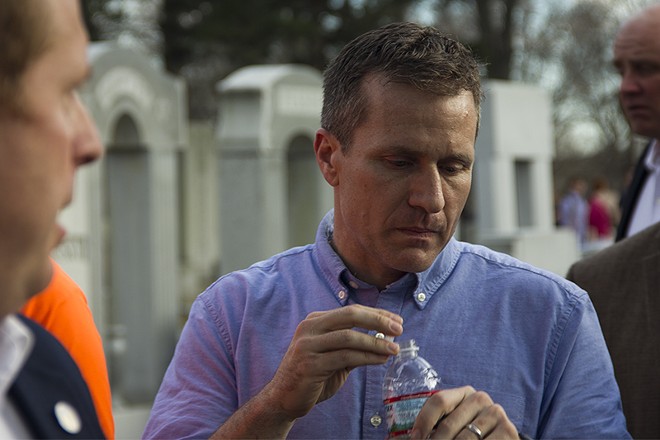 As the scandal around Governor Eric Greitens' infidelity and alleged blackmail swirls into a maelstrom, some state lawmakers are already calling for resignation. And the calls are not restricted to members of the opposing party.

Senator Rob Schaaf (R-St. Joseph), a Republican who has nevertheless been a major Greitens target, tweeted "stick a fork in him" Wednesday night, following a KMOV report that featured a recording by an unnamed woman telling her then-husband about a sexual encounter with the married Greitens in 2015. The woman said that while she was blindfolded and restrained, Greitens snapped a photo without her consent. The woman's ex has since released the recording and given interviews criticizing the governor.

In the recording, the woman said, of Greitens, "He stepped back, I saw a flash through the blindfold and he said, 'You're never going to mention my name, otherwise there will be pictures of me everywhere.'"

Greitens has since admitted to the infidelity — "This was a deeply personal mistake," he said in a statement — but he's denied the blackmail allegation, and through his lawyer has insisted there was "no violence. No picture taken. No threat of blackmail."

Not surprisingly, Greitens' fellow Missouri lawmakers, who he's frequently derided as "career politicians," show little inclination to give him the benefit of the doubt.

Stick a fork in him.


Indeed, a growing number have released statements expressing various forms of "deep concern" over allegations, and calls for a formal investigation are building steam.

Senator Doug Libla (R-Poplar Bluff) is reportedly circulating a letter among lawmakers to send to Attorney General Josh Hawley. Meanwhile, state Representative Kevin Engler (R-Farmington) told the St. Louis Post-Dispatch that if the allegations are true, "then the governor's an honorable person, and he'll do the right thing."

With an allegation that cuts to the core of the governor's integrity, Senator Gary Romine (R-Farmington) called for an investigation to begin as soon as possible.

“The only way we can remove this cloud is to get all the facts,” Romine told the Kansas City Star. “We need this to move as quickly as possible. If it exonerates him, we can move on. If it doesn’t, he needs to resign or face impeachment.”

On the Democratic side, the calls for resignation began last night with Democratic State Senator Jamilah Nasheed, who tweeted, "WE MUST END THE CULTURE OF CORRUPTION," a none-too-subtle reference to Greitens' frequent calls to rid Jefferson City of those aforementioned career politicians.

WE MUST END THE CULTURE OF CORRUPTION. I'm calling on Governor Greitens to resign immediately and give Missouri the opportunity to restore some dignity to the governor's office.


Democratic Senators Gina Walsh (D-St. Louis) and Shalonn "Kiki" Curls (D-Kansas City) have also spoken out to encourage a formal investigation. "People accused of these egregious acts do not get to waive off the scrutiny of law enforcement simply because they are in a position of power," Curls said in a statement released this morning. "Victims of these crimes deserve our full support."

Indeed, some Democrats insist that Greitens should face a criminal investigation. Senator Brandon Ellington (D-Kansas City) went as far as telling the Star that Greitens' actions could constitute a felony, adding, "Due to the serious nature of these accusations, I believe Eric Greitens cannot effectively function as governor and I strongly urge him to resign.”

It's worth noting that Missouri law actually contains no specific prohibitions against blackmail or extortion. Invasion of privacy, as defined under state statute, would require prosecutors to prove a suspect "create[ed] an image of another person, without the person's consent, while the person is in a state of full or partial nudity and is in a place where one would have a reasonable expectation of privacy." A conviction would result in a class A misdemeanor, which carries up to one year in prison and a fine of up $2,000. If the photo is distributed, which is not being alleged in this case, the penalty would rise to a class E felony and up to four years in prison.

Floating behind the talk of criminal investigations and resignation is the woman at the center of scandal — the unnamed woman whose husband secretly recorded her confession in 2015, and then, three years later, provided that recording to various media outlets. Whether she considers herself a victim is unknown. According to a transcript of the recording, she said Greitens later apologized and told her that he'd erased the photo. The two continued to see each other.

Crucially, the woman has refused to grant interviews about the affair, but that didn't stop KMOV from splashing the story just hours after the governor's State of the State speech last night. The absence of her voice in this growing scandal — and what it means for coverage of this story going forward — shouldn't go unnoticed.

Update 4:20 p.m.: The calls for an investigation into Greitens' alleged blackmail have gone beyond the legislature. In a statement released this afternoon, St. Louis' top prosecutor, Circuit Attorney Kim Gardner, announced that her office is digging into the case.

The serious allegations against Missouri Governor Eric Greitens are very troubling. After further consideration, I have decided to launch a formal investigation into the alleged actions of Governor Greitens.

It is essential for residents of the City of St. Louis and our state to have confidence in their leaders. They must know that the Office of the Circuit Attorney will hold public officials accountable in the same manner as any other resident of our city. Both parties and the people of St. Louis deserve a thorough investigation of these allegations.

If anyone has any information related to this matter, I encourage them to contact my office immediately.

Jump to comments
« Eric Greitens Is in the Hot Seat. B…  |  Driver Charged with Being Drunk in… »