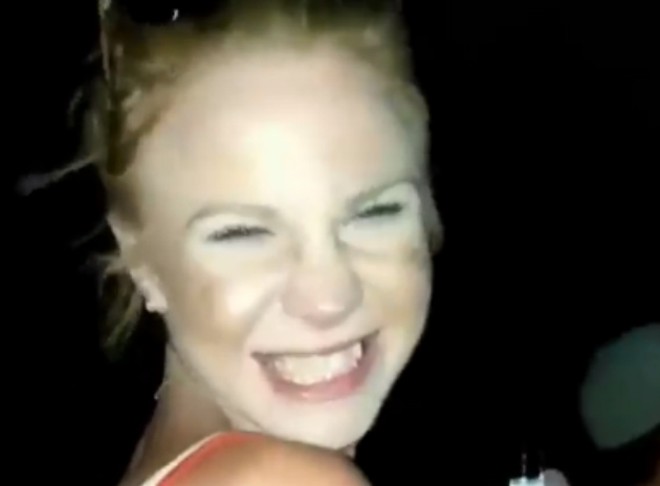 Update: The U.S. Air Force is investigating after people identified the woman as a new enlistee. In a statement, a spokeswoman said, "We have been made aware of a video online of an alleged reserve Airman who made racially insensitive comments. We are looking into the matter and we appreciate this being brought to our attention."

The full statement is posted at the bottom of the story.

Guess she'll be hunting for a new job.

A Jefferson County woman filmed in one of the most racist, redneck Missourah scenes imaginable was fired from her south county waitressing gig today after the video went viral.

In the clip, twenty-year-old Tabitha "Tabbie" Duncan, Michelob Ultra in hand, rides atop a truck as it rambles down a dirt road in the dark. It's pretty standard small-town idiocy, until a mostly off-camera narrator starts in with some jarring racism.

Another idiot in a baseball cap: "We're going n****r hunting."

That's a lot of terribleness for a fifteen-second SnapChat, horrifying enough that someone snatched the video and unleashed it on Facebook. Social media sleuths quickly identified Duncan as a waitress at Social Bar and Grill (4265 Reavis Barracks Road, 314-833-3241). That led to a pretty energetic social media campaign to fire Duncan.

Social, a breastaurant based in south St. Louis County, had previously featured Duncan prominently in a number of its social media posts. Shortly before lunch, the bar pulled down those Facebook posts and issued a statement, announcing Duncan had been canned.

Duncan's personal Facebook page previously included some pro-Trump memes and a meme bashing NFL players for kneeling during the national anthem. Yesterday, she shared a quotation about everyone making mistakes. The quotation, which apparently originated on a different page, reads, "Everyone makes, mistakes in life, but that doesn't mean they have to pay for them the rest of their life/sometimes good people make bad choices/It doesn't mean they are bad."

Soon after posting it, she shut down her page.

Here is the full statement from U.S. Air Force:

We have been made aware of a video online of an alleged reserve Airman who made racially insensitive comments. We are looking into the matter and we appreciate this being brought to our attention. The U.S. Air Force values diversity and inclusion; our Airmen come together to produce an incredible team that can accomplish any mission and overcome any challenge. We believe that our greatest asset is our diverse, innovative and technically-savvy workforce. Our Airmen come from all backgrounds and remarks such as these do not fall in line with our culture. We take incidents like this very seriously and action will be taken upon further investigation as necessary.