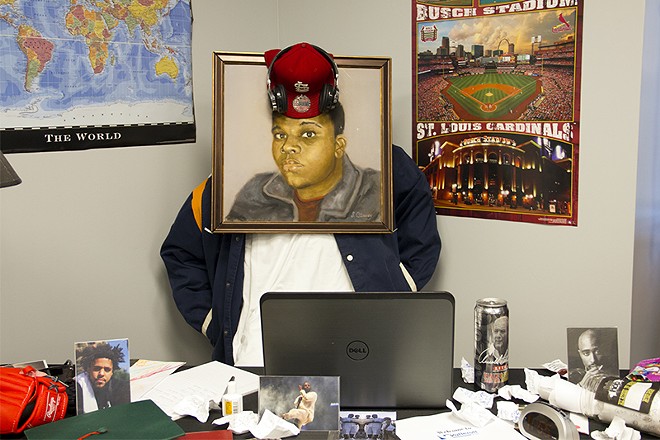 Even under the normal circumstances of grief, five years is hardly enough time to heal. And when the subject of that grief is Michael Brown, whose death in a 2014 police shooting in Ferguson sparked protests and a national reckoning with policing policies, five years hardly feels like any time at all.

But in this weekend's fifth-anniversary events, the memorial organized by Chosen for Change, the non-profit founded by Brown's father, set out to bring the perspective down to earth, to "humanize" Brown as he was in life, as a high school graduate, brother, son and cousin. As "Mike Mike."

During a ceremony on Friday, Brown's family gathered along the patch of pavement where the unarmed eighteen-year-old was shot and left on the ground for four hours on August 9, 2014. The section of road was removed and replaced in 2015. But the family's pain remains fresh.

During the memorial service, one of Brown's sisters, in tears, eulogized her brother as if she was speaking directly to him.

"We are just waiting for that moment when we can open our eyes and you are right there," she said. "We are waiting for the day we can see your smile again. All of your siblings got to see you graduate. In these five years, three of your sisters have walked across the stage. You weren’t there in person, but we knew you were there in spirit, watching over us like you have always done." 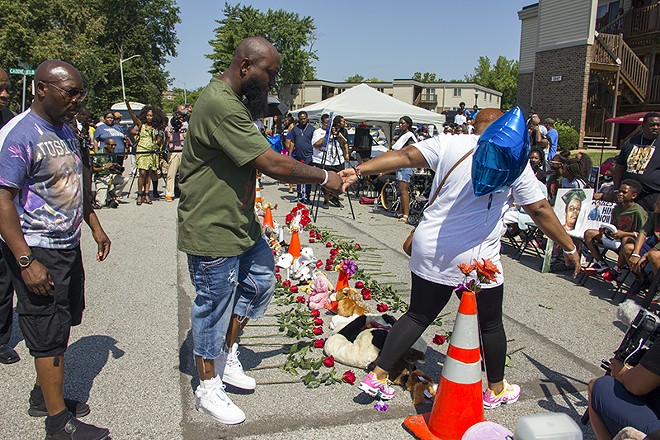 This is a different sort of anniversary than previous years. In 2017, the day arrived when tensions were at their highest during the trial of a St. Louis city police officer accused of murder. In 2018, the shocking electoral win of Wesley Bell over longtime St. Louis County Prosecutor Bob McCulloch — whom many blame for the non-indictment of Ferguson police officer Darren Wilson — led to renewed calls for reopening the case.

This year, too, Michael Brown Sr. called on Bell to investigate his son's death, and for "evidence to be reanalyzed, and accountability to follow."

But in Friday's ceremony, which featured step dancers, poetry recitations and a vocalist group, the mood was personal, the emotions still raw.

After Brown's sister concluded her remarks, Chosen for Change Vice President Jana Gamble took the mic and told the crowd, "This is a family suffering and grieving in public for five years. It's time to re-humanize Mike Brown Jr." 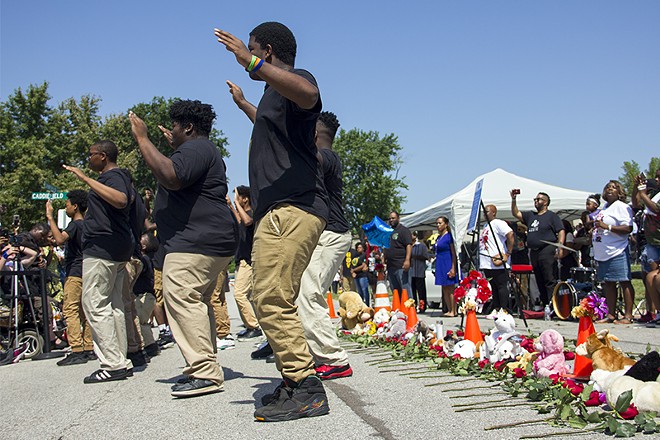 To see Michael Brown the way his family did, the organization engaged artists to build a multimedia exhibit, "As I See You: A Tribute to Mike Brown Jr," which featured images of the protests and artwork inspired by Brown's death.

And in a way, Brown was there in person, staring out from a framed portrait upon which someone had placed one of the slain teenager's Cardinals baseball caps and pair of headphones.

Beneath the portrait, a mannequin's body had been dressed in one of Brown's jackets, the hands shoved into the pockets. This specter of Brown sat at a desk covered in the teenager's possessions, including a baseball glove, a welcome packet from Vatterott College and scraps of paper on which he'd scribbled rap lyrics.

While this exhibit is among the most personal efforts by Brown's family to memorialize him, this year his parents have opened up even further on their grief. In a lengthy conversation with St. Louis Public Radio's Marissanne Lewis-Thompson, Brown Sr. described how he'd only only recently requested the autopsy photos of his son, and how, at one point after the shooting, one of his daughters was assigned a school report about the incident.

"They had they had to sit through all this, you know, and listen," Brown Sr. said, describing his other children's experience after the shooting. "It was pretty devastating for them, you know? Just to know that people ... thought that, you know, basically he deserved it, as they say."

Indeed, there are plenty of people who are willing to fill comment sections with their arguments for why Brown deserved what happened to him, and others continue to argue that the protest movement he inspired is based on a lie. On Friday, the spokesman for St. Louis city's largest police union took to Facebook to wish ex-Officer Wilson a "Happy alive day."

Five years later, Michael Brown's life remains inextricably linked to the movements and national conversation that came after. In the "As I See You," exhibit, the focus on Brown's humanity is presented alongside images of the protests he never got to see. The exhibit's location, the Urban League’s Ferguson Empowerment Center, was previously the home a QuikTrip gas station that was burned one day after Brown's death. 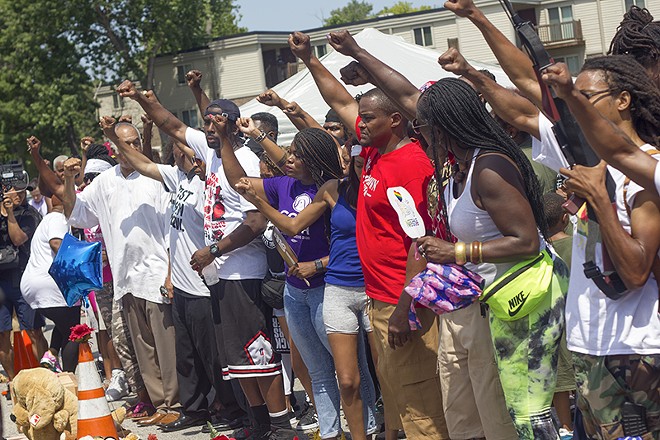 In general, much of the attention drawn to this year's anniversary grappled not with Brown's humanity, but with broader issues of police policies and unhealed racial tension. The St. Louis Post-Dispatch published pieces focusing on the future of Ferguson and the region's racial disparities. St. Louis Public Radio KWMU produced an ambitious package of interviews that covered the black experience of "The Talk" as well as individual reflections on the Ferguson protests and dealing with police. National outlets focused on how little has changed in terms of healing the cracks in society that were exposed during the protest and its aftermath.

Of course, the anniversary also drew energy from the presidential race. On Friday and Saturday, no less than six Democratic presidential candidates tweeted statements about Ferguson and Michael Brown. The campaign of Bernie Sanders tweeted that "Michael should be alive today," and released a video featuring Cori Bush, a Ferguson protester now challenging Democratic Congressman Lacy Clay for a seat in the U.S. House of Representatives.

Between the protests, the politics and the still-unsettled debate over what "really" occurred between Brown and Darren Wilson, the legacy of Ferguson is as complicated as ever. To his family, though, the legacy of Brown is simple.

"Even five years later, we have people who don’t see Mike as a human being," Cal Brown, his stepmother, told the St. Louis American in July. "The main goal is to humanize him. The media spent a long time dehumanizing him, forgetting that he was someone's son, brother, cousin, grandchild, friend. I just want people to see who he really was."