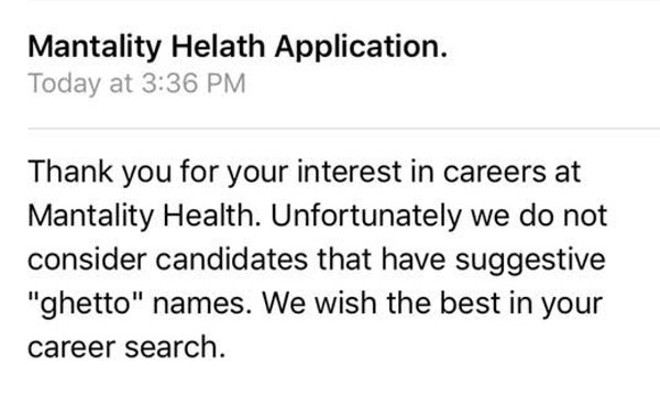 In August 2018, Christopher Crivolio had a terrible idea. He sent out a raft of wildly racist rejection messages from a Chesterfield-based health clinic to black job applicants citing their "ghetto names." And he signed the those messages with a name of a former coworker.

Now, Crivolio is facing the consequences. After pleading guilty in federal court to a single charge of identity theft, he appeared at a sentencing hearing on Wednesday. Identity theft carries a maximum of five years’ imprisonment and a fine of $250,000. What he got, per a judgement by U.S. District Court Judge John Ross, was four years' probation and an order to pay just under $45,000 in restitution.

The sentencing seems to conclude a bizarre saga that generated widespread news coverage and outrage — including a lawsuit by one of the applicants — in response to what at first appeared to be a shockingly direct example of the real-life hiring discrimination against black job applicants and the racism regularly encountered by job applicants with non-white-sounding names.

At the time, Crivolio had recently been fired from his job at Mantality Health. But he'd apparently been able to access his former employer's account on Indeed.com. He used that access to reply to job applicants, and to sign the messages with the name of a nurse practitioner still employed at Mantality.

Crivolio's messages, which went to twenty applicants on August 13, 2018, read: "Thank you for your interest in careers at Mantality Health. Unfortunately we do not consider candidates that have suggestive 'ghetto' names. We wish the best in your career search."

One day later, the Riverfront Times and other outlets reported the story. Screenshots of the messages had already gone viral on Facebook as recipients shared what they thought were cruel rejections based not on their qualities as workers, but their names and race. One of the applicants, an O'Fallon business manager named Hermeisha Robinson, posted a screenshot of the message to Facebook with the caption, "My feelings are very hurt and they even got me second guessing my name trying to figure out if my name is really that 'ghetto.'"

Of course, after those first reports came out, the story only got stranger. In subsequent interviews with RFT and other outlets, Mantality owner Kevin Meuret revealed that an ex-employee had breached the company's Indeed.com account as a "personal attack" on the ex-coworker.

"I'm deeply upset that her name was tied to something that disgusting," Meuret told RFT at the time. "Anyone associated with her knows that doesn't match with anything she's said."

Nearly a year later, an FBI investigation led to a federal indictment for identity theft against Crivolio, who in turn pleaded guilty on July 30.

According to a Wednesday press release, Crivolio's no-prison-time sentence for identity theft is based on his use of a former coworker's identity "with the intent to commit harassment."

According to a copy of the judgment, about $39,000 of the total restitution amount will go to Mantality. The target of Crivolio's racist hoax — according to a previous press release, she faced harassing phone calls and had to temporarily relocate — will receive $5,500.