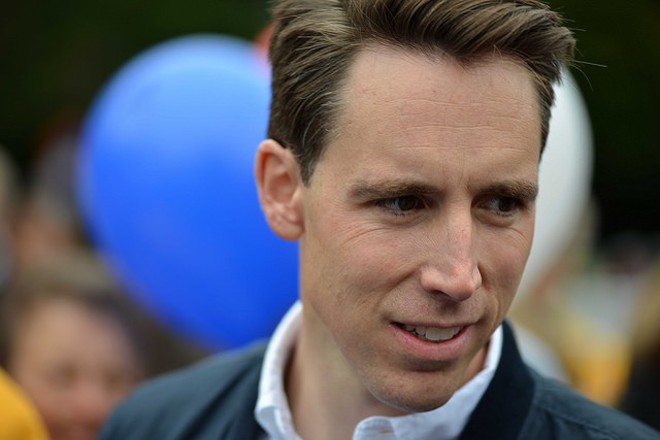 Being a hypocrite and a narcissistic weasel is not against the law, so Josh Hawley probably won't face any legal consequences as a result of a newly released state audit.

The toothy 40-year-old became a rising star in the Republican party when he was elected in 2016 as the state Attorney General, campaigning in part as the antithesis to the ladder-climbing "career politicians" who ceded their duties to lobbyists and political consultants.

But state Auditor Nicole Galloway's investigation (a copy of the report was released today and can be read here) confirmed earlier reporting by the Kansas City Star that he immediately brought in campaign-funded political consultants to guide his taxpayer-funded staff as they worked to push his agenda and promote him on the national stage.

The audit cites emails from Hawley's first weeks in office between consultants from OnMessage Inc. and the attorney general's staff in which they're already trying to align the public servants with the political branding. In a January 19, 2017, email to the A.G.'s staff, OnMessage's Gail Gitcho weighs in on the consultants' plans for weekly conference call between the campaigners and government employees.

"Sounds great," Gitcho writes. "If we can do a call next Tuesday or Wednesday that would work great because I am having lunch with [Fox News host] Chris Wallace on Thursday and was going to pitch Josh as a power player of the week - but we should all get on the same page before I pitch him."

Other emails, Google calendar docs and text messages reviewed as part of the state audit depicted the consultants meeting in person with staff, lining up "punch lists" for the attorney general's agenda and generally laying the groundwork for Hawley's campaign for higher office.

All that might strike anyone who was swayed by Hawley's still-warm campaign for attorney general as strange.

"Jefferson City is full of career politicians just climbing the ladder, using one office to get another," Hawley said in a 2016 campaign video, in which he strides past suited men literally climbing ladders. "I'm Josh Hawley. I think you deserve better."

Despite promises that he was dedicated to the work of the attorney general, there were early signs that Hawley was not super interested in grinding out the day-to-day drudgery of the job and instead had his eyes on then-Senator Claire McCaskill's senate seat.

In 2018, the Riverfront Times published photos of Hawley pumping iron during mid-morning gym sessions in Columbia — a curious schedule and location given that taxpayers might have expected their attorney general to be at work 30 minutes away at his office in Jefferson City. He was little more than a year into his term as A.G. at the time.

He had already declared his candidacy for U.S. Senate, officially announcing in October 2017 — roughly ten months after taking office as attorney general — that he would challenge the incumbent Democrat McCaskill.

OnMessage, the firm that had been advising the attorney general's staff since January 2017, ran Hawley's ultimately successful senate campaign.

State auditors say the extent of the coordination between the consultants and government employees is not clear, given that some of the correspondence was through private email and texts. And the apparent influence of the paid campaigners on state business might seem sketchy, but it probably isn't illegal, the auditors concluded.

"While these interactions between consultants and government officials give the appearance of using state resources for political purposes, no evidence exists of a violation of state law," says a news release announcing the findings.

Hawley had previously attacked the Kansas City Star's reporting, which relied on emails and texts obtained by the paper, as "absolutely false." He has spent recent weeks trying to get ahead of the audit report, framing the investigation as a politically motivated hit job by Galloway, a Democrat who is running for governor. This morning, his campaign emailed supporters, announcing that Hawley was filing a complaint against Galloway with the state Board of Accountancy.

Among the accusations included in the letter from Hawley's attorneys to the board were claims that Galloway had used her taxpayer funded office to advance her political career. The campaign then sent out another email, simultaneously alleging that the audit was biased and that it was a "total exoneration" of his actions as attorney general.

The state Republican party followed with a call for an investigation into Galloway's "misconduct" in conducting the audit.

Galloway noted during a news conference today that the audit was conducted at the request of Secretary of State Jay Ashcroft, and she denied there was any political agenda. Ashcroft is a Republican.

"The unfair attacks by Senator Hawley in an attempt to deceive taxpayers about the nature of this audit are disturbing, but unfortunately, they are not surprising," Galloway said. "My career staff carried out this audit professionally and in adherence to professional audit standards, sometimes in the face of abusive attacks. Now that all of the facts are available, it is clear that this report is based solely on evidence provided by current and former Attorney General's Office staff and political consultants who worked with the office. There was no bias."

Regardless, the audit findings are unlikely to hurt Hawley with his supporters, who see him as a potential heir to Donald Trump. The freshman senator has been a vocal ally of the president, backing him without caveat during the impeachment trial as Democrats laid out the details of Trump's attempts to pressure Ukraine into investigating a political rival.

While other Republican senators conceded Trump's guilt but balked at removing him from office, Hawley described the process as the "Democrat's charade" in an email to campaign donors.

"I am proud that my colleagues and I stood strong," he said, "and that we never backed down from what we knew was right."