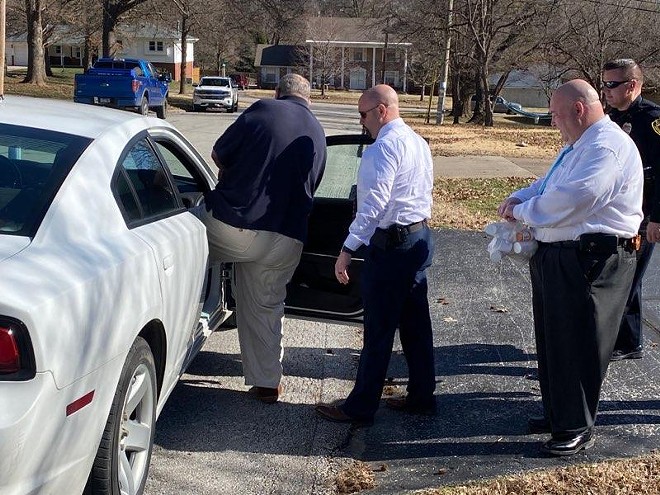 He was "Priest 80," but after a Missouri prosecutor filed criminal charges alleging sexual assault, that unnamed priest was revealed this week to be Frederick Lutz. Until now, the retired priest living in Springfield had been identified only by a number in a report issued last year by the Missouri Attorney General — just one among 163 cases of reported priest abuse.

On Thursday, Lutz, 76, pleaded not guilty in the Circuit Court of Stoddard County. He's currently in custody on a $125,000 bond, charged with two counts of statutory sodomy, one count of sexual abuse and one count of forcible sodomy.

According to the probable cause statement, all four charges involve the same then-seventeen-year-old victim; He told investigators that the abuse occurred in 2000 while Lutz was a priest in a parish southeast Missouri.

The fact that Lutz is even facing charges is notable, considering the fact that the allegations against him were known for years to Catholic officials and recorded in the church's personnel files.

But unlike Pennsylvania, the ensuing investigation in Missouri would not involve a grand jury or subpoenas. At the time, the same sort of "invitation" made to Hawley was being repeated in more than a dozen states. Church officials moved to to get in front investigations that threatened to put bishops on witness stands and under oath in depositions. Instead, churches opened their books — and in Missouri, investigators under newly appointed Attorney General Eric Schmitt found years-old allegations against Lutz.

In its September 2019 report, the Attorney General's Office's explained that it was not naming the priests because they had not been criminally charged. But when it came to "Priest 80," the investigators wrote that they found "multiple reports of sexual misconduct with minors occurring in the 1960s and 1970s." In addition, there was a a victim who claimed that in 2000, as "a high school aged child," the then 56-year-old priest had sexually abused him.

Out of the 163 abuse cases contained in church records, the case against "Priest 80" was only one of twelve cases which fell within Missouri's statute of limitations. In January 2020, the Missouri Attorney General's Office referred the case to the office of the Stoddard County Prosecuting Attorney, which dispatched an investigator to interview the alleged victim about the 2000 incident.

In the probable cause statement released this week, the investigator wrote that the alleged abuse occurred between January and February of 2000, and that the victim had met Lutz while taking public school religion classes and doing yard work around the rectory in the St. Joseph Parish.

The victim, who is identified only by initials in the charging document, alleged that Lutz allowed him to leave the room only after he agreed to return the next day with marijuana. The victim was seventeen at the time.

It's worth emphasizing that these details were already contained in the church's personnel files when the Missouri Attorney General began digging for abuse cases in 2018 — and those records for "Priest 80" included a second case of alleged abuse, dating to 1972. Echoing the later allegation, it involved a seventeen-year-old victim who claimed Lutz had gotten him drunk and abused him while he was incapacitated.

According to the court documents, the victim in the 1972 case formally reported the abuse to the Springfield-Cape Girardeau Diocese, but not until 2006, when the statute of limitations for bringing criminal charges had already passed.

And yet, even with that information in hand, church officials seemingly did nothing. Lutz served as a pastor in the St. Mary Parish in Lamar until his retirement in 2011. Then, in October 2018, two months after Missouri Attorney General's Office launched its clergy abuse investigation, the Springfield-Cape Girardeau Diocese put out a press release announcing that Lutz had been accused of "sexual abuse of a minor."

However, the press release noted only that "The allegation pertains to a period in the early 1970s." The diocese's press release appeared to omit the fact that the victim had lodged a formal complaint with the diocese in 2006, when Lutz was still performing active service as a pastor.

The press release also contained no mention of the 2000 incident, even though, according to the Stoddard County investigator, Lutz had directly approached the victim's father and apologized for what he'd done.

Indeed, in comments this week to a Cape Girardeau CBS station, Stoddard County Prosecuting Attorney Russ Oliver said he was disappointed by the church's reaction to the pending charges.

"They declined to have a sit down meeting with us about this," Oliver told KFVS-TV (Channel 12) on Thursday. "I was really hopeful with the statements that the church has made in the past about being serious about priest abuse. In my experience that's not what they followed through with this investigation."

As for the Springfield-Cape Girardeau Diocese, a spokeswoman released a statement on Wednesday, claiming "the Diocese had previously reported the allegations against Fr. Lutz in Stoddard County to the then-county prosecutor years ago when the allegations were initially made."

That was news to the Stoddard County prosecutor. Reached by phone this afternoon, Oliver told Riverfront Times that he's yet to see any evidence of church officials reporting Lutz's actions to a previous prosecutor.

"I've heard the diocese say that," Oliver said. "I've not seen anything in my office that documents that actually happening.

Oliver also noted that his office is still seeking information on additional victims. Anyone with further details can contact the prosecutor's office at 573-568-4640, extension 4.