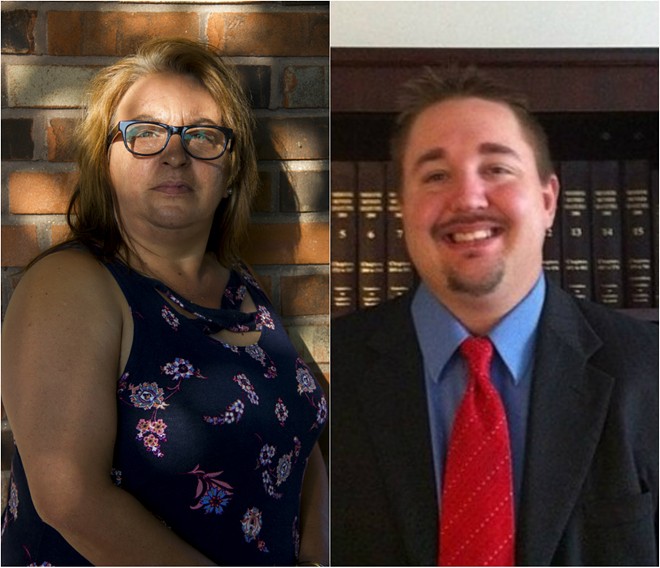 Jerrod Mahurin, the former elected prosecutor of St. Francois County, is attacking the credibility of a fired employee whose newly filed lawsuit names him in multiple allegations of sexual harassment. Part of Mahurin's defense is the argument that the employee wore raunchy sweaters.

Mahurin's remarkable retort came during a Thursday interview with the Daily Journal, the paper of record for St. Francois County, a mostly rural region located about an hour's drive south of St. Louis.

During 2018 midterm elections, the citizens in St. Francois County voted Mahurin out of office. Earlier that year, a Riverfront Times investigation revealed that some county employees and attorneys had long felt alarmed by the prosecutor's behavior, particularly toward his female office staff. Sources who spoke to the RFT claimed Mahurin had, among other things, made a habit of hitting on employees, offering suggestive remarks about their bodies and commenting on their sex lives.

One of those sources, who was named in the RFT story, was an employee with eighteen years service named Lisa Davidson. Mahurin fired her on June 13, 2018, one day after the prosecutor met with RFT for an interview in his office. During that interview, he maintained that he'd never mistreated his employees or sought sexual relationships with them.

Those allegations resurfaced last week, as Davidson's lawsuit features many of the same details first reported by the RFT, including that Mahurin had sent a picture of his penis to a different female employee on the office's clerical staff.

But on Thursday, in Mahurin's response to Davidson's lawsuit published in the Daily Journal, the former prosecutor appeared to not only misconstrue the circumstances under which he'd fired Davidson, but accused Davidson herself of being sexually inappropriate in the workplace — via a sweater that, Mahurin said, "had carrots where her breasts would be."

In the interview, Mahurin slammed Davidson's lawsuit as "outrageous."

Here's how the Daily Journal quoted him:

On one occasion, Mahurin recalled that Davidson wore a sweater to work that contained a box on with a fake penis inside.

“She also wore a shirt that had carrots where her breasts would be, in the office and I had to instruct her not to have any contact with the public while she was wearing that, and to never wear that again,” he said. “So, this is retaliatory because she was fired and, again, has no basis in fact and just completely fictitious.”

First, let's address the sweaters: In a previous interview with RFT, Davidson answered questions about those very outfits, and while she acknowledged that she did wear them, she clarified that she'd worn them only to an office ugly sweater party — a key bit of context omitted by Mahurin in his comments this week.

Mahurin also appeared to omit key details about his decision to terminate Davidson, which is notable as those details do not support his suggestion that Davidson's lawsuit is "retaliatory because she was fired."

In fact, Davidson had begun the process for suing Mahurin months before her firing: In March 2018, she'd filed a complaint with the Missouri Human Rights Commission — the first step in obtaining court approval for filing a lawsuit — which alleged workplace discrimination and retaliation for failing to humor Mahurin's advances. She also faxed a copy of the complaint to Mahurin.

But on June 13, 2018, before the commission ruled on Davidson's complaint, Mahurin fired her. Davidson provided RFT with an audio recording she'd made that day, which captured the moment Mahurin informed her that her career as a county employee was over.

In the recording, Mahurin told Davidson that he'd received the human rights complaint and demanded to know "how that document got in my office." Davidson answered that she sent it by fax, but Mahurin stated he believed the complaint was not authentic and "this appears to be a false document that you tried to provide me with." He then told her she was "terminated immediately" and to collect her things.

In a subsequent interview with the RFT in 2018, Mahurin denied firing Davidson in retaliation for her discrimination complaint.

As for Davidson, her attorney, MaryAnne Quill, told the RFT that Mahurin's statements to the Daily Journal — including the claim that he'd once had to reprimand Davidson for hanging "a giant stuffed penis in one of the attorney’s offices" — were false.

"She worked there eighteen years without incident," Quill wrote in an email, "until she filed the charge of discrimination."

Davidson vs St. Francois County by Danny Wicentowski on Scribd

See also: She Said St. Francois County Prosecutor Jerrod Mahurin Harassed Her. Then He Fired Her