It was a big, big night for incumbent white guys in Missouri's top elected offices.

And it wasn't just actual human conservatives. Amendment 3, a Republican troll job designed to undo an anti-gerrymandering law before it could take effect, survived two attempts by judges to make the wording less deceitful to persuade Missouri voters to undo the wildly popular Clean Missouri legislation passed in 2018.

But the stars of Election Day in Missouri were once again the white guys. Parson managed to obfuscate a disastrous response to the coronavirus by relying on the ever-popular strategy of painting St. Louis as a crime-ridden hellhole that can only be saved by him and other white guys. Challenger Nicole Galloway, who has spent the past five-plus years exposing corruption and waste across the state, focused on policies for combating the pandemic and promised to support Medicaid expansion, the kind of thing that might have prevented the gutting of rural hospitals ahead of a global health crisis.

For secretary of state, incumbent Jay Ashcroft faced Yinka Faleti, an Army vet and West Point graduate, who immigrated to the United States as a child from Lagos, Nigeria. He was a top student who went on to graduate from Washington University's law school and served as senior vice president of the United Way of Greater St. Louis, a state prosecutor and executive director of Forward Through Ferguson.

Facing the embodiment of the American Dream might have seemed like a serious threat to Ashcroft, but he was able to dig into decades of experience of having the name Ashcroft. As a final campaign push, he oversaw a needlessly confusing voting system for casting ballots during a pandemic, fighting off a series of lawsuits that would have made it easier to vote. He won re-election easily.

In keeping with the theme of the night, Lt. Gov. Mike Kehoe, who like Parson moved into his current position following the implosion of ex-Gov. Eric Greitens, rode the white Republican wave to defeat Kansas City's Alissia Cannady, a Black, self-made small businesswoman with a law degree and experience as a councilwoman and prosecutor.

Attorney General Eric Schmitt, the only of the white guy incumbents in statewide office to face a white guy in his race, similarly had an easy time on election night. Along with suing China over the coronavirus, Schmitt was a key player in a Parson-backed plan to strip St. Louis Circuit Attorney Kim Gardner of fundamental responsibilities in murder cases.

An association of state prosecutors, mostly comprising Republicans, publicly said that was a terrible idea, and more than a few people noted that Parson and Schmitt were targeting the city's first Black female circuit attorney, who had been elected by massive margins. But it got Schmitt a lot of air-time in second- and third-tier conservative media, so there was that. He defeated Democrat Rich Finneran, a former Assistant U.S. Attorney, who prosecuted massive fraud cases during his seven years in the St. Louis office. 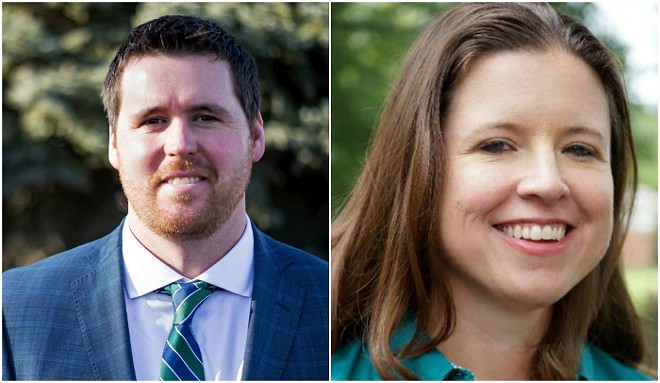 Completing the sweep for the white guy incumbents was Trump acolyte Scott Fitzpatrick, who dropped former state Rep. Vicki Englund in the treasurer's race. This will be his first full-term. He stepped in to fill a void in white-guy leadership created when former state Attorney General Josh Hawley rethought his complaints about ladder-climbing politicians and abandoned his state position in favor of the greener pastures of the U.S. Senate. Schmitt, then the treasurer, moved into his old job.

That left an opening at treasurer, and  Parson appointed Fitzpatrick to fill the spot. It's now his for another term.