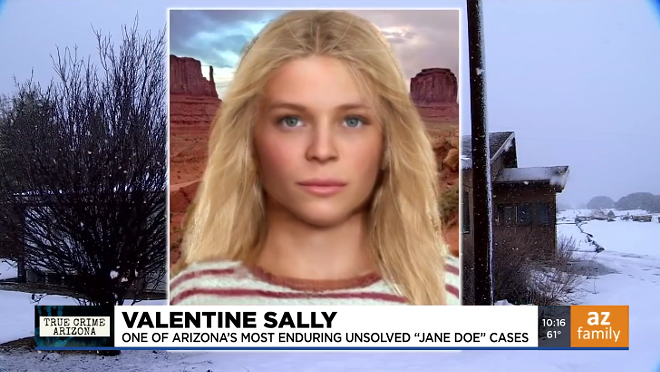 Arizona officials have identified the deceased victim in a nearly 40-year-old cold case as a young woman from St. Louis county.

The homicide investigation is known in Arizona as the "Valentine Sally Case," owing to the fact the victim's body was found on the side of I-40, west of Williams, Arizona, on February 14, 1982. Until now, it's been one of the oldest "Jane Doe" cases in all of Arizona.

Detectives were able to use DNA to identify the victim as seventeen-year-old Carolyn Eaton. According to a press release from the Coconino County Sheriff's Office, officials used grant funding from the National Center for Missing and Exploited Children to pay a private vendor to search its database for familial DNA that matched that of the victim. That testing led them to family members in the St. Louis area.

When detectives spoke with those family members, they were informed that they'd had a sibling run away from home close to Christmas in 1981. Police collected DNA samples from the family, which matched that of the victim.

"Identification of unidentified victims is a difficult and lengthy process and can be costly to agencies looking to identify victims of crimes," the press release reads in part. "Recent breakthroughs in DNA technology have allowed Law Enforcement Agencies to identify victims as well as suspects in cold cases such as these."

DNA technology has helped investigators solve other high-profile cases in recent years.  In 2018, police arrested serial killer Joseph James DeAngelo, dubbed the "Golden State Killer," who evaded California detectives for decades before officials used his DNA to trace his ancestry through a private company. As DNA ancestry companies such as 23andMe and Ancestry.com increase in popularity, police suspect they'll lead to more arrests in cold cases.

As for the case of Carolyn Eaton, police still have no suspects in the open homicide case — but they hope that they'll be able to shake out more leads now that they know who she is.

"Now that the victim has been identified, detectives are working leads that have been developed to identify any possible suspects. Detectives, along with the Cold Case Squad of the Coconino County Sheriff’s Office continue to vigorously work this case," the press release reads, adding, "Sheriff Driscoll wants to thank community members, assisting law enforcement agencies, Sheriff’s staff, and the victim’s family who have worked for so long to identify Carolyn and put some level of closure to this tragic case."