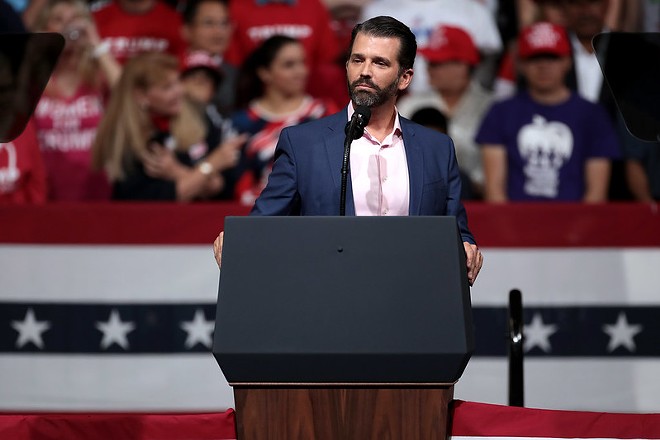 A Missouri conservative group cannot go ahead with an event featuring Donald Trump Jr. despite a reversal from the nation’s largest bank saying it will broker tickets for the speech, organizers said Thursday.

There is too little time left to make the Dec. 3 Defense of Liberty PAC event in St. Charles a success, said the group’s founder, former state Rep. Paul Curtman. The group sold $30,000 worth of tickets to the event through WePay, a subsidiary of JPMorgan Chase, before the company canceled the contract on Nov. 9.

The company reversed the decision on Wednesday, a few hours after The Independent reported the event was canceled, but Curtman said the damage was done.

A company representative called Wednesday evening to relay the change and apologize, Curtman said. When he asked that the apology be put in writing, he said, he received only the statement that was sent to The Independent.

“I told WePay that if they want to turn it back on, I am definitely open to that,” Curtman said. “However, at this point, for this event, we are going to be moving forward with somebody else.”

Defense of Liberty PAC is looking for a date in February when the scheduled speakers are available.

“We are going to take a few days for reorganizing and rescheduling,” he said.

Chase is facing other fallout from the controversy.

State Treasurer Scott Fitzpatrick on Thursday issued a news release that the reversal came after he wrote a letter to Chase CEO Jamie Dimon that the state will not do business with the bank “or any other financial institution that discriminates against customers based on mainstream political ideology so long as that discrimination continues.”

Chase is not currently holding any state deposits, Fitzpatrick wrote in a text message to The Independent.

“I guess Chase has the right to do whatever they want in terms of who they do business with,” Fitzpatrick said Wednesday on the Fox News program Tucker Carlson Tonight. “But in terms of who we, as the state of Missouri, are going to be doing business with, we won’t be doing business with any bank in the state treasurer’s office that chooses to discriminate against essentially half the population, the conservative half of the population.”

And U.S. Sen. Josh Hawley sent a letter Thursday to Dimon demanding “a full accounting” of how the decision was made and why Defense of Liberty PAC was associated with hate, violence, racism or terrorism.

“If your goal was to use the power of your company to stealth-cancel a conservative event, then you succeeded—to the detriment of the people of Missouri,” Hawley wrote.

When it canceled the contract, WePay sent a message to Curtman stating he was violating the company’s terms of service because it was promoting “hate, violence, racial intolerance, terrorism, the financial exploitation of a crime, or items or activities that encourage, promote, facilitate, or instruct others regarding the same.”

On Wednesday night, a spokesperson for JPMorgan Chase wrote in an email that the decision had been a mistake.

“After further review, we determined that this organization didn’t violate the terms of service, and we are reaching out to the client to discuss reinstating the account,” the statement sent to The Independent read. “To be clear, we have never and would never close an account due to a client’s political affiliation.”

Curtman said the reason cited for canceling the contract offended him. They were planning a “vanilla-type political event” with speakers capable of drawing an audience, he said. The group is planning for up to 3,000 attendees.

“This is a very safe event,” Curtman said. “There is nothing outside of the norm to make anybody say, I don’t want to go there.”

The Defense of Liberty events began as a vehicle for promoting Curtman while he was in elective office. He made it a formal political action committee in July and works with Sen. Bill Eigel and former Sen. Jim Lembke to promote it.

The damage is done and we will be unable to complete the event on 3 December due to the loss of ticket selling days. Too little too late from @jpmorgan. We will not let the #cancelculture silence us and @DonaldJTrumpJr —this fight is just beginning. #moleg https://t.co/ZyUwcWyhWQ


“The damage is done and we will be unable to complete the event on 3 December due to the loss of ticket selling days,” Eigel wrote on Twitter. “Too little too late from (JPMorgan Chase).”

There is too much preparation needed to go ahead on Dec. 3 and make it a successful fundraiser, Lembke said.

“The fact of the matter is that it is too little too late,” Lembke said Thursday. “We have incurred costs on this thing that hopefully we will get back.”

The event is expected to cost about $115,000, including venue rental, speaker fees, catering and other expenses, Curtman said.

One problem created by the shifting position of WePay is how the money already received for tickets is being handled, Curtman said. Some purchasers received a refund directly from WePay, but the money from those who have not was transferred to the Defense of Liberty PAC account.

WePay subtracted its commission from the transfer, Curtman said.

Now, if people want refunds and he has to make them directly, he doesn’t have all the money they paid. WePay also adds a transaction fee paid by the purchaser.

“They paid a processing fee I am not going to be able to refund,” Curtman said. “I have to ask them, do they want a refund, or just a reserved seat for the next event? If they all want refunds, it will probably require more money than I have available."