Kim Gardner Defends Her Office — and Meets a Fan

After an hour of listening to St. Louis’ top prosecutor, Terrion Watson approached the front of the Harris Stowe University auditorium and handed a crisp $100 bill to Kim Gardner.

It was November 17, a rainy Wednesday night, and Gardner, the St. Louis Circuit Attorney, was making a rare public appearance for her supporters — and while they gave her frequent applause, only Watson expressed his admiration with currency.

With a look of surprise — and with some amusement — Gardner took the bill from Watson’s outstretched hand. She walked to one of the upholstered chairs set on stage for the night’s event, and, after retrieving a pen from her bag, she signed her name in blue ink across the bill’s back before returning it to its waiting owner.

“I wanted to talk to her so bad,” Watson explained later. With audience members lined up for photos, he hadn’t had a chance to do more than place the bill back in his wallet before she was on to the next person.

“I wanted to tell her I appreciate her,” Watson told the RFT. “I admire her; she’s a hero in my book. She’s one out of a million.”

That’s just one person’s opinion of Gardner, though many would agree with him: Gardner easily won a second term in 2020’s election and remains one of the most prominent examples of the nationwide wave of reform-minded prosecutors who swept into office in the wake of the Ferguson uprising and criminal justice protests of 2014.

And yet, while the November 17 event at Harris Stowe was billed as a discussion around “transforming criminal justice,” the discussion was decidedly focused on the latest round of criticism directed at Gardner. Khatib Waheed, the office’s director of community engagement, described the event's goals in his introductory remarks as a response to the “highly misinformed issues that continue to be perpetuated by the media, the police union and other very high-level adversaries.” 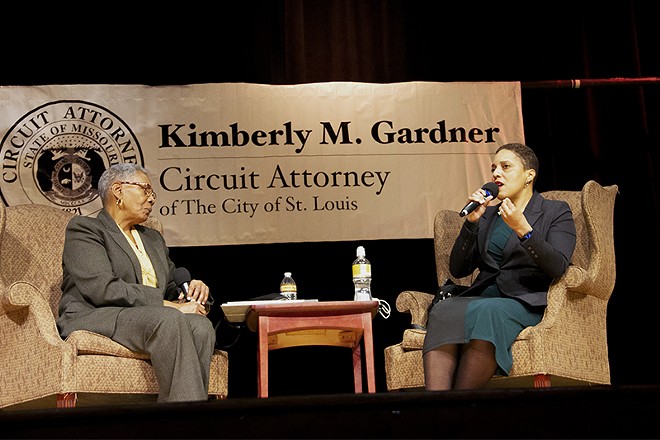 If there were adversaries in the crowd, they stayed silent. Yet, while Gardner faced an audience of about 100 supporters, the event was an example of the fundamental tension in the tenure of the city’s first Black circuit attorney: She is, simultaneously, extremely popular and consistently blamed for the office’s struggles to close cases and retain staff.

But Gardner remained unbowed, maintaining that the outside critics are nitpicking issues amid a bigger picture they refuse to see.

“The prosecutor's office has always been a ‘black box’ of the criminal justice system,” Gardner noted amid her first remarks of the night. “When you have these individuals criticize me and try to compare me to my predecessors, my predecessors were never the first African American prosecutor ever elected in his office since 1821. Let that sit there.”

Gardner spent much of the night contrasting the challenges to her leadership with those of her predecessors. She rattled off examples: There's the public war waged by Republican officials over her prosecution of Mark and Patricia McCloskey; the clashes with St. Louis police union over her “exclusion list” of officers she deems too untrustworthy to testify; her role in the prosecution and downfall of former governor Missouri Governor Eric Grietens; and the efforts by Missouri’s legislature to give the state’s Attorney General “concurrent jurisdiction” over St. Louis cases, to name just a few.

“My predecessors did not have to deal with the most egregious, aggressive police union in this country,” Gardner continued, referencing the St. Louis Police Officers Association. To be fair, the union also clashed with the previous circuit attorney, Jennifer Joyce, issuing a vote of "no confidence," before she left office, but the rhetoric has hit new levels during Gardner's tenure. The group’s business manager and spokesman, Jeff Roorda, has called Gardner a "menace to society" and said she should be removed by "force or by choice."

While Gardner’s clashes with Roorda and the union have made national headlines, the most consistent line of criticism has come in a steady drumbeat of news investigations into her office’s staffing: The first round came in June 2017, just six months into her first term, when the St. Louis Post-Dispatch revealed that at least eighteen attorneys had either resigned or been fired.

Then, in a September 2018 cover story, the Riverfront Times chronicled a howl of complaints directed at Gardner’s office from attorneys, prosecutors and public defenders, all who described various levels of dysfunction between Gardner’s hand-picked managers and existing attorneys.

One year later, the Post-Dispatch followed up with its own deep-dive, reporting that more than 65 attorneys had either quit or been fired since Gardner took office — a turnover rate of more than 100 percent and representing a loss of more than 470 years of combined prosecutorial experience.

In response, Gardner has repeatedly defended her office and insisted the losses were part of the expected transition and that exiting staffers would be replaced. But in 2021, that has not been the case: This September, the Post-Dispatch reported that her office was down to fewer than 30 prosecutors and “desperately understaffed.”

Still, there has been some recent movement to restaff the office: Gardner recently added five new employees, including a chief trial assistant in the form of Marvin Teer, who had previously served as an assistant attorney general and traffic court judge in St. Louis.

During Gardner's November 17 event at Harris Stowe, Teer and about a dozen circuit attorney staff members were prominently seated in the first two rows near the stage. It was a show of support — but also something of a tangible retort to the recent reporting of a staff exodus.

In her remarks that night, Gardner insisted that the Circuit Attorney’s Office “has never been filled to capacity,” and argued that it is normal for younger lawyers to “cut their teeth” prosecuting cases before leaving for higher paid jobs. She also argued that raising starting salaries, from $40,000 to $50,000, had helped “keep some people, but it’s not enough.”

Gardner stayed consistent throughout the night, framing criticism of her office as either unfair or misaligned with the reality of working inside a justice system — particularly a system that is buckling under multiple sources of pressure, from the pandemic shutdowns to corrupt police to the persistent lack of trust that keeps crime victims and witnesses from coming forward.

Despite the years of bad press, Gardner’s position is essentially unchanged since her winning 2017 campaign that made her circuit attorney: expanding diversion programs, reducing mass incarceration and repairing faith in the criminal justice system.

“I have a lot of people who tell me I should just slow down, you know, I shouldn't push as hard,” Gardner told her audience near the end of the event. “I want to push harder, you know; I want to fight harder, because I know it’s bigger than just me, it’s bigger than the time we’re in right now. What’s bigger is the future.”

From his seat in the middle of the auditorium, Terrion Watson listened to Gardner with awe.

“She’s fighting for what's right,” he explained from his seat, moments after returning from the stage with his signed $100 bill. He said he had spent eight of the past nine years in state prison, and that his friends still behind bars had encouraged him to go see the city’s prosecutor.

Watson wasn’t worried about Gardner’s staffing issues or the latest news report on her office’s dysfunction. He had listened to her call out corrupt cops and acknowledge that the legal system often put innocent people in prison — and to him, her words had hit like a revelation.

That's why he had to approach the stage after her speech. Asked why he wanted her to sign the $100 bill, Watson answered simply: “Because she’s 100 percent real.”