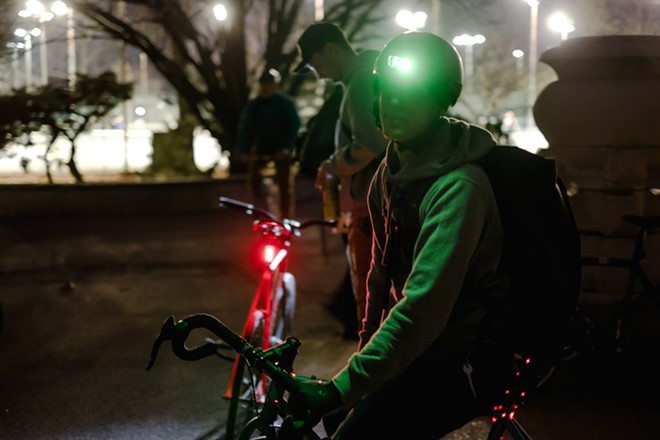 An hour after sunset on a recent Friday night, the BICI bicycle club was ready to roll.

With that, they departed Tower Grove Park and embarked on a freewheeling, circuitous, and, for some, boozy ride through South City. All of it in the dark. 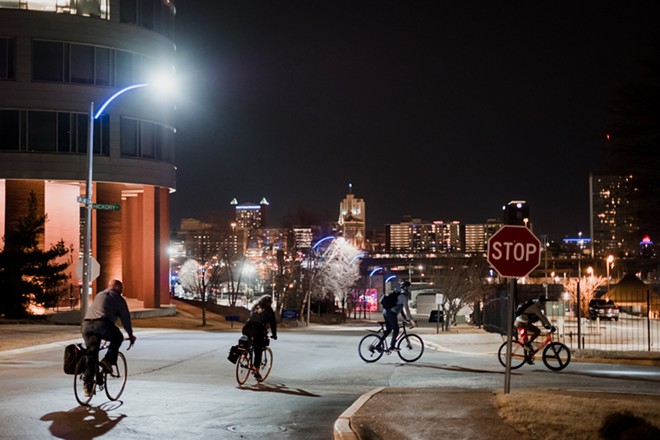 Phuong Bui
Bici cruising through the purlieus of Midtown at night.

On its Instagram page, BICI calls itself, "A casual cycling club for social deviants." It was founded by Hitsman with her partner Jeff Riggs in March, 2020, when other cycling groups were going on COVID-19 hiatus.

"We were on lockdown. We didn't have anything to do," says one of the original riders, Brandi Roach. "It started with just a few people."


For two years, BICI has ridden almost every Friday night, along with supplemental morning and afternoon rides. "We don't want to have any pattern, any defining structure," says Hitsman with a laugh. "That way no one is held responsible."

During rides, the group sometimes disembarks and gets up to antics like climbing atop skywalks connecting buildings or throwing pumpkins off bridges. (The latter has become a post-Halloween tradition.) 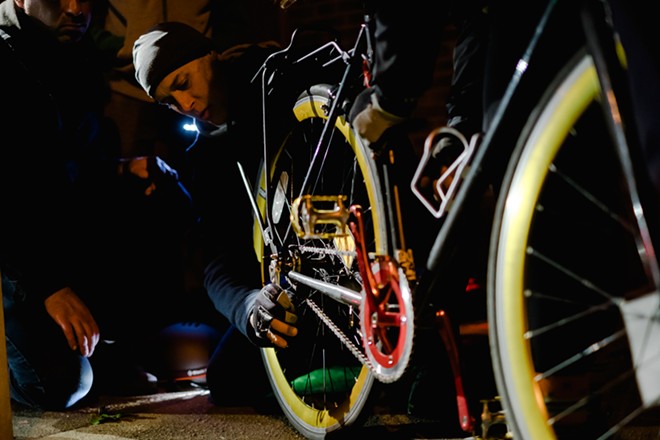 
"We end up down by the river having bonfires at one in the morning and drinking beers under the bridge as the freight train zooms by," says Bryce Rawers, who moved to St. Louis in early 2020 and encountered BICI on Cherokee Street not long after. "It gives you a sense of the city you wouldn't have access to [otherwise]."

Many of the routes are planned by Kyle Lewsader, who charts courses to places many other riders didn't even know existed. "I like to get into some shit," Lewsader says.

Rick Merry, a retired florist in his late 60s, joined BICI after a friend noted she'd hung out with a bunch of weirdos under a bridge."I was like, 'Why didn't you let me know about this?'" 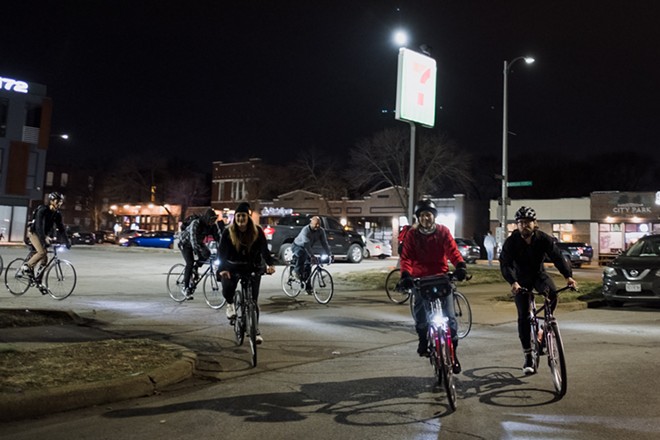 It's a welcoming, diverse group, that has come to feel like family to some. This became especially important when co-founder Riggs passed away unexpectedly last May, at age 38. The rides continued, to honor his spirit.

"Jeff was a tagger under the name SKUM," Hitsman says. "Now when we ride around, it's a little game we play, trying to spot the remaining SKUM tags."

"Jeff knew every spot in this city," says rider Sean Chladek. "We'll go to a place and it'll be new to me but there's SKUM tags everywhere." 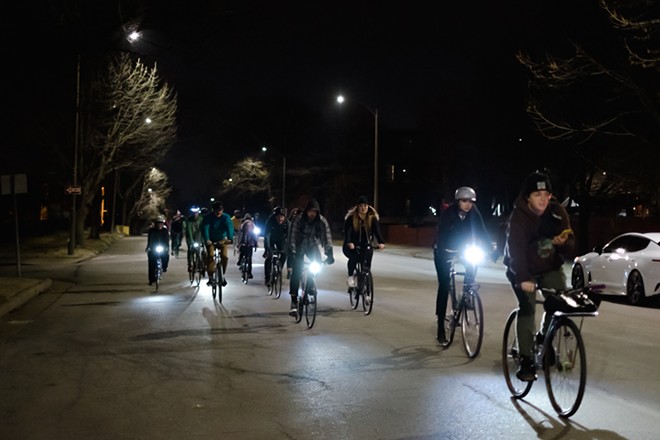 After about three hours of pedaling on the recent Friday night, the BICI crew arrived to Utopia Studios, in an industrial area behind SLU Hospital. Locking their bikes to a fence, they headed inside to the bar and lounge area. A DJ set up in an adjacent room. And then, what had been a bike ride segued gracefully into a late-night dance party.