In Defense of 'Boring' Bars 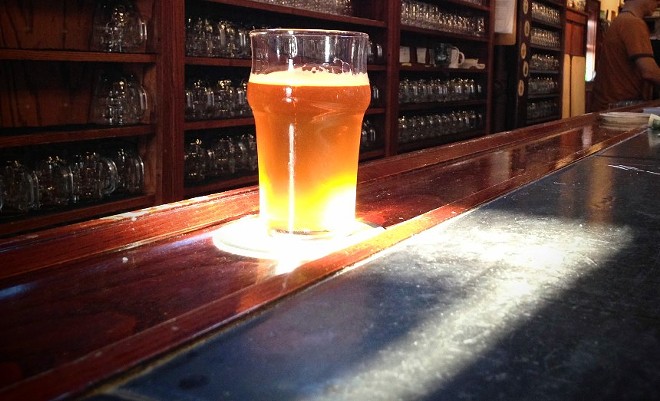 DOYLE MURPHY
Bars and the people who populate them are the real entertainment.

A good bar is like a small town. Depending on the place, the owner or bartender is the mayor, ruling with the input of a wisened — or at least opinionated — council of regulars. The townspeople come and go during the course of business. As barstool neighbors in these mini municipalities, some become great friends. Others find ways to tolerate one another as life continues on. You have your village idiots. Tourists slide through if it's that kind of place.

In this year's RFT Bar Guide, we have write-ups of dozens of places to suit your interests, whether that's pinball or erotica. But there's nothing wrong with the no-frills bar, either. Hang around enough and you'll see everything. Marriage proposals. Weddings. Wakes. I've toasted strangers' job promotions and bought beers for people who seemed like they could use a few. I've watched skilled barkeeps work a room better than any politician I've ever covered — and with about 1,000 times the sincerity and empathy. Fights break out. Couples meet. Couples break up. And, always, the gossip flows.

I guess what I'm saying is that the ever-evolving life of a good bar has always been enough for me. Clear me a spot at the elbow in CBGB off of South Grand after work before the band starts, and I'll happily disappear into the mix of off-shift restaurant workers, neighborhood regulars and newcomers who tend to enter a bit sheepishly after trying the wrong door on their way in. I don't need a TV or video games. Some nights, a few games of pool or darts sounds fun.

Maybe that kind of place sounds boring, but it's heaven to me.

A few years ago, we took on the, let's say "ambitious," task of chronicling the city's dive bars for an edition of the annual Bar Guide. My assignment involved splitting south city's many examples of the form with another writer. I'm not sure I have recovered yet, but I also loved popping into those little ecosystems, those small towns, for a night or two. I met regulars, drank cheap pints (or cans!) of beer and rail gin and watched as the local officials conducted business. Off the clock, I often found myself at Civil Life, Tick Tock or maybe the Silverleaf, but I settled on Ryder's Tavern for my local. The place had no gimmicks. It was pleasingly dark with no televisions, and the eponymous Ryder was a sharp observer of the world with a correspondingly gloomy outlook that fit the times. Ryder's closed early in the pandemic. A couple of partners in the business, the Wamser brothers, have since reopened the bar as a brighter, more food-focused place called the Drawing Board, where you can use chalk to draw and color while you drink. I'm looking forward to trying the place out. Maybe I'll doodle something with the chalk, or maybe I'll just sit and look around. I can assure you it won't be boring.