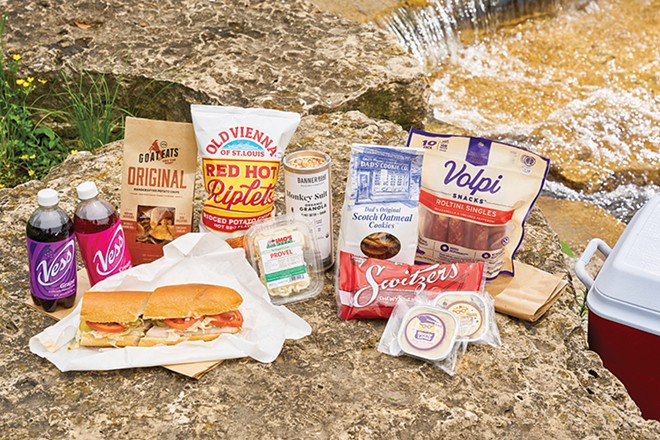 If you find yourself on the banks of the Huzzah donning a pair of frayed jorts (homemade, obviously) and hunched over the back end of a canoe trying to push off from the gravely landing, you've already reached peak St. Louis summer. However, as any seasoned sailor of the low seas knows, this quintessential experience can be made or broken based on the refreshments. The key is balance. Canned booze is perhaps the most essential element of any culinary journey down the river, but it has to be rotated with something more hydrating. Chips are a must but so are sweets, and they can't be the day's only source of fuel. That makes protein crucial, but it can't be too heavy and has to be handheld.

However, the art of cooler packing is more than just assembling the essential elements. It's a window into priorities and, thanks to the plethora of St. Louis noshes, can be a portrait of civic pride. Stock yours with theses local vittles, and you will win the day — so long as you don't tip.

Originally created as a side dish for the former Billy Goat Restaurant & Bar, these golden fried beauties were such a runaway hit that the owners decided to sell the restaurant and make chips full time. Thin, impossibly crunchy, earthy and seasoned with a magical dust that is mostly savory with just a hint of sweet to round it out, Billy Goat chips are the sort of snack you can munch on all day — washed down with a koozie-clad Busch Light, of course.

A true St. Louis sweet treat, Gooey Louie's individual gooey-butter cakes give you the satisfaction of finishing off an entire foil pan while still maintaining your dignity. The original flavor is a solid choice for repping your civic pride, but if you really want to be next level, grab the Redbird Velvet version, a velvety riff on red-velvet cake that pays homage to the home team. Wrapped in water-resistant cellophane, they'll stay dry even as the ice begins to melt in the Igloo.

If St. Louis had a flavor, it would be the fiery, barbecue-seasoned magic dust that coats Old Vienna's Red Hot Riplets. Over the last couple of decades, these addictive chips have captured the hearts of our fair city, not just as a snack in and of themselves, but as a flavor- and texture-enhancing sandwich garnish. Crush up a handful and sprinkle them over your hoagie of choice for ease of eating on the river.

The more sophisticated river traveler might long for a picnic-style cheese-and-charcuterie plate, but such a production lacks practicality. Fortunately, Volpi's roltini provides the best of both worlds: creamy mozzarella wrapped with silken prosciutto that will satisfy the cravings of even the most discerning of float-trip gourmands and the ease of one-handed noshing so often required when the current gets moving.

While most of the drinking that occurs on a float centers on cheap canned beer, a booze-free option is essential for both non-drinkers and imbibers who want to remain upright the following day. This is where Vess grape soda comes in. Effervescent, sweet, a little tart and refreshing on a hot day, this St. Louis beverage is an essential element of a well-stocked cooler and can also be used as a mixer for those plastic airline bottles of Smirnoff you just had to get when you stopped for ice at the gas station in Bourbon.

Whether you refer to them by their actual moniker or call them by their disturbing nickname "Provel Worms," Imo's rope Provel is peak St. Louis snacking. Sure, you're supposed to sprinkle them over a salad or a pizza — or melt them over garlic bread. But if you haven't munched on these salty, cheese-adjacent squiggles straight out of the container, can you really call yourself a St. Louisan?

There is little that capturers the old-timey spirit of St. Louis like a Dad's scotch-oatmeal cookie. A staple of the city's sweets scene since the 1920s, the little bakery on Louisiana Avenue is a time capsule that harkens back to the days of the soda fountains and five-and-dimes that made up the south side. You taste this nostalgia when you bite into one of these crunchy oatmeal delights; it's like bringing a bit of the city with you on your float.

Another storied sweet treat, Switzer's Candy Company has been around so long it counts steamboat captains and fur traders as some of its first customers. Best known for its licorice, Switzer's cherry twists variety of the chewy candy travels well, gives you the right amount of sugary energy and provides a better way to keep your mouth occupied than yelling at your canoe mate for continually steering you into the riverbank.

Since transitioning from the professional kitchen to the granola business in 2015, acclaimed pastry chef Anne Croy has been dazzling St. Louis and beyond with her outstanding granola. Made with oats, various seeds, quinoa, pecans, dried cherries and coconut chips, Banner Road's original granola is perhaps the healthiest way to fuel yourself for a day of paddling, and has the added bonus of capturing the feel of connecting with nature in a similar way that being out on the river does.

Friendships have been lost due to arguments over which St. Louis sandwich shop reigns supreme, but when it comes to the quintessential float-trip sub, there is no comparison to the Mom's Special from the Lindenwood Park mainstay Mom's Deli (4412 Jamieson Avenue, 314-644-1198). Thinly sliced roast beef, ham and turkey — the sub-sandwich-meat trifecta — are tucked into a crusty Italian loaf and layered with slices of Provel-esque Munchee Cheese, shredded lettuce, sliced white onions and tomatoes, dill pickles, and the divine nectar that is Mom's homemade Thousand Island dressing. A few of these beauties give you all the sustenance you and your boatmates need for a full-day journey; just make sure to bring a plastic bag to wrap them in so they don't get waterlogged in the cooler.