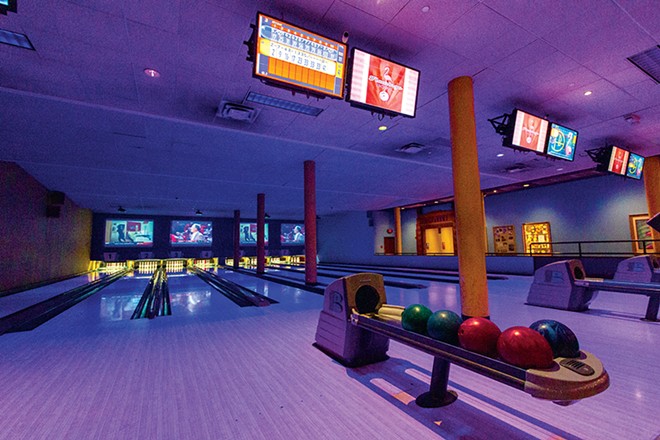 RYAN GINES
Flamingo Bowl lets you roll (and drink) in style.
Whether you're looking for lasers or score-it-by-hand nostalgia, bowling alleys in all their forms remain great places to drink. In the RFT 2021 Bar Guide, you'll find plenty of options for your brand of boozy bowling.

Dripping with history from corner to corner, Maplewood's Saratoga Lanes makes its case for being one of the city's best bowling-alley bars because it sits inside the best bowling alley. Since 1916, this second-floor spot has provided a space to knock down some pins, as well as a few cold ones. The vintage vibe — the bowling alley was midcentury modern before it became en vogue again — is such a refreshing reminder of the way the game used to be played, sans cosmic lights and disco balls. It's no wonder then that this feeling carries over to the bar, which has such good people watching, you don't need to bowl a game to have a full night of entertainment.—Cheryl Baehr

One of the pioneers of the city's craft cocktail scene, Pin-Up Bowl has not just pushed our idea of what a bowling-alley bar can be — it's pushed our notion of cocktail culture in general. Sure, you can hop on a lane and bowl a few frames in Pin-Up's cool, vintage setting, but the real draw here is the bar and its selection of signature cocktails that will impress even the most discerning imbiber. This is a far cry from the warm draft Bud Light in a plastic pitcher that is standard at most bowling establishments; even the beer selection is an impressive array of craft labels that keeps up with any bottle shop or tasting room around. That such an outstanding drinking establishment happens to have a bowling alley attached is only a bonus. —Cheryl Baehr

When someone asks you if you want to go to a bowling alley for drinks and a steak dinner, the natural reaction is to balk. Are they kidding? Can this actually be a passable dining experience or something that would make a truck-stop steak buffet look like haute cuisine? That incredulity gives way to pure joy the moment you step inside Tubby's Pub 'n Grub, a bona fide family steakhouse located inside St. Charles' Plaza Lanes Bowling Center. Tubby's is an institution, and, aside from its surprisingly good steaks, the bar is its biggest draw, serving as the undisputed Cheers of the surrounding area. This is the sort of bar where you will likely see children running around, just as likely to be corrected by the bartenders as the parents because of how often they frequent the place. If bowling alleys were country clubs, this would be it. —Cheryl Baehr

The swanky Flamingo Bowl is the only bowling alley fit for Washington Avenue's trendy nightlife reputation. The sister establishment to fashionable Pin-Up Bowl in the Delmar Loop, Flamingo Bowl takes the notion of the bowling-alley bar, adds in a dash of vintage style and craft cocktail culture, then shakes it up and pours it into a gold-rimmed coupe. The art deco aesthetic, outfitted in red and gold, calls for heels rather than bowling shoes, and if you choose to dress the part, you won't feel out of place. After all, this is maybe the one bowling alley where jeans and a T-shirt will get you a look more than a suit and tie. —Cheryl Baehr

If you close your eyes and conjure up an image of a bowling-alley bar, chances are it looks a lot like Olivette Lanes. This classic lounge stands as a living homage to the quintessence of bowling-alley culture. Vintage photos of bygone winning bowling teams that have graced its lanes — even one that held the world record for the highest-scoring game for decades — plus trophies and assorted bowling memorabilia decorate the no-frills space that is layered with history. This is not the bar to go to for a craft cocktail. Backlight signs with neon-colored, handwritten drink specials like Sex on the Beach are the closest thing you'll get to a drink menu. But what Olivette Lanes lacks in trendy cocktail culture, it makes up for with longtime professional bartenders who make every guest feel like a regular. —Cheryl Baehr