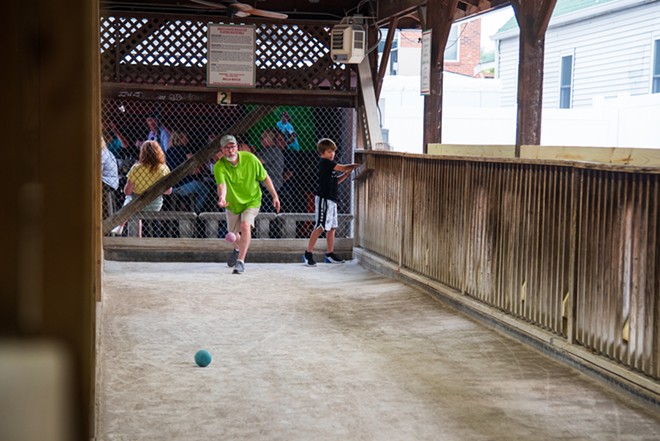 ERIN MCAFEE
Play some bocce at Milo's Tavern, or just sit back and watch the neighborhood experts take the court.
Are you a plastered pinball wizard? Blotto bocce enthusiast? Crocked chess master? The RFT 2021 Bar Guide has ideas for your drinking game of choice.

The Silver Ballroom was built with the pinball-obsessed in mind. The owners, Steve and Shelly Dachroeden, are pinball-obsessed themselves, so they know what kind of experience a serious pinhead is looking for in a bar. The space here is split in half; the bar side is for drinking and flirting and talking about music, and the game side is strictly for playing pinball and has a rotating selection of games. Sure, some patrons dabble in both, but most of the people who walk into the Silver Ballroom are there to do one or the other and to go all out. This spot isn't just a bar to play pinball — it's a bar to win pinball. It regularly hosts tournaments and other events for other gamers. —Jaime Lees

If you want to hit up a bar that has an activity for everybody, Friendly's Sports Bar & Grill is the closest version we have to a Dave & Buster's in the city. Drinking there is like being inside one giant video game. They have pool tables, video golf, darts, shooting games, boxing games, claw machines and more. You and your crew could spend all night hopping from game to game and never get bored. Another big plus of Friendly's is that the drinks are super cheap (and the pours are crazy heavy), so you'll have more money to pump into the machines. —Jaime Lees

Up-Down has more than 60 beers on tap, and all of the cocktails reference retro pop culture. While the names aren't at all inventive (Captain America, Daria, Family Matters, to name a few), all the ones we tried were excellent. (Karate Kid straight up tastes like candy.) The real draw, of course, is the incredible selection of rare and retro game cabinets from the '80s and '90s sprinkled throughout the place. Each only costs 25 cents, and they have everything from Donkey Kong to Captain Commando to that sweet, oversized X-Men cabinet where six people can play at once. You can even grab a slice of pizza like a Ninja Turtle. The clientele can trend toward pretty bro-centric, and on a humid night, it smells like a locker room, but it's all easy to ignore when you're zoned out fighting Scorpion in Mortal Kombat or shuttling fares in Crazy Taxi. —Jack Probst

4 Hands Brewing Co. is a St. Louis staple at this point. Selling points include its selection of beers that you can see being made to great food from Peacemaker and Sidney Street Cafe. While that's all well and good, the real draw for those that aren't as interested in suds is on the second-floor tasting room. The vast space houses two Skee-Ball machines and a row of free-to-play classic arcade games, so you don't have to worry about bringing quarters. The gem of the collection is an original cabinet for the game Tapper. You play as a bartender that must sling beers to customers without dropping any off the bar. While it was later adjusted to be about root beer, this rare machine has actual Budweiser logos in-game and a place to set your beer while you play. It'll keep retro video game nerds busy all night. —Jack Probst

True dive bars are hard to come by these days but CBGB on South Grand is one of the last authentic dives in town. It's dark, it's dingy and it's everything that a dive bar should be, really. The drinks are super cheap and the bar is often full of regulars. One of the best ways to hear some great stories is to kick it with them and see what tales they tell. But bar gossip isn't the only activity here — you can also play pinball, play a video game or take a crack at the long shuffleboard table. Sometimes there are bands crammed into the front window-cum-stage, too. The shows are usually free and the sound quality is suspect, but this is a dive bar. Let your hair down. Lower your expectations. Live a little. —Jaime Lees

If you want to try to blend in with the locals and do some excellent daytime drinking, Milo's Tavern is the place to hit up for some afternoon merriment. Located in St. Louis' famed Italian neighborhood the Hill, this tight-knit community has more to offer than just jaw-droppingly delicious food and adorable family owned shops. It's also a place to kick back and relax. If you want to chill out Italian style, swing by Milo's and play some bocce. With several bocce courts built into their patio area, Milo's is the bocce headquarters in St. Louis. Learn to play on your own or wait around for a bit and you'll usually be able to become a spectator. Old-timers meet there frequently for a casual game and are usually happy to show off their skills for an adoring audience. —Jaime Lees

Walking into Pieces Board Game Bar and Cafe, the first things to catch your eye are shelves and shelves of what looks like books. Walk a little closer and find your favorite board game waiting there to be played as you drink with your friends. There are more than 800 games available for play. The offerings range from classics, such as Monopoly and the Game of Life, to obscure — could anyone tell us what Qwirkle is without looking it up? If board games aren't your thing, plenty of card games are available. There are also drinks for whatever your heart desires. Cocktails, coffee mixes and beer or wine can help bring out your competitive side; just don't flip over the Monopoly board when someone buys out Park Place and Boardwalk. As of this writing, the bar is still operating at reduced capacity and games are sanitized after guests return them to the "Game Sanitization Station." —Jenna Jones

Friendly competition dominates the scene at Westport Social. Foosball, floor shuffleboard, washers, darts and basketball hoops are all available for you to impress (or embarrass yourself) on a date or with friends. Ping-pong tables are part of the setup as well, but keep it classy when you get to drinking and don't try to use them for an impromptu game of beer pong. The drink list is extensive, and the karaoke room awaits your high notes after you get a couple in you. Summer Nights from Grease is one of the most-requested songs, according to the bar, so find your Sandy, Rizzo or Danny and have at it. If you've worked up an appetite at the mic or from playing too hard, Westport Social also has some small plates — sliders, pizzas, nachos and more. —Jenna Jones

This Dogtown favorite would be a fine stand-alone pub, but two not-so-secret weapons put it way over the top. First, it's home to Nomad sandwich shop and its pastrami, which RFT food critic Cheryl Baehr describes as "the best pastrami in town — if not the state, or even the entire planet." So there's that. But wander through the bar and out the back door and you'll spot the second surprise: an enormous patio. The outdoor space has evolved from a perfectly fine slab for downing pints to a handsome oasis with its own stylish bar, shaded by wooden overhangs, like a cabana without the kitsch. At the far border of the patio, Tamm has turned an old garage bay in a separate block building into a game room with vintage arcade games. Options include tabletop Atari Pong, a Silver Strike Deluxe coin pusher, skeeball and, of course, Big Buck Hunter. Another bonus: The back patio is dog friendly, meaning you and your best friend can hang out all evening. —Doyle Murphy

Take a crack at pinball at the Gramophone or grab a sandwich — either way works at this bar. Self-described "sandwich kingz," Gramophone advertises itself as a sandwich pub where they "focus all of our energy on creating great sandwiches and bringing people great craft beer and good times." The drink menu and sandwich lineup are equally stacked, so bring your appetite and buy in for a round or two of pinball. Music is a constant feature in the bar, whether it's a DJ or someone with a guitar on the stage. Beer flows, music plays, you drink. It's a recipe for a good time. —Jenna Jones