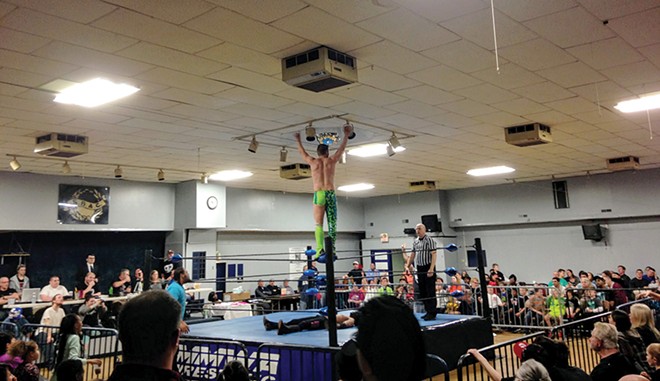 A night out can be the same old thing — or an opportunity to enjoy the kind of excitement that only comes from a live performance. Here's our RFT 2021 Bar Guide picks to take in a show with your drink.

The Grove's undisputed drag capital is Rehab, where their elite "Divas of the Grove" reign supreme with shows every Monday, Wednesday and Saturday on the spacious patio. "We are the party bar!" announces show director Chasity Valentino. "The divas are a high-energy show and now the longest-running show in the Grove. People used to refer to us as the back-porch drag of St. Louis. We all know some of the funnest parties we've been to took place on the back porch!" she laughs. "So we took that title and ran with it!" There's room for everyone at Rehab, and based on the way they pack 'em in, everyone seems to love it. —Chris Andoe

The Crack Fox is where St. Louis goes when it wants to get weird. This is not your destination to watch the night's Cardinals game on TV — you can go anywhere for that — but a dive bar for dance parties and drag shows, burlesque productions and half-naked performance art. Moodily lit and thrumming with electronic, punk and industrial music, the downtown institution three blocks south of Washington Avenue has long been a haven for the subculturally inclined. As the bar's website suggests, it's a place for people looking for "something a little different." And there's a lot more to do than drink its popular pouch-served "Adult Hi-C" rum cocktail: The venue has a monthly burlesque show every first Saturday, a monthly drag show called BimboVision and weekly karaoke on Tuesday and Friday nights. It's a sign the world is truly healing: You never know exactly what you'll see on the Crack Fox stage — but be assured, it will be more than just a little different. —Danny Wicentowski

For such an esteemed local institution, it's amazing how much change Off Broadway is constantly undergoing. Over the past few years its patio area has blossomed into one of the great outdoor relaxation hangs in town, and the venue area has somehow continued to quietly expand in size and scope. But the feel of the room is still classically rock n roll: a place where punks and cowboys and rockers and troubadours and local legends of all ages gather to watch great music unfurl in front of them. The sound in the room is top notch, the staff is always the best, and if you love music, it's where all your best friends are likely to be hoisting a City Wide or a WellBeing together to celebrate a record's release date. Off Broadway made it through the pandemic by the skin of its teeth and is forging ahead with a smart vaccine requirement plan to protect both patrons and staff, so you can hang out with a little more security and comfort. There are a lot more changes planned — even more patio space, an expanded side bar and a larger stage — so enjoy it now, but don't get too used to it, because as usual, there's more to come. —Evan Sult

Some bars are just for drinking. But most of the people who drop into the Heavy Anchor end up enjoying some other activity along with their drinks. In addition to darts and shuffleboard, the Heavy Anchor offers plenty of other entertainment. The entire back of the bar is a venue that hosts comedy shows and other events just as frequently as it hosts bands. The spot has been the home of many local comedy acts, variety shows, trivia nights and movie nights. The movie nights have taken on a new role, though, as the Heavy Anchor has partnered with neighboring business Arkadin Cinema & Bar (5228 Gravois Avenue) to host the guests who visit for the Arkadin's outdoor movie nights out back. These moviegoers can get drinks from the Heavy Anchor and then enjoy a safe outdoor film in the Arkadin lot. It's the new (better) version of dinner and a movie. —Jaime Lees

A couple of fun facts about Ninth Street Deli: It's on 13th Street, and members of a band that often plays there, the 9th Street Surfers, actually live on 12th. Rather than us explaining those quirks, ask the friendly bartenders for the story. If you're chatting with Jamie, the manager who lives upstairs, also ask about the ghost who turns on the light for her cat when she forgets. A favorite haunt of "Maven of Mardi Gras" Luann Denten, the socialite explains what she loves about the place: "Great food, fun drink options and the Cheers ambience! When the band is playing, the crowd is singing along, dancing, everyone's totally engaged. The bartenders know your name, know your beverage of choice and are quick to ensure that you have one. A Soulard treasure!" —Chris Andoe

The old brick hall on the edge of Soulard is truly one of the city's gems. It doesn't matter if you're dropping in to hear a band, partake in a fish fry or witness the majesty of local-level pro wrestling, a night at South Broadway Athletic Club is one you'll remember. It's an actual club, founded in 1899 with an early focus on boxing and wrestling, and has somewhat surprisingly managed to hang on (there were some close calls) to host a slate of events that varies but remains heavy on grappling and rock music. You can join SBAC, but it's not a requirement as the members graciously open it to the public on a regular basis. The setup is a good-sized main hall with a bar partitioned off at the back, where you'll order a domestic under the soft glow of stained-glass Busch beer lights. And if you just stayed back there, it would be a worthwhile night. But chances are good you came for the wrestling, and if that's the case, you're going to want to see what happens next. —Doyle Murphy