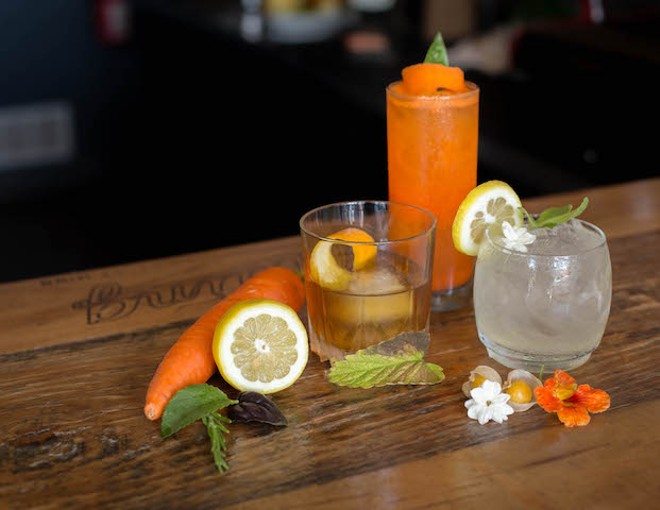 PHOTO BY MONICA MILEUR
The cocktails at Treehouse are pretty enough to eat.

These hotspots want you to eat your greens — and they provide a great place to drink them, too

Drinking is usually a pretty good vegetarian/vegan option, but the cocktail offerings at Tree House (3177 South Grand Boulevard, 314-696-2100) are an added delight. The lineup at the Tower Grove South vegetarian and vegan favorite includes smart twists on classics, such as the "Tree House Almond Milk Punch" — a light and tasty version of a traditional milk punch — and the "Rhubarb Rickey," a refreshing update to the summer gin cocktail. Despite those offerings, Tree House is definitely a restaurant first. Most of space is devoted to table service, as is the outdoor patio, but the bar is a perfectly comfortable place to sip a cocktail. Made of reclaimed wood, it extends the clean, casual feel of the rest of the eatery. A chalkboard-style wall provides your drinking options, which include a full wine list and a rotation of craft beers. The place is lively but well-mannered. And from your seat at the bar, you'll still have a good vantage point for people-watching through the floor-to-ceiling windows at the front of the restaurant.

The Garden on Grand

To sit on a solid barstool — not some rickety thing with napkins stuffed beneath a short leg — is an unexpected pleasure in any establishment, but the mindful and naturalistic look of the Garden on Grand (2245 South Grand Avenue, 314-898-3788) goes beyond its furniture. Simply put, the bar is a beauty. Cut from a single tree, the gleaming surface provides solid elbow-space and plentiful room for your wine glasses and cocktails. The drinks menu, which has been recently updated, bares the hallmarks of owner Cevin Lee's goal of building a temple of naturalism on this otherwise humdrum stretch of Grand. The "Pomegranate Gin Fizz," which combines Pomegranate San Pellegrino, gin and confectionary sugar, goes down as a sweet pleasure with ample kick, and the rest of the solid cocktail menu takes a similar approach to that most delightful of nature's gifts — a nice buzz at a pretty bar. 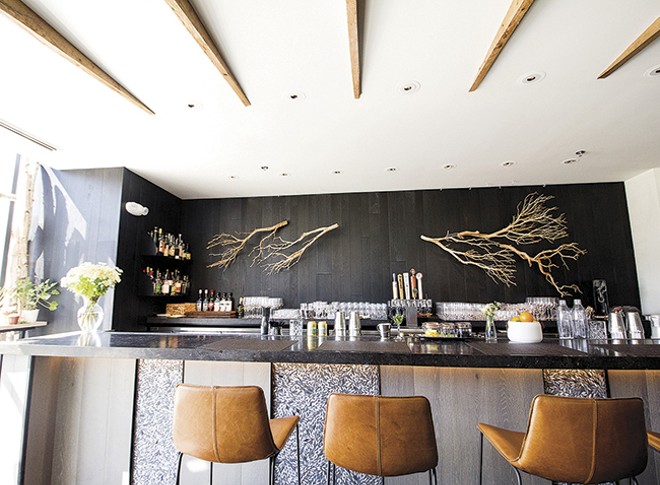 PHOTO BY MABEL SUEN
The bar at Vicia.

At Vicia (4260 Forest Park Avenue, 314-553-9239) — the Cortex newcomer where the gorgeous space is eclipsed only by the almost-too-pretty-to-eat-yet-totally-scrumptious dishes — stylish cocktails still find room to shine. This celebrated restaurant has an unwavering commitment to the details, to freshness, to being in the moment, and that dedication extends beyond the food offerings into every drink created. Though the ever-evolving cocktail list isn't extensive, it showcases libations that are elegant and intriguing, yet approachable enough to please a wide range of tastes. Also on the menu are non-alcoholic tonics for those who are wanting something far, far beyond your basic virgin beverage.

When the heat is on, turn to these delightful bars for a blast of icy refreshment

When you walk into Narwhal's Crafted Urban Ice (3906 Laclede Avenue, 314-696-8388), your attention is immediately drawn to the bar's nautical motif. From the walls decorated with old sea anchors to an ocean blue color palate, Narwhal's is much more elegant than any slushie bar needs to be. Indeed, co-owners Brad Merten and Brandon Holzhueter could have aimed low and grabbed the college crowd, but the business partners (who date their friendship back to their days at Parkway West Middle School) are more ambitious than that — and smart enough to excel in the execution. Behind the bar sit twelve slushie machines that boast surprisingly complex drinks, from the "Apple Mint Julep" — a concoction of Kentucky bourbon, Angry Orchard hard apple ale and a bit of mint syrup — to the "Hurricane Tony," which contains various rums, pineapple and blueberry syrup. The bar also offers a variety of bottled cocktails, selected spirits and a wide variety of domestic and imported brand beers. Since opening less than a year ago, the bar has become a destination in the Midtown area, both for SLU students and a host of city dwellers smart enough to realize that slushies this delicious aren't just for sorority sisters. 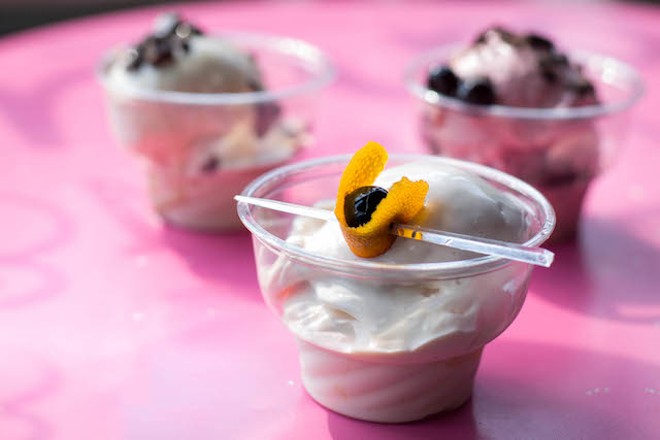 You can get a white Russian anywhere, but you'll have to go to Ices Plain & Fancy (2256 South 39th Street, 314-601-3604) for a "Frozen Dude." The combination of vanilla ice cream, Kahlúa and vodka is part of the innovative ice cream parlor's lineup of "boozy ices." Embedded in the Shaw neighborhood about two blocks north of Tower Grove Park, Ices typically offers nearly a dozen ice cream cocktails within its darling confines. These are not alcoholic slushies or frozen blender drinks but actual, liquor-infused ice cream. Ices makes them — and plenty of non-alcoholic flavors — by flash-churning its ice cream with the help of liquid nitrogen and torches. It gives the pink-trimmed shop a touch of the feel of a science lab, in the best way. There are four tables inside and another eight out front, where you can spoon up your cocktail while relaxing under an umbrella. This is not the kind of place where you belly up to the bar for round after round; closing time is 10 p.m. weeknights, 11 p.m. on Fridays and Saturdays. But if you want take the edge off your babysitting duties with a "Mrs. Marshall's Old Fashioned," it's hard to imagine a better place.

The Fountain on Locust

We'll let you in on a little secret: Long before the city's nouveau ice cream shops started offering boozy flavors and ice cream-based cocktails, the Fountain on Locust (3037 Locust Street, 314-535-7800) was on the scene, blending ice cream with alcohol for a cool dose of yum. The city's O.G. ice cream parlor offers a voluminous menu of ice cream martinis, which go down smooth but also carry quite a kick. You don't need to love chocolate to love this list: A good number of these martinis use sherbet as their base, including our favorite, the "Raspberry Lemondrop," with its fresh crushed berries, raspberry sorbet, lemon sherbet and healthy dose of vodka. A roster of well-executed retro cocktails, from the rusty nail to the sazerac, also feel just right in these high-spirited, Art Deco environs. 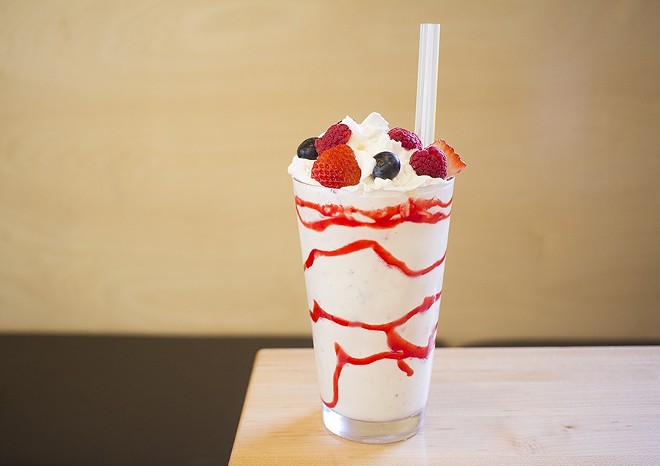 PHOTO BY MABEL SUEN
Boozy shakes are among the highlights at Hi-Pointe Drive-In.

If you think the line stretching halfway out to McCausland Avenue at Hi-Pointe Drive-In (1033 McCausland Avenue, 314-349-2720) is for the burgers, well, you are partially right. In just a few short months, the tiny restaurant made from upcycled shipping containers has solidified its position as one of the city's top spots for burgers and fries. However, if you're one of the forward-thinking folks who've been able to resist making your burger a triple in order to save room for a boozy shake, you will be rewarded handsomely. Though admittedly not a bar, Hi-Pointe Drive-In is a must-stop for anyone who likes to mix a little sweet with their sauce. For a mere three bucks, you can add a shot of liquor to one of the restaurant's thick and creamy milkshakes. Butterscotch with rum? Dreamsicle with vodka? Mix and match however you like and bask in the joy of feeling like a kid and being a grown-up all at the same time. Owner Mike Johnson (who made his name at Sugarfire Smoke House) may not have envisioned the spot as a bar, but these frosty libations might make you forget you were supposed to order a burger first.

You don't have to be a boozehound to love Clementine's Naughty & Nice Creamery (1637 South 18th Street and 730 De Mun Avenue, Clayton; 314-858-6100), but come on: Anyone can do ice cream. It takes a genius to offer a spectacular version that's also spiked with top-notch beer, wine or liquor. Founder Tamara Keefe's patented boozy ice creams include alcohol-rich riffs on the manhattan, the old fashioned and even a boozy banana rum. Beer drinkers will thrill to the "Summer Shandy." The one we can't get enough of, though, is the insanely rich maple bourbon, a glass of Rebel Yell swirled with maple syrup, sea salt, vanilla and salted candied pecans that somehow comes in scoop form without losing any of its punch. Yes, you could happily go the "nice" route at either of Keefe's always popping parlors, but why be a good girl when naughty is this much fun?

Turn the page for our favorite chill hangouts — and some great South of the Border-inspired spots, too

Arts Can Have Big Economic Impact, Study Hopes to Show

A Food Lover's Guide to St. Louis City and the Metro East