Forget everything you've heard about our recent annus horribilis. Here's why life is not so bad after all 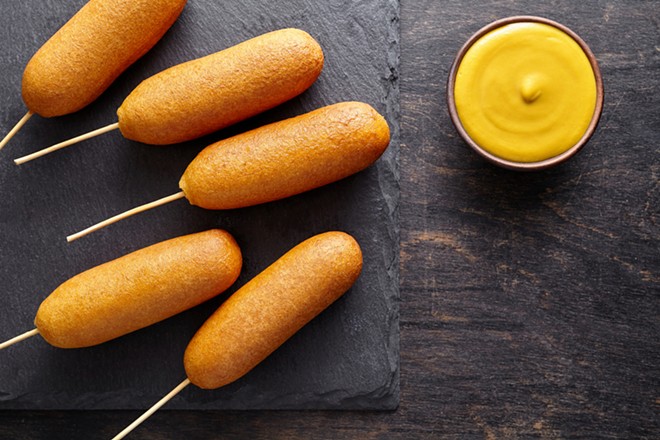 SHUTTERSTOCK/GreenArt
American innovation at its finest.

8. Because more foods than ever are shaped like America's esophagus

A year piled high with dead celebrities and the dashed hopes of Democrats cannot deflect from the fact that 2016 was a magnificent year for meat-foods shaped like my esophagus.

This isn't some kind of puerile dick joke. I am utterly serious: I am a time-conscious millennial whose many social and professional engagements require meal solutions which can be eaten anywhere, whether I'm tweeting in the boardroom or snapping pajama selfies while also tweeting in the boardroom. It's not an easy balance, and you learn a thing or two living this jet set-life — and the most important lesson is that a throat is a terrible thing to waste on foodstuffs not already processed into tubes which can slide down your throat with the satisfying convenience of feedings batteries into a TV remote.

And so I look at 2017 not with mounting existential horror but with the satisfaction of a man fed well with meat torpedoes. This year alone Taco Bell has brought back Rolled Chicken Tacos, Burger King has busted out a brown-tinged hot dog and, as a bonus, a rolled-up version of its famous burger, the Whopperrito. (Be still my meat-choked heart.)

The trend of tubular meats began several years ago, as a niche offering in perhaps a handful of gas stations. From such humble beginnings, the cuisine has blossomed into a glistening field of protein cylinders, an array of tortilla-wrapped delectables which turn alongside sausages and bratwursts on roller grills across the country. In 2016, their calm, sizzling rotation composed the soundtrack of American life.

Some still whine about how America used to make things, man. But these naysayers miss the point — America still makes things, just not the kind of stuff you'd find in a factory 40 years ago. In our new age, America is all about making things easier. Easier to understand, easier to compress, easier to flatten into two-dimensional concepts that can be rolled into missile-shaped simplicity.

In 2016, we became a country of post-things: post-fact, post-work and, in its best version by far, post-chew foods that require knife and fork usage. We are a nation of Popsicles and corn dogs, not industry. This is the national progression of the future, and we, the multitudes who happily tilt our heads to swallow the nutritional equivalent of a fatty sawdust, are the inheritors of this modern kingdom.

Inside my local QuikTrip, the roller grills are stocked with taquitos, brats and sausages that strain against their blistered casings — here is the future. Egg roll? Classic hot dog? Steak and cheese wrap? Screw decisions; just stuff them all in a bag. I devour every last one in my car, and lo I am become my own taquito, a container of many meaty multitudes. I wash it down with a Diet Dr. Pepper, and in this moment 2016 doesn't seem so bad after all. &#10;— Danny Wicentowski

9. Because the Loop Trolley has yet to actually kill anyone

"Clang clang clang," went the trolley, "ding ding ding," went the bell. "Oh fuck, shit," went the bicyclist, lurching forward as his tires unexpectedly locked into the tracks embedded into Delmar Boulevard. "Ow ow ow," he muttered after landing, surveying the bloody damage to his face and hands. It is a scene that has played out repeatedly since construction began on the Delmar Loop Trolley — except forget about the clangs and the rings. The trolley isn't even running yet, and already those ill-advised tracks have sent multiple two-wheeled vehicle enthusiasts to the hospital.

But there is a bright side: Nobody has died yet! That may seem like a low bar, but consider that the same cannot be said of Seattle's First Hill Streetcar. In May, 27-year-old Desiree McCloud was biking along when her tires locked into the tracks, sending the Seattle resident flying face-first into the pavement just before 10 a.m. Though McCloud was wearing a helmet, it did not save her life. Now that's something to get upset about. A broken arm? By next year, we may look back on 2016 as the good old days. —Daniel Hill

10. Because Francis Slay is finally free to return to his natural habitat

Mayor Francis Slay is one of the St. Louis region's most fascinating creatures. Scientific name Mayorus Laidbackus, this specimen is known to spend its formative years in poli sci programs and law schools before moving onto seemingly never-ending leadership roles in second-tier U.S. cities.

But now, after an unprecedented four terms in public office spanning sixteen years, the creature known as Slay is entering the part of his life cycle when he must undertake the long journey up the Mississippi River to the gravel beds of his birth. The migration is treacherous, and as Slay swims, using geomagnetic and chemical cues to sniff out the shores where he was spawned, he will sometimes leap as high as twelve feet in the air to bypass waterfalls and other obstacles. This will leave the mayor susceptible to predators such as bears and eagles — many of his kind wind up serving as lunch rather than reaching their destination. But with more than a little luck, Slay will make his way to the spawning grounds, where he will deposit his eggs in the gravel and spawn future Slays, destined for mayorships of their own.

And then Slay, who hasn't been "off" in public since Bill Clinton was in the White House, gets to relax the way the rest of us do. He can swear in public, fart in an elevator and wander around Mardi Gras with a beer bong in hand and a song in his heart.

Speaking of songs, the old prog rocker can finally get the band back together and resume gigging. As for the city he's guided for almost two decades, maybe it will start skewing a little more progressive as well. Stranger things have happened. — Daniel Hill

11. Because we've entered the void, and nothing matters

Here we are at the ass-end of 2016, our faith in democracy shaken and all of us worried about what the future holds. It is vital that we remember how we got here, both to assess blame (there's plenty to go around) and to build a historical record for the young to learn from. If we don't do it now, we'll have to do it from inside the Trump-branded re-education camps when Steve Bannon is elected president in 2020. Here is what we know to be true.

Nate Silver got his dick kicked in the dirt. The man with all the charts and graphs and the ability to interpret and explain their data points was predicting a Hillary Clinton victory up until the very end, like a geekier Muhammad Saeed al-Sahhaf. Silver's synthesis of data was the security blanket for many deluded NPR listeners. "He's correctly predicted every election since the Pepsi Challenge!" they'd crow when you expressed misgivings about Trump's momentum. "Nate Silver is never wrong." But he was wrong, just like al-Sahhaf, and Silver hasn't been seen since the day after the revolution (also like al-Sahhaf). Now we're free forever from prognosticators and oracles, and can just lay in the fetal position in our unlit rooms until President Bannon announces it's time to turn on the ovens.

Donald Trump is now the ultimate Washington insider, which means he hates himself? Hillary Clinton remains a free citizen (well, as free as anyone who hasn't kissed Trump's wee little pinkie ring can be); Trump has stocked his cabinet with Goldman Sachs executives; and he seems to be softening his rhetoric when it comes to immigration and global warming. The ultimate outsider has become a lying insider so quickly that even his hard-line supporters regret what they've done, and you can laugh at their fury on trumpgrets.tumblr.com. Think about it: Trump rose to power on crazy nocturnal tweets and feculent nonsense, and even he's powerless in the face of Washington's chthonic powers. It doesn't matter how many thin-skinned shitbag narcissists you vote for, nobody will ever beat the Washington machine. It was built by the worst elements of society, and it's powered exclusively by dirty money and broken promises — and renegade outsider cowboy billionaire Donald J. Trump has already bowed down before it. How unhappy is he with this turn of events?

The Russians are coming. The CIA has gone public with its belief that Russian hackers manipulated the election process in order to swing a Trump victory. Do you realize what this means? The CIA, which is at the root of most great conspiracy theories, has its own conspiracy theory. We are through the looking glass, people. Nothing is true, and anything — anything — is possible. Is Trump a Kremlin stooge? Was Ken Bone a Russian sleeper agent planted to sow confusion? Was the X-Files revival a tip-off? How many of our electoral college representatives were involved in Project MKUltra and are still trippin' balls on government LSD? We went through the longest and worst election cycle in history and all we learned from it is that America is about 48 percent racist — and about 38 percent of America already knew that. — Paul Friswold

12. Because a Missouri McDonald's is serving unlimited french fries

McDonald's franchisee Chris Habiger shocked an unsuspecting world in April by announcing that his store in St. Joseph, Missouri, would be offering unlimited french fries. The chaos generated by the national press convinced Habiger to scale back his plans, and when the location opened in August the concept was said to be a temporary promotion, likely only to last a month or two. Yet here we are at the end of the year, and an employee tells us the fries are still flowing. Habiger, a prescient man, probably saw the writing on the wall: 2016 is the year that Americans made clear they want that which is viscerally satisfying but devoid of substance, golden in color but poison within. Stuff fistfuls of french fries in your mouth and sinuses, and fear not for terrible toll being inflicted upon your body's vital systems. How much damage could they possibly do? &#8;— Daniel Hill

13. Because the dead remain dead

Despite everything that has happened this year, every beloved relative and celebrity who died has remained dead. This may not seem like much to celebrate, but it's potentially huge. Despite all the jokes about the Cubs' championship and Trump's ascension to America's Tweeter-in-Chief being sure signs of the impending apocalypse, that has not proven true. The faithful departed have yet to claw their way out of their graves, ascending to heaven (if they're good Christians) or staying on earth for more suffering and tribulations (if they're sinners like us).

And even if you don't believe that faith-based stuff, the dead rising from the grave is a sure sign of the zombie apocalypse, which is generally bad for everybody regardless of faith (except for perhaps American survivalists; the jury remains out on this one). This one fact — the dead remain safely dead — is the only thing getting some of us to sleep at night. And here in the short, dark days of winter, we'll take what we can get. — Paul Friswold