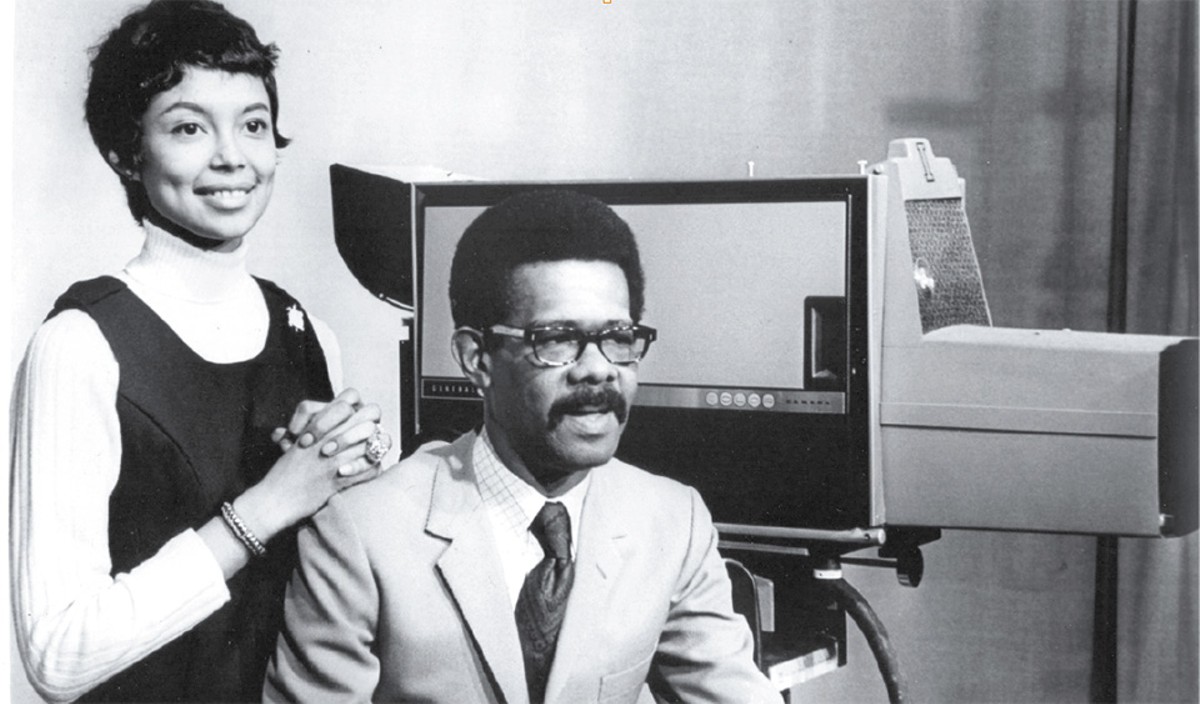 Loretta Long and Ellis Haizlip on the set of Soul!, the first weekly TV show devoted to African-American culture and ideas.

Every year when it comes time to navigate through the maze of St. Louis International Film Festival offerings, I invariably start by turning to its music documentaries. More than just the cinematic equivalent of comfort food, recent films about popular music fall somewhere between cultural archaeology and human interest, telling stories of the bands you've never heard of (but should), the one-hit wonders who faded away and the no-hit wonders who never fit in. Most of these films aren't about superstars, and with good reason. While the biggest names in music have no problem getting their stories told in one medium or another, a smaller wave of films have given voice to the lesser known people: the session men, the backup singers, the engineers and producers and the others who got away.

All of the four films below screen as part of the festival. Visit cinemastlouis.org for more information.

Boom
7:30 p.m. Friday, Nov. 2, at the Stage at KDHX
Boom is a particularly warm-spirited example of Top-40-excavation work, a generous history of a band who escaped obscurity — just barely — and are happy to tell the tale. The Sonics were a product of the early-'60s Northwest party-rock boom that gave us Paul Revere and the Raiders and a half-dozen versions of "Louie Louie." The band's secret weapon was that its members played REALLY LOUD, and their unique sound gave them two chart-toppers — "The Witch" in '64 and "Psycho" in '65 — but only on charts in Washington and Oregon. After a brush with rock & roll fame (including a disastrous gig packing up the Shangri-Las), the members went their own ways, unaware that their persistent producers would spend the next few decades spreading the word and creating a sizable fan base in Europe, where they were seen as the proto-punk precursors to the raw sounds of the Stooges or MC5. Interviewing the members 50 years after their first success, filmmaker Jordan Albertsen describes his own discovery of their music and strikes the right balance of historical perspective and personal investment. The musicians, mostly elated by their late-life revival, are unpretentious and generous. They can discuss the sense of failure and the emotion that comes from being in a band that isn't working — really, it's not unlike dealing with family problems — but enough time has passed to let them see their story with humor.

Parallel Love: The Story of a Band Called Luxury
7:30 p.m. Friday, Nov. 9, at the Stage at KDHX
I had never heard of Luxury, the subject of Parallel Love: The Story of a Band Called Luxury, but its story turns out to be as unpredictable and driven as its music. With a harsh sound that recalls both post-punk bands like the Smiths and the sweet vocals of Rufus Wainwright, the musicians in Luxury got together at a Christian college in Georgia and, despite their anguished sexuality and raw lyrics, were set to become superstars in the modest world of Christian rock. Then fate intervened in the form of a serious automobile accident. Though the band members still record together today, more than twenty years later, the accident seems to have transformed them. There's an interesting balance in Matt Hinton's film, a dual story about musicians who appear to have recorded nearly every minute of their careers while becoming increasingly introspective in their personal lives.

Bathtubs Over Broadway
7:30 p.m. Friday, Nov. 2 at .ZACK
Heard any good songs about silicone lately? Steve Young was a comedy writer for The Late Show on a routine assignment — finding strange and obscure records that David Letterman could mock on television — when he made a musical discovery that changed his life: industrial musicals. Young soon immersed himself into the largely uncelebrated world of not-quite-ready-for-Broadway shows that were subsequently performed at trade shows and conventions, occasionally commemorated with privately pressed cast albums and then forgotten.

For about half of Bathtubs Over Broadway, Young guides the viewer through a few of his discoveries, trading rarities with other collectors (including Jello Biafra of the Dead Kennedys) with a kind of Midwestern gee-shucks naivete that recalls his former employer (Letterman is also one of the film's producers). By the time he uncovers a rare film of 1969 plumbing-themed romance The Bathrooms Are Coming! and manages to meet one of its performers, you begin to see that this odd hobby has transformed his life.

When his work is up-ended by Letterman's decision to retire, Young forms a new network of friends as he tracks down the performers (including Martin Short and Chita Rivera) and the composers responsible for the likes of You Belong in a Dodge and Diesel Dazzle. Director Dava Whisenant combines the obscurity of the subject with the enthusiasm of the host to create a wonderful blend of personal discovery, history and genre recreation. It all comes together in an inspired ending, a Broadway fantasy brought to life.

Mr. Soul!
7:30 p.m. Friday, Nov. 9, at Washington University's Brown Hall
Although it contains brief musical performances by Stevie Wonder, Ashford and Simpson, Earth, Wind & Fire and many other significant R & B acts, Mr. Soul! is about much more than a handful of memorable hits. From 1968 until 1973 (when President Nixon did his best to tone down public broadcasting), producer and host Ellis Haizlip took advantage of the still-growing National Educational Television network (now PBS) to introduce Soul!, the first weekly program devoted to African-American culture and ideas. Yes, music was a big part of it, but only one patch in a cultural quilt that included the Last Poets, the Alvin Ailey Dancers, poet Nikki Giovanni, James Baldwin, activists, politicians and almost anyone speaking out for their community.

As directed by Melissa Haizlip and Sam Pollard, Mr. Soul! is a guided tour through the archives that explores the show's place in the debates of the time. Using historical footage to follow the thread from '73 to the present, it's also a reminder of how the media can reflect and influence the world around it — and yet so often fails to do so. At a time when "Peak TV" seems to refer to whatever recycled comic book characters and Scandinavian torture-porn your cable network has decided to push this month, programming like Soul! seems like an underground experiment, a lost cause that official histories of mass media would rather ignore.

Jump to comments
« A Star Is Born Is More Indulgent Than Inventive   |   Orson Welles' Lost Film, The Other Side of the Wind, Is as Great as He Promised »