4 Ways to Explore the Outdoors in and Around St. Louis 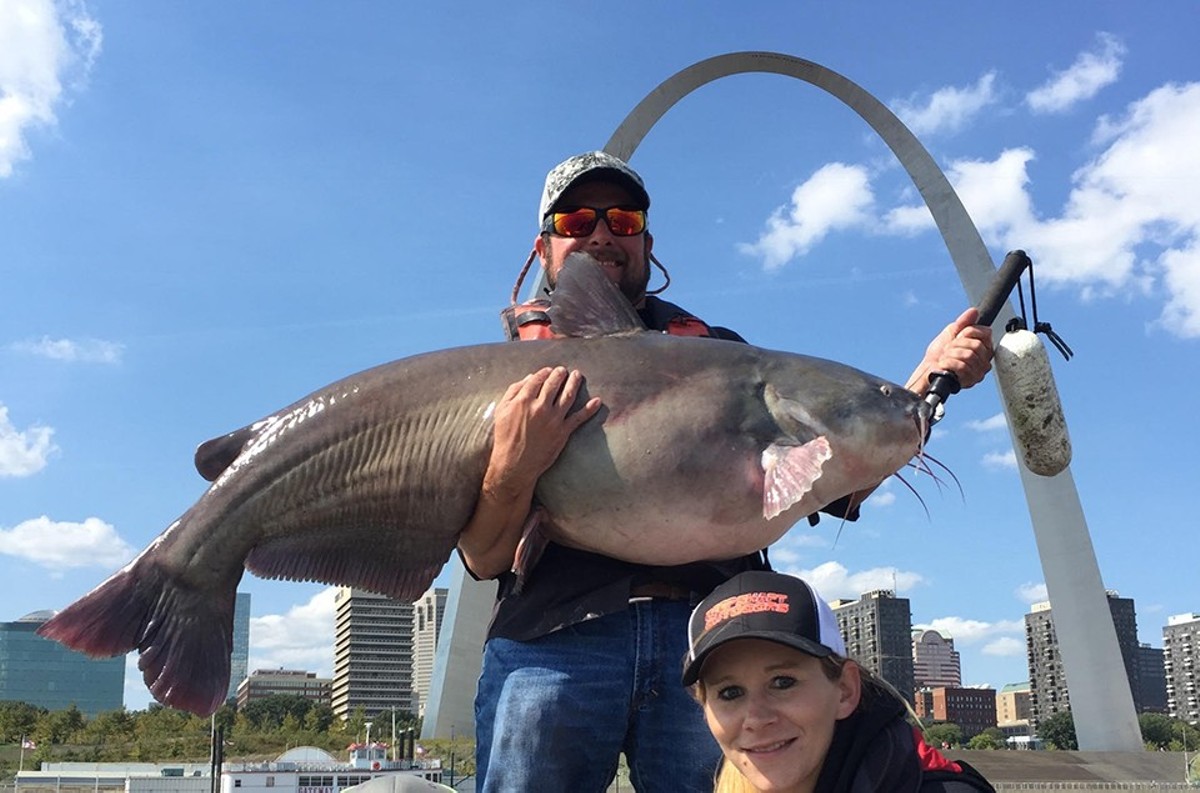 The Mississippi is home to some monster catfish. COURTESY OF JASON SCHNEIDERHAHN

South of the Poplar Street Bridge, just beyond the graffiti-covered flood wall, you'll find the entrance to one of the city's best-kept secrets: world-class catfish fishing.

the Mississippi River. "They can Uber, if not walk, there," he says.

Within minutes, they're out on the water, casting for the monster blue catfish that lurk in the murky brown water. Average blues in the area weigh fifteen to twenty pounds, Schneiderhahn says, and clients might pull in twenty or more fish on a good day. And there is also the opportunity to hook into one of the 60 or 70 pounders that circle beneath the shadow of the Arch in warm weather.

"It's so exciting," he says. "They're actual game fish, and they're huge."

Schneiderhahn, whose business is online at stlcatfishing.com, grew up in Oakville and has been fishing his entire life. But it was not until 2005 that he discovered the thrill of angling for big blues in the Mississippi. He rarely ran into other fishing boats back then as he threaded his way around the barges that were rolling down river with tons upon tons of grain.

That's changing. Now, he might see ten or fifteen pickups with boat trailers down at the ramp off South Leonor K. Sullivan Boulevard. He's one of a small, but growing, number of guides on the waterway.

While most might see the river as little more than a shipping route for the heavy barges, Scheiderhahn says that's actually one of the secrets of St. Louis' giant and plentiful catfish. All that loading and unloading of barges at the granaries along the waterfront means some of the product inevitably ends up in the Mississippi, and that's pure fish food.

"It's neat, especially when you get the whole city drop behind you with the Arch and the casinos," he says.

Part of the fun is that it's an unexpected outlet in St. Louis' urban center. The city is not exactly known as a hotspot for outdoors enthusiasts, but the opportunities are here. You just have to know where to look. Hiking, biking, birdwatching and, yes, fishing are all possibilities for the intrepid explorer. Best of all, there's no need to spend hours in the car to reach them. 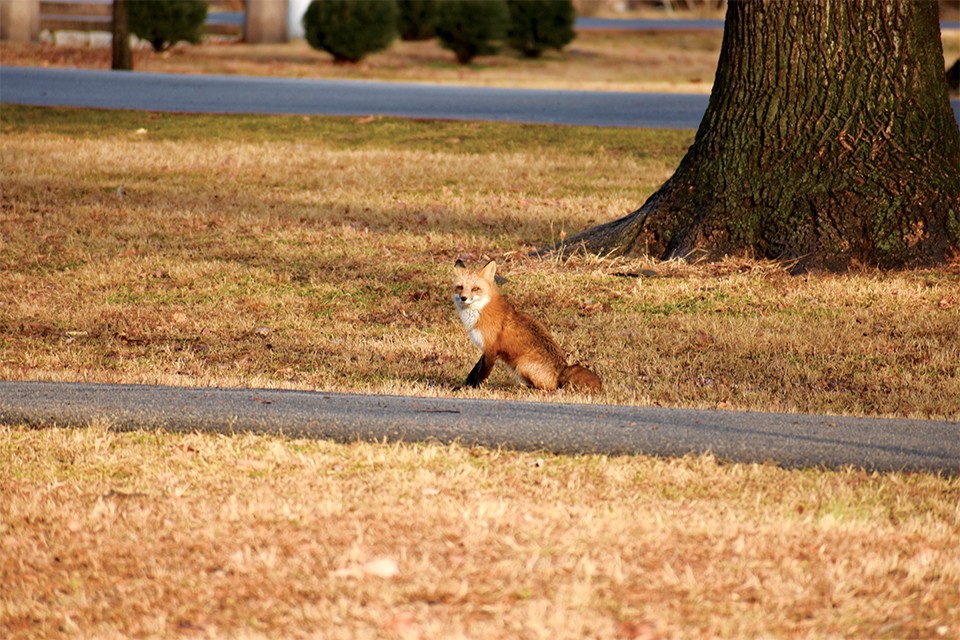 DOYLE MURPHY
This Tower Grove Park fox is among the wildlife you might find in the city.

With all that activity, the park might surprise you with its wildlife. There are the swans and ducks that inhabit the lily pond, raccoons that pop in and out of hollowed-out trees and even a fox that slips along through early, misty mornings.

But the best-kept secret is the Robert & Martha Gaddy Wild Bird Garden at the park's northwest corner. There you'll find the flyway birds that migrate through St. Louis. Keep an eye out for woodpeckers, thrushes and warblers. The spot is small but often empty of humans. Pathways covered in wood chips and dense trees let you step away from city life for a while, even though you're less than a hundred yards from Kingshighway.

DOYLE MURPHY
Signs of animal life abound along the edges of the Mississippi.

The ever-expanding network of paths called the Great Rivers Greenway has been a huge boost to recreational bikers (and runners and walkers) as it spreads across the metro, even crossing the Missouri River.

In the city, one of the best options is the Mississippi Greenway, which runs north from downtown to Chain of Rocks Bridge. There is a parking lot at the east end of Biddle Street, and from there, you can cruise along a section of waterfront typically cut off from view. Cyclists have been known to spot deer, interesting birds and, when in season, some gorgeous wildflowers along the fifteen-mile route as the scenery changes from industrial to natural. Great Rivers has plans to develop more parkland along the way, promising this excursion is only going to get better.

DOYLE MURPHY
Forest Park is one of several places in St. Louis for bird watchers.

The king of St. Louis' parks is not a secret destination, but it can still be a refuge for the nature-starved and time-crunched city dweller. There are two main woodlands: John F. Kennedy Memorial Forest on the southwest corner and the Successional Forest east of the zoo. Kennedy is the larger and older of the two, with more than 60 acres of mature forest and three-plus miles of trails. It is another great St. Louis spot for birding, but its varied habitat, featuring wetlands and an eight-acre savanna, brings out all sorts of wildlife, including two species of frogs who serenade hikers through the spring.

Successional Forest is something different, a forest in progress. Once another manicured lawn in the park's more than 1,300 acres, it has been allowed over the past three decades to return to a natural landscape. It also features wetlands and trails through more than twenty acres.

As long as you are making your way around the park, you might as well hit the east side, where you will find a series of small lakes, streams and a nine-acre prairie. Winding — and sometimes crowded — trails will take you on a pleasant trip around marshes and over storybook-looking footbridges. On the far northeast corner, you will find yet another forest — the West Pine Woodland — and the Forest Park Hatchery, a series of pools that the Missouri Department of Conservation uses for a variety of programs, including fishing workshops.

If you have Huck Finn dreams, maybe you would like to take oar in hand and try out life on the Mississippi — at least for few hours. In 2018, Big Muddy Adventures started running three-hour canoe tours that launch from the cobblestone parking lot at the base of the Arch on Mondays and Wednesdays through the warm months. It is a unique way to see the city, not to mention a solid workout.

"Big Muddy" Mike Clark and his band of guides have been taking people on the Mississippi for years. In the past, they have run moonlight cruises out to river islands, where on certain nights, some of the city's notable — and adventurous — chefs prepare dinner over a campfire. They either paddle back under the stars or camp along the shore.

There are still not a lot of people who canoe the river, which makes it an underused resource for those craving an interesting outdoor adventure in St. Louis. Experienced paddlers are probably fine on their own, but for the rest of us, it's probably best to make those first voyages with somebody who knows the Mississippi's tricks.

If you prefer a tamer body of water, Big Muddy also rents canoes, kayaks, paddleboats and stand-up paddleboards through Boathouse Paddle Co. for use on Post-Dispatch Lake in Forest Park.

How to Have a Superlative St. Louis Summer: Embrace the Heat

How to Have a Superlative St. Louis Summer: Beat the Heat

Tropical Moose in Kirkwood Has Your Go-To Summer Treat

How to Have a Superlative St. Louis Summer: Embrace the Heat