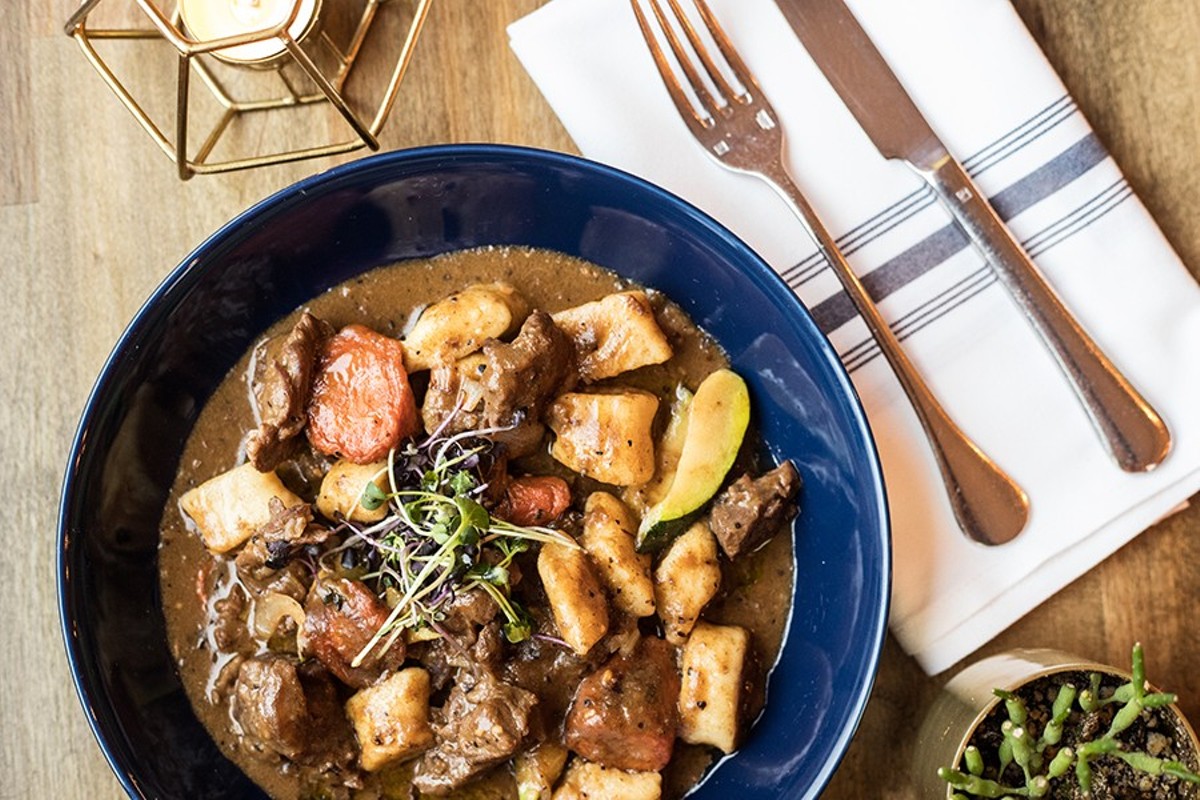 Beef is braised in red wine and served with brown-butter gnocchi, squash, carrots and sage.

My daughter had a crappy day at school — the sort of friend drama you expect in middle school had somehow managed to infest her pre-K classroom. She'd been crying the entire way to dinner. When we finally arrived at 58hundred, the four-month-old restaurant in Southwest Garden, her eyes were red and puffy.

Immediately sensing her sullen mood, our server sprang into action. First came the cranberry juice in an ornate, vintage bar coup, followed by a show-and-tell on the restaurant's whimsical, animal-shaped salt and pepper shakers. By the time the intentionally generous order of fries hit the table, my little one was not only beaming — she was asking when we could come back.

Looking around at the bevy of regulars packing 58hundred's bar and dining room that frigid Friday night, it's clear that the welcoming, personalized service shown to my daughter is not only standard protocol — it's why Marc Del Pietro and Brian Doherty opened the restaurant in the first place. After closing the Central West End outpost of their popular Webster Groves restaurant the Block, the pair were looking to recalibrate. They wanted to recreate the original Block's neighborhood feel, only in a new concept.

They searched all over the city and county, and when they found the building at the corner of Southwest and Dalton, they knew they had found their spot. It was smack-dab in the middle of a tight-knit residential neighborhood that was missing a neighborhood restaurant. 58hundred, they figured, would fill that void. 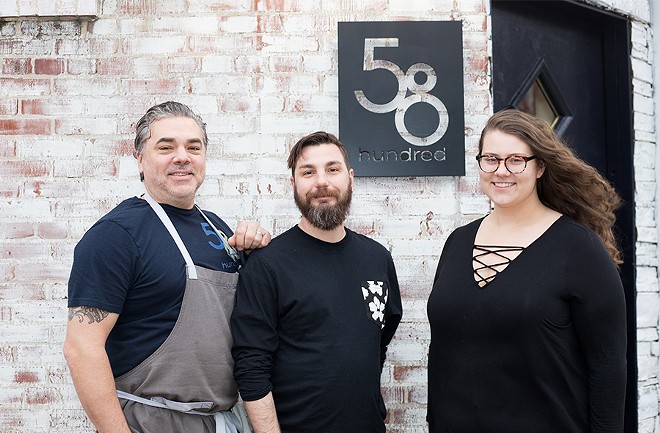 Those instincts were confirmed, Del Pietro says, the moment he and Doherty opened the doors this past October. Within days, 58hundred already had regulars — neighbors greeting neighbors as they strolled into the cozy bar, some rolling up to the restaurant in their golf carts, others bringing the kids for a quick dinner and still others dolled up on date night. Bartenders already knew drink orders and servers had made a note of special requests. It was like Cheers, only with better food and a polished atmosphere.

But you don't need to live in the Southwest Garden neighborhood to appreciate the appeal of this inviting, well-executed restaurant. 58hundred is one of those rare gems that hits that perfect tone between being nice enough for heels, but not so nice you're embarrassed to roll in wearing yoga pants. And the price point certainly finds that sweet spot: Del Pietro and Doherty made a point of keeping things reasonable, and they have succeeded. The most expensive item on the menu, a petit tender, is $19. Most dishes run in the mid-teens range, with sandwich options $10 or under.

The stylish digs, however, make 58hundred appear upscale at first glance. Del Pietro and Doherty did an impressive job converting the former Lou C's Bar & Grill into a gorgeous, light-filled space. The interior is divided into two rooms: The first houses a new white quartz-topped bar and several high-top cocktail tables. A main dining room lies just beyond that, simply appointed with wooden tables and modern, dark blue chairs. Both rooms have been painted white and are filled with gold accents including modern light fixtures and candle holders.

The Block has a butcher theme, but at 58hundred, Del Pietro and Doherty wanted to tone down the meat focus to appeal to a broader audience — namely their wives. Both Amy Del Pietro and Lea Doherty are vegetarians, and they inspired their husbands to create a menu that honored their preferences.

Most of the non-meat options present as appetizers, such as "Nashville's Pimento Cheese Toast," which pairs the piquant cheese spread with thick slices of grilled bread. The char from the grill infuses the rich cheese with bitter depth; the flavor was so impressive I would have liked a thicker slather of it. Alas, I was left with just a tease.

Perhaps I was being saved from overeating so I could fully enjoy the appetizer that followed, the Brussels-sprouts tacos. This standout dish pairs charred vegetables with toasted almonds, giving the tacos a satisfying contrast of textures. Pickled red onions and lime crema electrify the deeply savory sprouts, making each bite a symphony of brightness, bitterness, crunch and softness. It's not simply a quality non-meat option; it's one of the best things the restaurant offers.

The Buffalo-fried-shrimp starter is another example of 58hundred at its best. I expected a simple plate of battered shrimp tossed in hot sauce; instead, I got a masterful rethinking of the bar staple. There was no orange on the plate to speak of; the shrimp is soaked in hot sauce before cooking so it absorbs all of the intense, vinegary heat. The shellfish is then coated in a delicate breading that is heavily flecked with black pepper. Buttermilk ranch and shaved slices of celery garnish the bottom of the dish, offering a cooling contrast to the shrimp's deceptively fiery punch. The preparation combines the satisfaction you get from Buffalo wings with the sophistication of a white-tablecloth restaurant; in other words, it's 58hundred in a dish.

It would not be a Del Pietro-and-Doherty restaurant without a hearty pork appetizer, and the nachos do not disappoint. Crisp tortillas are covered in luscious, jalapeño-infused mornay sauce, then adorned with massive hunks of smoked pork that have just enough sauce to provide flavor, but not so much as to cover up the meat's flavor. It's a crowd pleaser of a dish, but one that is perfectly executed.

58hundred's few misses were minor. Pretzel bites had a mealy texture and lacked flavor, a factor that was mitigated by the delightful accompaniment, a jalapeño white-cheddar dipping sauce. A chopped salad lacked flavor, save for a few sparse pieces of salami, and a side of charred broccoli was so tough it was difficult to chew.

However, these minor flaws were forgotten thanks to a parade of wonderful entrées. Flawlessly grilled salmon, encrusted in black pepper and herbs, picks up a wonderful smokiness from the grill. The fish is placed atop quinoa that is so tender, it almost has the texture of risotto. It's garnished with a simple salad of asparagus, cucumber and celery that give a pop of refreshment to the rich fish.

Half of an Amish chicken was smoked so it picks up an earthy sweetness, then roasted to crisp in its delicate skin. It shows how wonderful chicken can be when given extra care: The flesh is at once sweet, spicy and bitter; its skin so succulent you'd think it was poached. Though the meat is a masterpiece, its supporting elements are equally dazzling, including a mushroom-and-leek bread pudding and creamy orzo that is enlivened with verdant pesto.

It's hard to think of a more perfect entrée for this cold, dreary winter than 58hundred's braised beef. Though the flavors are indeed hearty — beef braised in red wine, Parmesan gnocchi, brown butter, carrots and sage — the dish is surprisingly restrained. This is not a pot-roast gravy bomb; only a touch of the beef's cooking jus pools at the bottom of the plate, mingling with the brown butter to form a rich, nutty nectar that is perfect for dipping the light-as-air pillows of gnocchi. It's an elegant rendering of a quintessential comfort food.

Though 58hundred bills itself as a vegetarian-friendly restaurant, just one off-the-menu entrée was meat-free: a pasta special featuring butternut squash and mushrooms that were tough and woody. Considering that non-meat eaters are all too often relegated to a veggie pasta of some sort, I found not only the dish disappointing, but the overall lack of vegetarian entrées at dinner decidedly off brand.

Other than that special, plant-based eaters can choose from a gourmet grilled cheese or make a meal out of sides or appetizers — again, being relegated to this part of the menu tends to be a consistent complaint from vegetarian diners. Fortunately, the side options here are at least thoughtful and well prepared, such as the excellent hash brown, baked with cheddar cheese and a farm egg, or "Smoke and Vinegar Beets." If these snappy, mouth-puckering beauties do not remind you of the sort of side dish your grandmother would serve at a family gathering, then I am sorry for your childhood.

Really, though, 58hundred is at its best on an offering like the "58 Burger," a juicy smashed burger covered in molten cheese that seeps into every one of the patty's crevices, making it hard to tell where the cheese ends and the fat begins. The only thing better than the burger is a double version, its two patties nestled into the warm brioche bun and oozing their juices down your wrists as you take a bite.

That burger would have put a smile on my face no matter the circumstances, but the fact that it was served by someone who took the time to cheer up my little girl makes 58hundred one of the best dining experiences I've had in recent memory. It's not the food, not the atmosphere, not a cool cocktail list but those sorts of personal touches that make the difference between a fine-enough restaurant and a real neighborhood gathering place. No wonder 58hundred is such a success. It's the total package.

Jump to comments
« At Mike’s Hot Dogs, Cardwell’s Former Chef Dazzles in a Counter-Service Setting   |   Savage, Infused by a Chef’s Immense Talent, Opens Our Eyes to What Food Can Be »