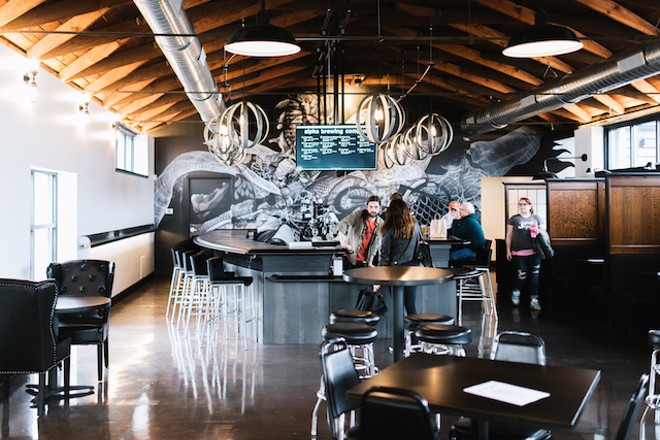 The newly crowned best beer city in the country (thanks, USA Today!) just got even better: Alpha Brewing Company (4310 Fyler Avenue, 314-621-2337) opened its Tower Grove tap room last weekend, three months after closing its Washington Avenue location. The brewery, known for its sours and limited-edition small-batch brews, is back in a much larger, spruced-up space, with a food program run by Plantain Girl Mandy Estrella.

The new 13,000-square-foot location is made up of three distinct areas: the tap room, a private event room, and the production brewery. The space was once occupied by a rake and shovel company that went out of business years ago, and head brewer and owner Derrick Langeneckert has had his eyes on it ever since. “I live in this neighborhood, and I love it here,” he says. “The opportunity to expand from 35 seats to 200, and to do it my neighborhood, was too good to pass up.” The energy and foot traffic from nearby Tower Grove Park have him excited for warmer weather, as does a patio space Alpha plans to unveil in the coming months.


When you enter the brewery, you are greeted by a massive mural from St. Louis artist Jason Spencer (aka Killer Napkins), high ceilings, wooden booths and a center bar with TVs. The space is clean and modern, with the beer as the focal point. This is all by design, as Langeneckert explains: “All the breweries are starting to look the same with the exposed brick and concrete beams. We wanted to be different, and focused on creating a simple, refined space.”

Alpha has had its share of local controversies (most recently, the company faced criticism for what some said was a misogynistic grand opening Facebook invite). But among beer lovers, it’s best-known for its sours like the Delphian, a chardonnay-barrel-aged sour blonde, and the Hop, Lock & Drop It, an American pale ale. The beer menu is constantly changing as the brewery comes up with new and exciting flavors like the Apocrypha, a sour black ale, aged in pinot noir barrels. Aside from the more exotic offerings reserved for the adventurous, Alpha also offers easy drinking blondes, stouts, and IPAs. With passion and attention to detail, Langeneckert, who has his master’s degree in biology, comes across as part mad (beer) scientist and part proud father.

But he also knows his limitations. Langeneckert says, “I know how to run a bar and make beer, so we wanted to partner with a pro when it came to serving food.” That pro is Mandy Estrella, chef and owner of Plantain Girl. She’s been serving her Puerto Rican and Caribbean inspired food all over town for years, but always in a pop-up setting. Now she has a space (and more importantly, a kitchen) to call home. Pro move: order the jibarito, a Puerto Rican-inspired sandwich full of steak and cheesy goodness that uses plaintains instead of buns. 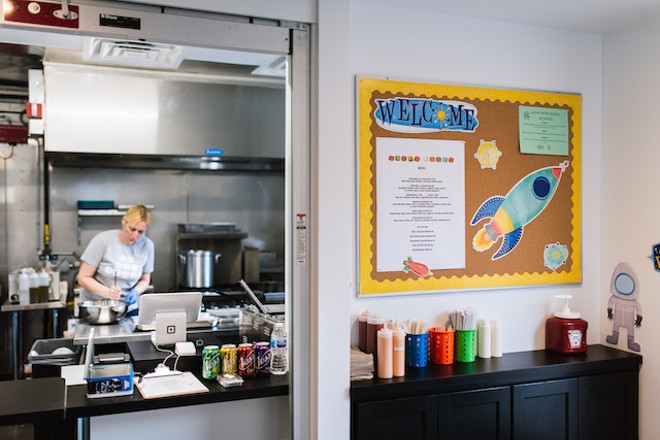 SPENCER PERNIKOFF
Customers can order food at a back window.

Alpha’s five-year anniversary party is slated for April 14. Like last weekend’s grand opening, it will feature live music and a few special brews. Fans of the downtown location will delight in the new space, the addition of the food program, and upcoming biergarten.

Alpha Brewing Co. is open on Friday and Saturday from 3 to 11 p.m. and Sunday from 3 to 8 p.m. Scroll down for more photos.

Ellen Prinzi is our bar and nightlife writer; she likes strong drinks and has strong opinions. You can catch more of her writing via Olio City, a city guide app she started last year.