Tony Evans has already been sitting in a meeting room at Busch Stadium for more than two hours when most of the other youth baseball organizers and coaches leave.

The 25 men and women, who are primarily from low-income communities around St. Louis, took notes as a presenter from Sports Illustrated Play guided them on how to use the digital platform to help with logistics like scheduling games and submitting rosters.

It's a new process and, at the meeting in early March, some of the coaches are skeptical about whether it will actually make organizing leagues easier.

"It's going to be good," Keith Brooks, director of Cardinals Care, assures them.

Evans stays behind because his league in Normandy participates in inter-league games against other communities in St. Louis, which means he has to learn some additional steps. He doesn't end up leaving the stadium until 9 p.m., after three hours.

But he and the other adults, who are either volunteers or local government staffers, appear willing to sit through the meeting because they believe that the Redbird Rookies can help children and teens who otherwise might not be able to afford youth sports.

The Cardinals started Redbird Rookies through its nonprofit, Cardinals Care, in 2004. The program provides funding for uniforms and equipment, such as gloves, bats, balls and pitching machines, and off-field cultural, health and educational programming to teams in the free leagues run by nonprofits or municipalities throughout St. Louis. Many of those leagues play on fields donated by Cardinals Care and a current or former Cardinals player, who then is recognized by having his name bestowed on the field.

But despite the fact that it's free to participate in the Redbird Rookies, fewer kids take advantage of the program than a decade ago. In 2008, there were 4,000 players in the program, according to the organization. Last year there were about 2,500.

Then and now, the majority of the kids who participate are African American.

Despite the fact that MLB and teams like the Cardinals have invested millions of dollars and tried a variety of youth baseball initiatives, it's unclear whether they will be able to bring African Americans back to the game at previous levels.

"It gets harder and harder every year to get the kids out playing baseball," says Evans, who is 56 and has been involved with the game his entire life. "Because of course baseball isn't one of the sexy sports like football or basketball." 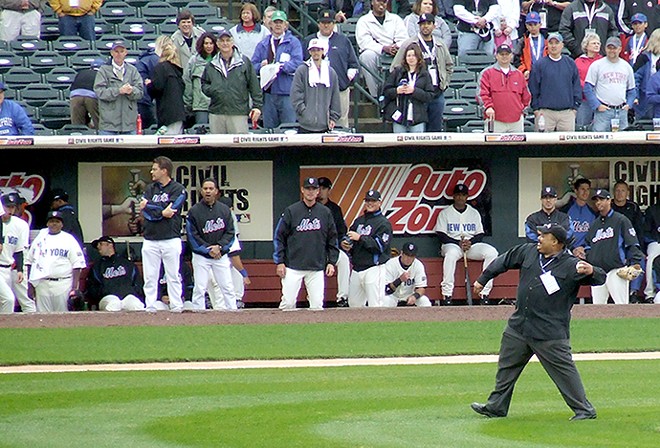 FLICKR/
Martin Luther King III threw out the first pitch for the Civil Rights Game in 2008.

I first became interested in the declining rate of African American baseball players during college, when I interned with the Memphis Redbirds, the Cardinals' Triple-A affiliate. They were the only professional sports team owned and operated by a nonprofit. The Memphis Redbirds Baseball Foundation was dedicated to two initiatives: "Sports Teams Returning in the Public Education System" and "Returning Baseball to the Inner City," better known as RBI.

The nature of minor league baseball is such that it's hard for teams to market any particular player. They do not control their rosters — the MLB teams do — and if a player is really that good, he likely won't be there long. As such, most teams attract fans through food and drink specials and zany promotions like the Mike Tyson Ear Night (courtesy of the Fort Myers Miracle) or the Hairiest Back in Louisville contest, as seen at a 2007 game between the Louisville Bats and the Richmond Braves.

But we were different. Not only was AutoZone Park, a downtown Memphis stadium financed with $72 million in tax-exempt bonds, nicer than most, if not all, minor league ballparks, but fans purchasing tickets knew they were supporting a worthy cause.

In 2007 — the year before I interned — more than 1,200 kids ages five to sixteen participated in RBI, a free summer program that lasted six to eight weeks. It featured baseball, a reading program and mentors helping with life skills like "how to dress for a job interview, how to open a bank account," recalls Dave Chase, who was then president and general manager of the Redbirds.

"Not looking for baseball players but looking for citizens," says Chase. "It was giving kids something to do over the summer instead of hanging out on a street corner."

The Associated Press reported in 2005 that the Redbirds and donors were providing $600,000 annually for the youth programs, and that the team planned to increase that figure to more than $7 million once the team repaid the bonds that financed its stadium.

The team's mission felt particularly compelling in Memphis, a city that, according to the U.S. Census Bureau, in 2007 had a poverty rate of more than 25 percent and one of almost 35 percent among African Americans. James Earl Ray assassinated Martin Luther King Jr. in 1968 in Memphis at the Lorraine Motel, a site now home to the National Civil Rights Museum.

So a year before I arrived, Chase spearheaded an annual exhibition before the start of the regular season known as the Civil Rights Game. In 2008, the New York Mets, led by an African American manager and a Latino general manager, played the Chicago White Sox, led by a Latino manager and an African American general manager. The team also honored actress Ruby Dee and former outfielder Frank Robinson before the game, and Martin Luther King III threw out the first pitch.

With the game and its proximity to the Civil Rights Museum (six blocks), Chase told MLB.com, "It's adversity and opportunity. We have the chance to do something great now. Memphis is a perfect fit."

The Mets toured the museum. Afterwards, closer Billy Wagner told the New York Times, "It made me embarrassed to be white. I can't believe all of that actually happened."

The team's bench coach, Jerry Manuel, talked to the Times about the links between the civil rights movement and baseball and then addressed the downward trend in the number of African American players.

"What we need to figure out is whether this is an exhibition game to appease someone who thought of a great idea or will this springboard us toward having some significant dialogue to find out whether it's significant that the numbers are declining," he says.

Whatever impact the game had, it did not become a fixture in Memphis as Chase had hoped.

In the middle of the 2008 season, the team was close to defaulting on its bond payment for the stadium and brought in a new management team, which meant Chase was out. The promised $7 million contribution never happened. Out of money, the team also canceled the 2008 playoffs for its youth RBI program.

"The decision to not play those final games was a bad decision," John Pontius, treasurer of the Memphis Redbirds Baseball Foundation, told the Memphis Flyer. "It was made in the middle of a very difficult transition from one management team to another. Obviously, if anyone had the ability to make that decision over again, they'd make it differently."

The next year, the Civil Rights Game became an MLB event and bounced around among different cities. The last game was played in 2015. I could not find a single news story about the game's demise.