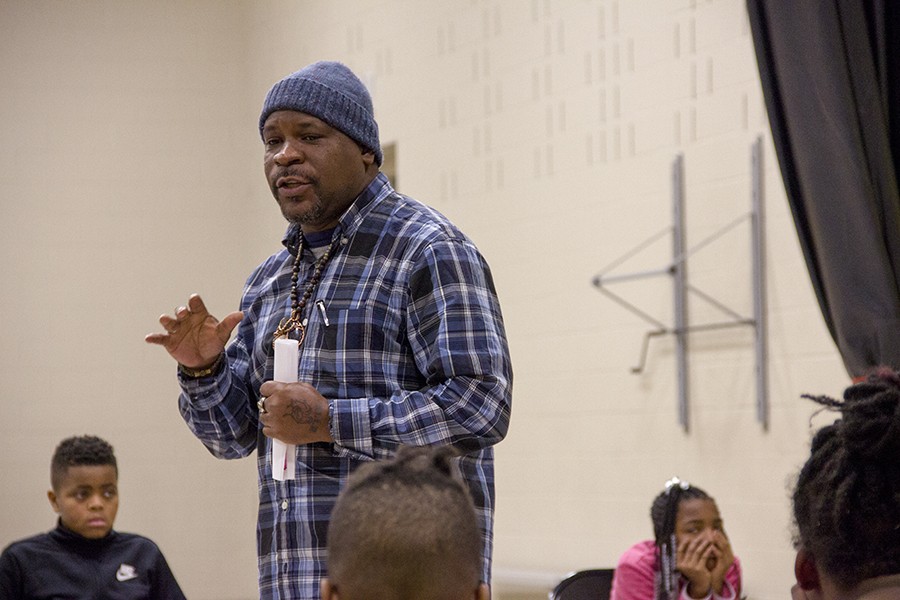 DANNY WICENTOWSKI
Initiated into gang life at eleven, Sultan Mohammad spent most of his teen years as a Crip.

Shawn always wanted to be in a gang, but when he got shot at sixteen — the bullet careening up his wrist, tearing the tendons and exploding through his elbow — he thought seriously about abandoning the life.

He remembers a part of himself urging, "Go ahead. Leave everything." But, he sighs today, "there was this other part of me, which was like, 'Man this is fun.'"

Now twenty, Shawn sits at a diner booth eating a Caesar salad. He's wearing a red T-shirt with the word "Truth" in large white letters across the chest. Earlier, when he traced the dull pink scar up the inside of his right arm, he noted the areas where the bullet tore through muscle, leaving the flesh lumpy and hard. That bullet could have killed him. He still has nerve damage in his elbow.

Yet instead of leaving the gang, sixteen-year-old Shawn just upped his protection. He started carrying two guns instead of one.

Shawn had been initiated before his freshman year in high school. They called their gang "Mad," after the Madison apartment complex in Berkeley. Street shootings became a regular occurrence, with Shawn both perpetrator and target. At McCluer High School, he could get away carrying a handgun to class, and he dealt weed and dabbled in crack. The money was good and fast. By sophomore year, he'd been expelled from several schools over fights and drug dealing.

St. Louis is home to 122 street gangs, with 2,916 members, according to the St. Louis Metropolitan Police Department. But the image of West Coast Crips and Bloods calling the shots is about as accurate today as one of Al Capone's mobsters wielding Tommy guns. In 2018 St. Louis, gangs are rarely organized by rank or formal hierarchy, and individual sets — even those associated with Crips or Bloods — build cooperation and feuds on their own hyper-local terms. In many cases, the members are still in middle school.

Several adults in Shawn's life begged him to consider a different path. His grandmother, for one. There was also Sultan Muhammad, a former Crip who had prowled a section of Vandeventer alongside Shawn's uncle during the mid-1980s.

Muhammad and Shawn's uncle had started their gang careers early, at eleven. By seventeen, Muhammad was serving a prison sentence for first-degree robbery, but from there he managed to stabilize his life. In 2008, he founded a youth outreach program called Real Talk, with the stated aim to help kids "sort through the confusion and contradictions of their lives" and "achieve self-actualization by teaching them how to think in contrast to what to think."

From experience, Muhammad knew the sort of decisions Shawn was facing, and what was at stake. Shawn's uncle did too. In 1994, when he was eighteen, a rival gang member ran him down a speeding car, then backed over him and drove off, leaving him paralyzed. Today he lives in Shawn's grandmother's house, unable to speak or walk. Shawn has never heard his uncle's voice, and yet he still grew up idolizing him, hanging on the details of every story of his uncle's exploits as a Crip.

"I had it right in my eyes," Shawn says now. "I got to look up at my uncle every day, he's in a wheelchair. I chose the same route he did."

Nothing seemed to shake Shawn from his path. It didn't matter that his mother moved him to the town of Winfield, 40 minutes away. Neither did his uncle's silence or his mentor Muhammad's words.

"Sultan, he would tell me to chill out. 'This is not what you want,'" Shawn recalls. "He would say, 'You better look at your uncle as an example.'"

In 2013, Shawn attended several Real Talk sessions, and at one point even spoke to an audience of middle school kids about getting shot, using his recent run-in as a real-life cautionary tale. But it would be another five years before he attended another session.

This time, in February, he returned marked with a new trauma — inflicted not by a bullet, but by more than a year inside a jail cell.