The Syrian Refugees Escaped War, Only to Land in One of St. Louis' Toughest Neighborhoods 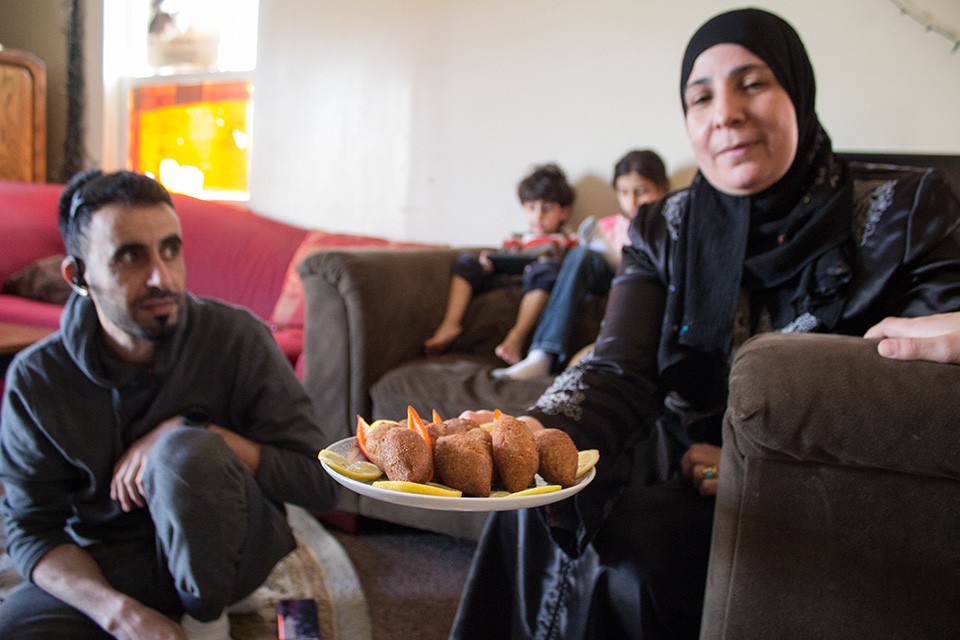 SARA BANNOURA
Iman Alkrad is the matriarch of one of a handful of Syrian refugee families still living in a run-down apartment complex in north St. Louis.

At the dinner to benefit Syrian refugees, there aren't enough seats for the Syrians. The room at the Boo Cat Club is packed, and Jessica Bueler is flitting around, managing the event, making sure the crowd of mostly white St. Louis women is enjoying the food. A young Syrian boy stops her and quietly asks where he's allowed to sit.

The boy walks back to where his family of five is standing pinned against the side wall of the event, and whispers something to his dad. His dad looks as if he were told to sit in every seat at the same time. Bueler catches this and zips over, leading the family to a central table where she asks spread-out diners to scooch together.

This is Bueler's thirteenth Supper Club dinner, in which she invites St. Louisans to pay $25 for the chance to eat home-cooked Syrian food and meet a few of the 68 Syrian refugee families that have been resettled in St. Louis since 2014. Six of them cooked this evening, and all the night's proceeds will go to them.

In 2016, Bueler founded the grassroots organization Welcome Neighbor STL after she was horrified by an RFT story detailing the beating of teenage Syrians in north city, and she's been rallying St. Louisans to provide support for refugees ever since. Playing the role of pep-rally leader, she uses loud and ESL-friendly language to introduce the audience to the evening's cooks, who announce what they've cooked — shawarma, kibbeh, fattoush, tabouleh, hummus — and stand awkwardly for the accolades. The thrum of applause thermals into a frenzy when Alifa Alahmad steps forward and says the word "baklava." 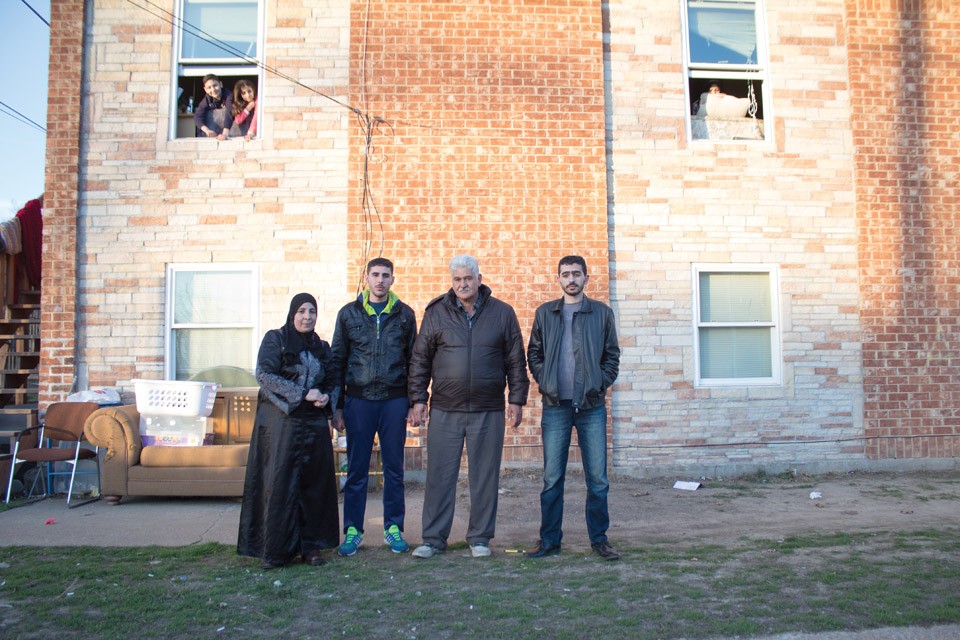 Three of the Syrian cooks live in the Garden Apartments near Hodiamont and Page, about a mile north of Delmar. The block, which adjoins Amherst Park, features the splintered and rotted bones of old homes and a too-wide street paved with more traffic in mind. This is the neighborhood where some Syrian teens were beaten in 2016, drawing Bueler's attention. A dozen or so refugee families have left the area already. The ones who remain haven't had the choice.

No fewer than eleven Syrians greet me in a living room with tea, kibbeh with olive oil and za'atar, olives, makdous, labneh and Arabic coffee set on a tablecloth on the floor.

Apparently still shocked by the violence they've witnessed in north city, the group ticks off a list of what they've experienced collectively at the Garden Apartments in the last two years: the beating of their teenagers, a holdup at gunpoint, two cars smashed in by baseball bats, a chilling attempted kidnapping of one of their daughters, a rock thrown through their living-room window, kids hit with baseball bats, a stolen bicycle, a man creeping around with a stocking mask on (two weeks ago), men breaking into their living room wielding a Taser (one week ago). The wives stay awake until their husbands get home, sometimes as late as 2 a.m. They've called 911 so many times that dispatch provided them with a special number to call.

Then there are the living conditions themselves. A roach crawls across the floor. Iman Alkrad, one of the Supper Club cooks, casually picks it up with a paper towel and kills it. Soon after, I spot another across the room, on the wall. Later, they show me a five-inch-by-ten-inch sticky trap plastered with fully 1,000 insects. They inform me that this trap is today's. As in only today's. Happily, winter put a break on the bed bug infestation that had attacked their children's legs. "When I leave, I'll only take our clothes and some kitchen tools," Iman Alkrad says.

"Everything else is going to waste," her husband Ammar says. "The roaches are inside the furniture."

With an invisible grace, Alahmad and Najlaa Alsaadi take my dishes, sweep away the dinner crumbs, and clean the apartment before I even notice.

Some have suggested that the Syrians' problem in north city is cultural. In 2016, Jeffrey Boyd, the alderman for this ward, suggested to KMOX that perhaps if the Syrians didn't eat their meals on the floor, they might not have an insect infestation. The same week, KSDK's Jason Aubry wrote, "A number of those (cockroach and field mice) problems can be associated with the refugee [sic] themselves not knowing or understanding how things work here in the Midwest, surrounded by an abundance of bugs and animals foreign to them."

Mohammad Rehman, whose company manages the Garden Apartments, suggests that the bed bug and roach problems were caused by bringing in outside mattresses and furniture, and claims that the problem was resolved a year ago. He says he is unaware of the roaches' continued presence. "We have an office in the apartments," he says. "If they have a problem, they have to come over and tell us. That's why we're sitting over here."

Others might suggest the problem is capitalist. Our system incentivizes landlords to take advantage of renters with, say, no English proficiency, few-to-no community ties and nowhere else to go — and therefore no ability to complain. The families blame the insect infestation on their landlord neglecting to cut the grass, and they claim he one day tried to resolve a mold issue by painting over it. (Rehman says this is not true.) Boyd himself disclosed — transparently, at least — in the 2016 KMOX interview that the Garden Apartments manager once contributed to his campaign. Jessica Bueler, for her part, maintains that Boyd has offered her no more than lip service about helping the Syrians. Boyd did not respond to an interview request.

"Conflict is normal between people," Abu Osama, who lives at the Garden Apartments, says. "We've been through trouble back home, but people figure things out. Here, it's so easy for people to pull out a gun. I've seen so many people pull guns out flippantly. I've seen someone shoot someone in the leg just down the street. I've seen someone get shot at a gas station just a couple weeks ago."

"We left death and came to another death," the Alkrads' son Mohammad says.

"If we knew this is what it was going to be like, we would've stayed in Jordan," Iman Alkrad says.

"We're not asking to live in Clayton," Ammar Alkrad interposes, already keenly aware of the places a St. Louisan might aspire to. "Just a better place, something better than this." Despite their frustrated comments, the Alkrads clarify that they’re grateful to be in St. Louis, where they have found the people far more welcoming than those they experienced in Jordan. Here they have the chance to make a life, even if it's one starting from Hodiamont.

The Dar Al-Jalal mosque and Welcome Neighbor STL have worked to relocate Syrians from Garden Apartments to other parts of the city and county. The mosque paid to help with families' leases for one year, while Welcome Neighbor STL raised $15,000, providing $1,000 to each moving family to help subsidize the new residences. Only three remain. The money is there, Bueler says; the complication is a matter of rehoming large families with several children. After getting the Syrians out, Bueler says she wants to focus on Somalian families living at the Garden Apartments, who are also facing violence.

Until mounting back rent forced her to shutter in March, Bueler owned HSB Tobacconist on the Loop; her father founded the business in 1972. Although she founded Welcome Neighbor STL long before closing HSB, the vacuum that followed the tobacco store's closure has shifted Welcome Neighbor STL into overdrive, for the Syrians at Hodiamont and beyond. Bueler recently designed curricula for twice-weekly English lessons for eighteen Syrians at Grace United Methodist Church, organizing pickup, dropoff and daycare services for mothers. The Supper Club she founded has also exploded; Welcome Neighbor STL has received so many recent requests that they've had to put a temporary hold on reserving the cooks.

Bueler stepping in with Welcome Neighbor STL has been a lifeline for the families still at Hodiamont. But the situation continues to rankle. What has been discouraging, Ammar says, is that their section of the apartment complex was where all the incidents occurred, and yet they have been the ones who've proven too difficult to rehome quickly. "We've become part of the past tense now," he says. "People and the media have forgotten about us."

Abu Osama, who has five children, fixes on me intently. He has heart problems stemming from the war in Syria. Certificates earned by some of the young children in school hang on the wall, opposite a boarded-up window. Two of the men in the room in their early twenties hadn't been to a single day of class since the Arab Spring began, and are now working full time to support their families.

"We don't want food or water," Osama says. "We just want our kids to be safe and have a good life. That's all we want. Our future is gone. Now we need to take care of them."