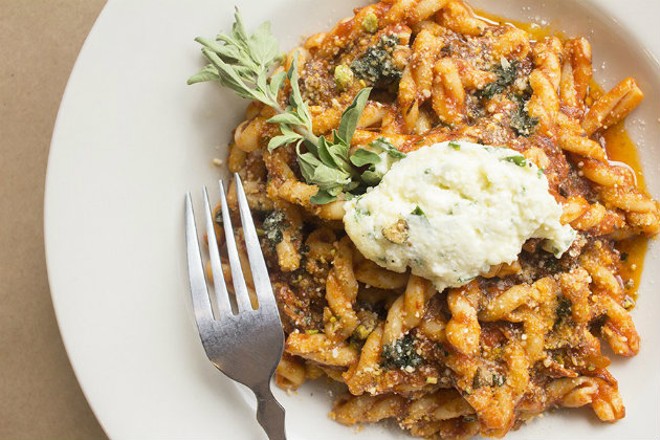 Pepe Kehm understands that the first things that come to mind when people think of the Middle East are politics and religion. That's why he's banning them from his upcoming Pop-Up for Peace.

"Politics and religion are embedded in our talk about the Middle East," Khem explains. "To lay that stuff down for a night and to eat and drink and relax — maybe that's the start of a conversation."

Pop-Up for Peace, which will be held at Kehm's Italian restaurant, Peno (7600 Wydown Boulevard, Clayton; 314-899-9699), was not envisioned as means to achieve such a lofty goal as world peace. In fact, Kehm has no agenda other than exposing people to the cuisine of the eastern Mediterranean after tasting the delectable cooking of two local Jordanian woman.

"I've known these two ladies for a while through their son," Kehm explains. "I ate their food and it just knocked me off my chair. They are so proficient with flavor profiles, and I could just tell I was tasting generations and generations worth of cooking. I just thought that I have to do this."

Kehm was so moved by the women's cooking the he got to thinking — why not showcase a variety of flavors from across the Mediterranean, focusing on what unites rather than what divides? He decided to bill the event as a breaking of bread with chefs from a variety of traditions — Jordan, Palestine, Lebanon, Syria, Israel.

Though most of the countries represent the Middle East, Kehm explains that the Italian cuisine he normally serves at Peno fits in perfectly — more than many people would think.

"When people talk about Mediterranean food, they don't always talk include that part of the Mediterranean," Kehm says. "Calabria and Sicilian cuisine is heavily influenced by a variety of places — Africa, Turkey, the Middle East. I like to tell people we are the 'Creole of Italy.'"

In addition to the two Jordanian women, several other chefs from around town have signed on to the event, including Max Protzel of Protzel's Deli and Ben Poremba of Bengelina Hospitality Group, whose properties include Elaia, Olio, Nixta, Parigi and the Benevolent King — an addition to the lineup that keeps with the spirit of the event.

"[Poremba] and I have had our differences, but I love what he does," Kehm says. "He's a guy who does the best that he can with what he creates in this city. I respect it."

Tickest to the Pop-Up for Peace are $30 and include all you can eat and drink from several food and beverage stations that will be set up in the Peno parking lot. Guest will also be treated to the music of Eric Lysaght.

"With what's going on in the world, there are a lot of people who may not have the chance to eat each other's food," says Kehm. "That's why we are saying 'no politics, no religion.' We're just going to have a party and have good food."

We are always hungry for tips and feedback. Email the author at [email protected]
© 2023 Riverfront Times