After Thieves Stole Guitar Man's Guitar, His Fans Stepped Up in a Big Way 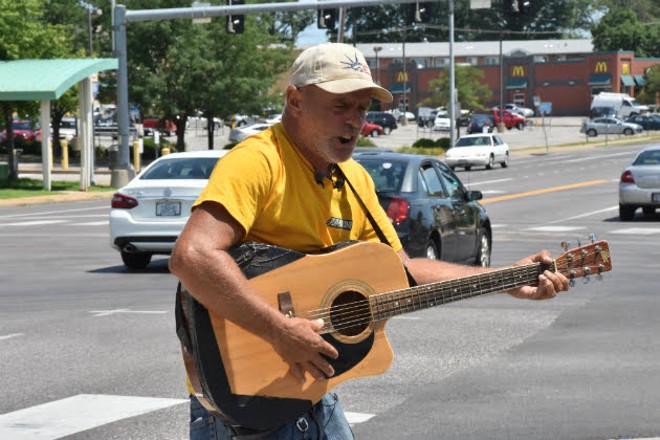 DOYLE MURPHY
Roger 'Guitar Man' Ulrich playing a backup guitar after his was stolen on Monday.

The Guitar Man of south St. Louis had his set cut short on Monday by thieves.

Roger Ulrich, 57, has played nearly every day for the past four years at the corner of Gravois and Hampton avenues. He performs next to the Steak N Shake, and most days, he takes a quick break inside the busy burger shop.

He leaves his guitar — most recently an Esteban — propped between light poles while he cools off.

"I go in, and I go to the bathroom, and when I come out, my guitar is always there," he says.

Except on Monday, it wasn't. He says a witness told him somebody in a white SUV took off with it. Just like that, the Guitar Man was without a guitar.

The Esteban had been a gift from a sixteen-year-old fan. Ulrich is a celebrity on this end of the city, where commuters have grown accustomed to seeing him pound out popular country and rock songs from the 1950 and 1960s. His favorite is John Fogerty — "Down on the Corner."

Word of the theft spread quickly. The news site Real Stl News posted a story with a video of Ulrich performing, and soon there was a GoFundMe to raise cash for a new guitar.

On Tuesday, Ulrich returned to his corner with an old, taped-up guitar he used to play before the Esteban. Two new guitars were already waiting for him inside the Steak N Shake, dropped off by supporters. Another arrived as he conducted interviews with news reporters.

James Joseph, donor of the third guitar, says he read about what happened on Facebook.

"It brought tears to my eyes," Joseph, 39, says. "It really did. I can't believe someone would steal his guitar."

The Guitar Man grew up in Affton, and dropped out of Affton High School in the ninth grade, he says. One of his brothers is buried just down the Hampton Avenue in New St. Marcus Cemetery.

Ulrich has played guitar since he was nine years old, he says. Later in life, he started asking bar owners if he could perform in their spaces. Invariably, they refused.

He had lived a rough life, landing on the streets at times while he struggled with alcoholism. One day, while he was eating at the Peter & Paul Community Services soup kitchen, he says one of the staffers suggested he trying playing at a park near Busch Stadium.

He has been a street performer ever since. Now sober for two and a half years and living in an apartment near Gravois Park, Ulrich says he likes the instant feedback. Music keeps him busy. One of his originals, "I Don't Know Where to Go," is about trying to fill his Friday and Saturday nights after he gave up drinking.

He was stunned when he discovered his guitar had been stolen on Monday, but he says he can't be too upset with the thieves.

All in all, it has worked out. A steady stream of drivers honked, waved and handed dollar bills out of their windows as Ulrich played on Tuesday. Now he has three new guitars, possibly more on the way if the fundraiser comes through. And he says he has a show scheduled for a private club in the Grove. "I'm already ahead."