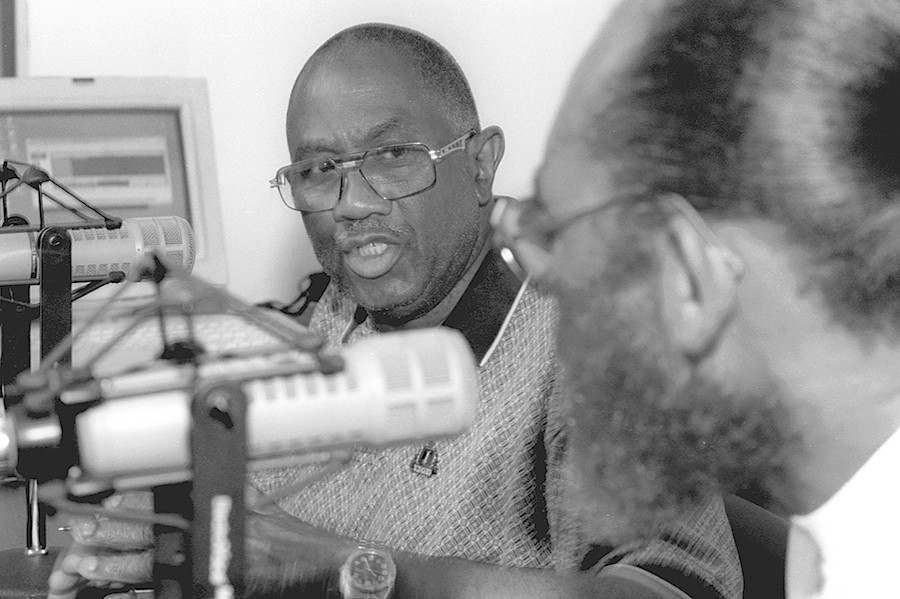 PHOTO BY JENNIFER SILVERBERG
Onion Horton, on the air.
With the morning's Post-Dispatch, Chicago Tribune and USA Today at his elbow, Richard "Onion" Horton is talking into a microphone about morality.

"Thirty or 40 years ago, black people were better than white people morally," he declares. "There is no question about it. Now, black people are no better. You can't get lower. We can't look at anything where we are superior." He proclaims that he doesn't speak from moral authority, but he does have his limits. "I've never used a word of profanity in my life," he says "Do you believe that?"

Lavonda, a regular caller, joins Onion in lamenting the decline: Black people think nothing of smoking marijuana openly. Cussing has become part of the lexicon. Television shows aimed at blacks are terrible, especially Black Entertainment Television, which Onion calls "lower than the whale manure on the bottom of the ocean." If Onion had his druthers, Chris Rock would be peddling pot on a street corner instead of getting paid to say "motherfucker" and joke about genitals.

A few seconds later, it's time for something completely different.

Today is a big day at the Board of Aldermen, which is scheduled to vote on a redistricting plan designed to throw Ald. Sharon Tyus (D-20th) out of office. Onion has arranged for Tyus to call in on a cell phone before the meeting, and she's on the line now. The interview starts innocently enough.

"Are you ready for battle?" Onion asks Tyus, who is on her way to City Hall. He sounds ever so polite, giving no indication that this will be anything other than another chance for Tyus to hurl accusations and drum up support for her cause. Onion bends down and hitches up his socks while Tyus assures him and his audience that she's going to give 'em hell -- and so will a judge, once this redistricting scheme lands in court. Yes, Tyus is ready for battle today. But not the one she's going to get now.

Onion doodles on one of his newspapers as he steers the conversation to Ald. Kenny Jones (D-22nd), who is supporting the redistricting plan and has a history of bad relations with Tyus. He wants Tyus to explain why she supported Ald. Jim Shrewsbury (D-16th) -- a white man -- over Jones for aldermanic president. "Let me say so people can understand," Tyus says. "I would not have voted for Kenny Jones. Kenny Jones is part of the culture of this place." She draws a comparison to Clarence Thomas, whom regular listeners know as evil incarnate in Onion's world. The doodling stops.

Tyus might as well have lit a fuse on a stick of dynamite. Her part in this conversation is over.

"Until I see a group of white people drop a white man in favor of a group of blacks, I will never support a white man," Onion thunders. "They never pick us." Tyus, in ever-increasing volume, tries to interrupt, but it's a hopeless cause. Onion rips Tyus for her recent alliance with former Mayor Freeman Bosley Jr., long her political enemy. Onion blames Bosley for engineering the 1995 defeat of Ald. Velma Bailey (D-19th) when she tried to become aldermanic president. With Bosley's endorsement, Francis G. Slay won that contest and used the position as a stepping-stone to the mayor's office, where many believe the redistricting plan was hatched.

"You can disagree, but it cannot affect me," Onion continues. "All the white people went after you, and a bunch of Negroes joined them. How many white people are going to vote with you today?" For once, Tyus doesn't have a quick answer, not that she would be allowed one anyway. After a nanosecond of silence, she starts protesting, but it's impossible to hear what either she or Onion is saying because they're both shouting now, drowning each other out on JBL bookshelf speakers that weren't made to handle this many decibels. It's a war Onion can't lose. He warns Tyus once, twice, then switches her off. "When you stop talking, I'll turn the volume back up," he tells her.

He finishes his point, which is, essentially, twofold: Black elected officials need to support each other, and Tyus is something of a hypocrite for embracing Bosley, who no longer holds elective office and can't help her now. Only then does Onion give the alderwoman another chance, turning the volume back up. But Tyus doesn't want to play anymore. "I'm just driving up to the Board of Aldermen now," she says. Then there's silence. "I think she left," Onion says, stating both the obvious and the understandable.

After all, Tyus doesn't need this. Although his show on newblackcity.com is available around the globe and listeners can call toll-free on a number that works anywhere in America, Onion doesn't have near the audience he once enjoyed in a career that dates back a quarter-century. He was once one of the hottest black talk-show hosts on St. Louis radio, but after stints at seven stations, he's landed in a my-mom-can-make-the-curtains affair, and it shows. If tables were to be brought in, there'd be enough room in New Black City offices for two games of pingpong at the same time. No coffee machine, no receptionist, no potted plants and no paid employees -- everyone is working for the day Onion and his business partner, Mark Kasen, get back on the airwaves so commuters can listen and advertisers will pay big bucks. They may be getting close. A St. Louis jury in June decided that the partners' former lawyers had cheated them in a deal to acquire their own station.