Inside Baseball: A tour of St Louis landmarks from the famous to the infamous (and everything in between)

St. Louis has always been a baseball town. In fact, a rare 1764 edition of Riverfront Times reports that Pierre Laclede and Auguste Chouteau celebrated the establishment of their fur-trading post on the banks of the mighty Mississippi with a game of pepper.

OK, so maybe St. Louis hasn't always been a baseball town. But ever since a ballplayer from back East laid out the first diamond in Lafayette Park in the 1850s, locals have taken to the national pastime like Albert Pujols to a hanging slider.

The team now known as the St. Louis Cardinals has been drawing fans since it entered the old American Association in 1882. The woeful St. Louis Browns, who departed for Baltimore 55 years ago (and whose most famous moment over 53 seasons came when the owner sent a midget up to bat) still have an active fan club. A couple years ago, a few buffs put up a plaque honoring the town's short-lived Federal League ballclub.

We love baseball, and we love our players. Go to a Cardinals game today, and among all the Pujols #5 jerseys and T-shirts you'll see more than a few fans wearing the names and numbers of Redbirds past, like Fernando Viña and David Eckstein — not superstars, but scrappy ballplayers who hustled their way into our hearts.

Those hearts break easily, though. In 1998 we cheered ourselves hoarse as one of our gods blasted an unthinkable 70 home runs. A few years later, when he fell back to Earth, it hurt. It still hurts. And mention the 1985 World Series and umpire Don Denkinger to a St. Louisan at your own risk.

But through all of the struggles this city has endured — the collapse of industry, the wasting away of a once thriving downtown, an uneasy racial and economic divide — we have always united behind our beloved team playing our beloved game.

Welcome to St. Louis, a baseball town then, now and forever. 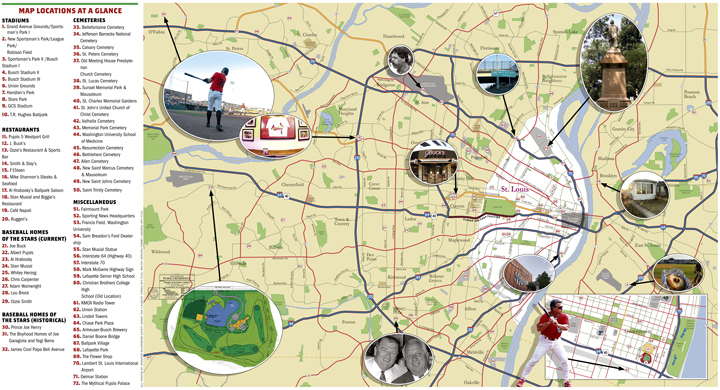 Map Locations at a Glance:

Bibliography
Space limitations prevent a thorough citation for each entry in the tour. However, several sources were absolutely indispensible to this project:

The Spirit of St. Louis by Peter Golenbock (Harper Collins, 2000) is a largely oral history of baseball in St. Louis from the 1850s through the end of the twentieth century.

The Cardinals Encyclopedia by Mike Eisenbath (Temple University Press, 1999) includes year-by-year details of each Cardinals team as well as player profiles and statistics.

Details of the gambling scandal that brought down Rogers Hornsby are taken from Charles Alexander's Rogers Hornsby: A Biography (Herny Holt & Co., 1996).

The websites Baseball Reference (www.baseball-reference.com) and Baseball Almanac (www.baseball-almanac.com) provided individual and team statistics, game results and box scores. The grave sites and much of the background information in the "Cemeteries" section were found using the site Find a Grave (www.findagrave.com).