PM BBQ cooks up the best brisket in town 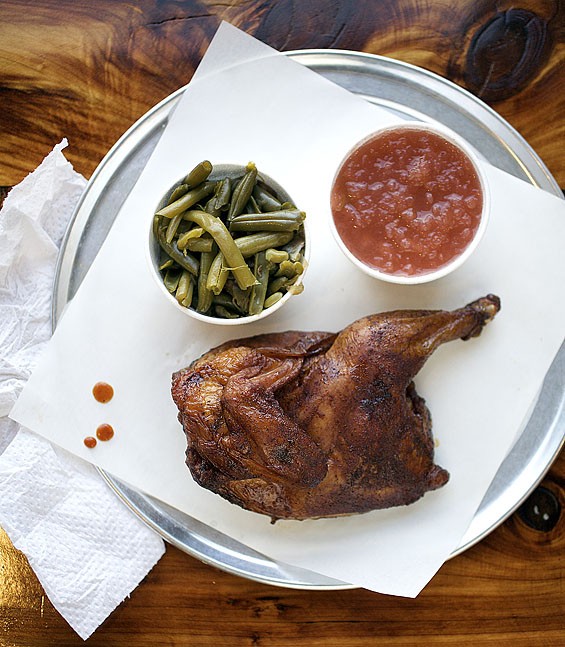 Jennifer Silverberg
The half chicken at PM BBQ.Click here to see a slideshow of all the smoky goodness at PM BBQ.

This fall the Food Network debuted a new program, Food Feuds, in which Iron Chef America star Michael Symon travels the country, deciding the winners in good-natured battles between two restaurants that specialize in the same thing. One of the first episodes featured St. Louis — a contest between the ribs from two of the area's barbecue meccas, 17th Street Bar & Grill and Pappy's Smokehouse. Though Symon's choice was certain to disappoint one joint's fans, all local barbecue aficionados should have watched the segment with a smile as broad as a full slab of baby-backs.

Not that we've suddenly developed our own unique form. But if you want good barbecue — especially if you favor a Memphis-style dry rub — your options continue to expand. This week, in fact, your options expand all the way to the western limit of west county, where PM BBQ opened this past March. The restaurant occupies a small storefront, between Wild Horse Grill and an El Maguey, in the Chesterfield Towne Centre shopping plaza at the intersection of Long Road and Edison Avenue just south of Chesterfield Airport Road.

The space is modest but homey, with lots of wood and Americana. The most striking touch might be the bell that clangs as you open the front door, though barbecue hounds will gravitate to the ribbons and plaques that grace the wall beside the soda fountain. Owners Paul Lamers and Mark Ruck (the P and M, respectively, of PM BBQ) built a following by winning awards in local competitions and through a stand at the farmers' market in Wildwood. This is their first restaurant.

The menu is straightforward: pulled pork, pulled chicken, brisket, baby-back ribs, a half-chicken. You can also order a baked potato or potato chips ("Hillbilly Nachos") topped with beans, cheese and your choice of meat. Barbecue joints are the original fast-casual restaurant: You place your order and pay at the counter — check the dry-erase board first to see if any meats have sold out — and the food is brought to your table soon thereafter.

PM trumpets its half-chicken: "First place says it all," the menu claims. And the bird lives up to the hype. The chicken looks to be a fryer, and a small one at that. The dry rub gives its skin an appealing reddish-brown color, speckled with flecks of black pepper. The rub has a mildly peppery flavor, accenting rather than dominating the poultry. The meat is tender, especially the dark meat, with a good balance between the bird's natural flavor and the smoke from hickory wood.

Smoked for twelve hours and as tender as medium-rare roast beef, the brisket is as good as any in town. Brisket is a cut that's prone to dryness, which makes PM's preparation all the more impressive, given that they slice the meat about a quarter of an inch thick, not paper thin, allowing a smaller margin for error. These slices are also the ideal heft for conveying the meat's rich flavor without losing the nuances imparted by the smoke.

Of course, around these parts, barbecue is synonymous with pork, and PM's pulled pork and baby-back ribs don't disappoint. The pulled pork relies on the natural affinity for pig and smoke. The meat isn't quite as tender as the best pulled pork — if you like, a squirt of one of PM's sauces (more on these in a moment) alleviates this — but it's quite good, and I liked the few charred bits that found their way into my sandwich.

While the seasoning on the pulled pork is relatively restrained, the ribs are coated in an aggressively peppery dry rub that almost overwhelms the pork and wood-smoke flavors. The meat is appropriately tender, yielding easily to the bite but not falling off the bone. There is just enough fat to moisten the meat.

There are four sauces: sweet, spicy, Carolina and mustard. As a general rule, I prefer a spicy sauce to a sweet one, but at PM BBQ the sweet sauce is more complex. Really, it didn't strike me as very sweet at all. It has a mild tang and a definite note of cumin and other warming spices. The spicy sauce has a much stronger tang and a decent kick. The Carolina sauce is, by its nature, thin and vinegary, with sharp heat. To my taste, at least, a little goes a long way.

The ribs, half-chicken and pulled-pork, and brisket sandwiches all come with two sides. (You can also order the pulled pork, pulled chicken and brisket à la carte, by the pound.) Sides include French and sweet-potato fries, both of which are crisp and perfect for testing out the different sauces. The green beans are very tender, though not boiled into mush; a few pieces of smoked meat round out the flavor. Likewise, a few pieces of smoked chicken accent the "Smokehouse" baked beans. Without doubt, the standout side is the sweet-corn spoon bread, like the best cornbread you've had crossed with a good pudding.

Could PM BBQ hold its own in a televised "battle" with superstars like Pappy's and 17th Street? What if we changed the parameters from pork ribs to brisket or chicken? If we cherry picked our favorite dishes from our favorite St. Louis barbecue joints, how awesome would the resulting restaurant be?

These are questions to be entertained not answered — and preferably over a pile of discarded rib bones.