Prime 1000 steakhouse is batting a thousand in the loft district 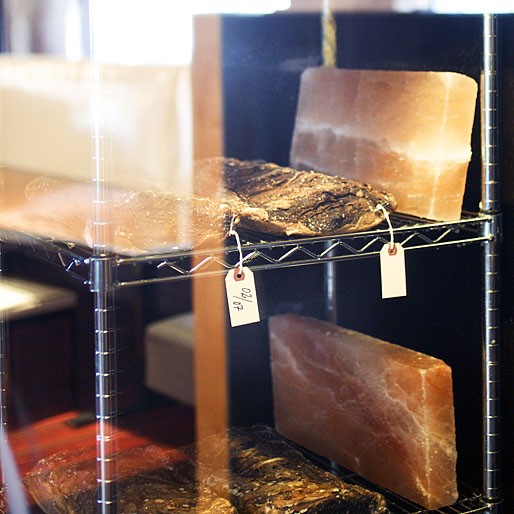 Upon entering the four-month-old steak house Prime 1000, to the left of the host's stand you will see your dinner. Well, not specifically your dinner, but the meat that will be served to diners over the next few weeks. This chamber, a series of shelves behind glass, is where the restaurant dry-ages its steaks. That Prime 1000 dry-ages its steaks in the first place is significant: Though generally believed to create a better steak, dry-aging is costly, an expense that not every steak house wants to pass on to diners already paying a pound of flesh for their pound of flesh.

That it lets you observe the process is almost unheard-of.

Dry-aging is a very polite term for decomposing. Over several weeks, under a controlled temperature (a few degrees above freezing) and humidity level, enzymes within the meat break down its molecules, making the meat more tender and concentrating its flavor. The reason this process usually occurs out of our sight — besides the fact that many of us don't want to be reminded that our delicious steak was once a living creature that ate and crapped and said moo — is that sometimes, as a byproduct of this process, a fungus forms on the meat's surface. Don't worry: This gets trimmed.

The dry-aging chamber is a sign that Prime 1000 is serious about steaks, but its dual function as a design element — even if you didn't know what it was, you would find it visually striking — reveals this as a thoroughly modern restaurant, not merely one more stodgy cabernet-and-cigars steak house. The space (the former Kitchen K) is open and airy, with the expected loft-district design elements of stone, brick and exposed beams, balanced by wood accents and leather furniture. The light fixtures, spindly structures encased in white fabric, are especially lovely.

Much of Prime 1000's pre-opening publicity focused on owner Claus Schmitz, who also runs the popular restaurant Mosaic directly across Washington Avenue. Schmitz sold his share of Prime 1000 in January, however; his original partner Ed Curtis III remains. Ben Lester oversaw the launch of the menu for Schmitz. In the kitchen now is Ray Carpenter.

Prime 1000 offers dry-aged, USDA Prime steaks and grass-fed steaks from Missouri. On my visits, the printed menu mentioned a third category, American Wagyu beef, but this is no longer available. In its place is Wagyu beef born in Japan and then raised in Australia; an indulgence even by steak-house standards, it costs $70 for a four-ounce serving.

The dry-aged steaks are terrific. The exteriors have a beautifully charred crust, and the meat possesses the rich, nutty flavor for which dry-aged meat is so revered. The best of those that I sampled was the bone-in rib eye, a sixteen-ounce cut. (There is also a boneless ten-ounce rib eye.) Cooked medium-rare, the steak had a buttery texture luscious with fat. It was the sort of steak from which you scrape the little pockets of crisped fat still clinging to the bone and, if your wife isn't looking, eat them.

The dry-aged New York strip (available as a ten- or fourteen-ounce cut) was also good, if by its nature not quite as tender or as flavorful as the rib eye. I also tried the grass-fed New York strip, which is neither dry-aged nor USDA Prime but still very tasty, with grass-fed's signature mineral character. Cuts of grass-fed beef generally aren't as well marbled as their corn-finished counterparts, but this was a very tender steak. The burger, only available at lunch, is also made from grass-fed beef and is outstanding.

In a welcome break from the standard steak-house practice of charging you à la carte for everything, each steak at Prime 1000 includes one side dish and one side sauce. (Extras of each are available à la carte.) The sauces vary from a classy cabernet-veal reduction to "uni butter," an enticing prospect that, when I tried it, had no discernable flavor of sea urchin; it tasted like straight-up butter. The poivre vert sauce is also quite good, but avoid the candied bacon jus — it tastes like soy sauce.

The sides are updated versions of the usual steak-house suspects: The creamed spinach is spiked with truffle oil, for example, the grilled asparagus topped with Serrano ham and a quail egg. The mac and cheese is made with smoked white cheddar and, at a conservative estimate, will take five years off your life. You won't miss them. The potato gratin, made with Roquefort, is a standout, simply elegant.

An unusual inclusion among the sides is a plate of blistered shishito peppers, lightly fruity, with a good heat to them. These are also available as an appetizer, where they are paired with cubes of gelatinized corn consommé. This is interesting, if not revelatory, but it's indicative of the modern culinary trends Prime 1000 has embraced. Sweetbreads are pan-fried crisp and served with chunks of Duroc bacon and roasted artichokes with a truffle emulsion for a rich, earthy appetizer. Even the fried calamari are classed up as "Himalayan salt and pepper squid." Do they live up to such lofty heights? No, but they are damn good calamari.

Instead of plain old carpaccio, there is a trio of grass-fed tenderloin carpaccios, each of three tissue-thin pieces of raw beef (quite good by themselves) paired with a different accompaniment. Of these, a garlic aioli with a little peppery arugula mixed in is the best. There is also an autumnal arrangement of shiitake and hon shimeji (an uncommon East Asian variety) mushrooms flavored with apple saba and a shaving of Grana Padano cheese. The third concoction, a blend of black-garlic ponzu and ginger "bubbles," overwhelms the delicate beef.

Bubbles, emulsion, foams: There is something of the New American cliché to Prime 1000's approaches. Look past these, though, and you see a steak house lavishing more care on the ancillary dishes than we're used to seeing around these parts. Sampling a non-steak entrée at a steak house is usually a chore, but the black bass here is stupendous, a perfectly seared piece of tender fish, its ocean flavor deepened by an uni emulsion — yes, another emulsion, but this one at least tastes good — and contrasted by large pieces of candied bacon.

Prime 1000 falters, though, with two important elements of any steak house: the wine list and the service. The wine list doesn't match the caliber of the restaurant, neither broad nor deep, with a few token trophy wines like Opus One added as an attempt at a veneer. Service is rushed for a restaurant of this caliber (and it's a crapshoot whether you'll receive the excellent bread service, which includes saffron-spiked butter). Dessert was also hit-or-miss: Squash bread with dulce de leche ice cream and pepitas was excellent, but spice cake tasted of two days in the fridge.

Burnish these aspects of the restaurant, and not only will Prime 1000 stand out, thanks to its eye-catching dry-aging chamber and undeniably swank setting, it will prosper.