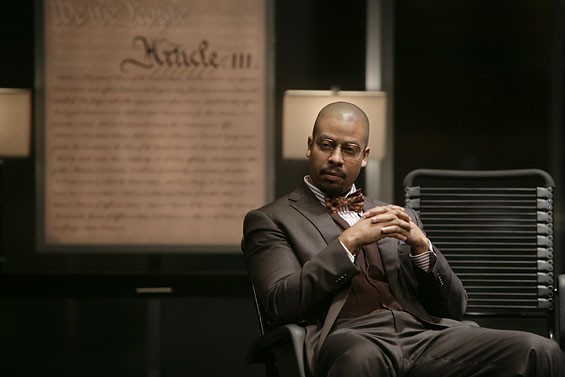 Jerry Naunheim Jr.
Morocco Omari
"Race is the most incendiary topic in our history," a white attorney tells his black paralegal in David Mamet's prickly new whodunit. "And the moment it comes out, you cannot close the lid on that box." But of course, Mamet has no interest in closing the lid. In Race, which is currently on view at the Repertory Theatre of St. Louis, Mamet pries open the lid with a crowbar and then delights in rubbing the sensitive issue in our faces. Mamet is an equal-opportunity insulter; everyone, regardless of creed and color, gets targeted. Yet despite all its cheeky, sometimes provocative, barbs, Race is about as insightful as an episode of All in the Family — only longer, and without as many laughs.

Despite Mamet's reputation as a provocateur of abrasive theater, don't for a moment think that Race has anything portentous on its mind. As Mamet once explained, "People have tried for centuries to use drama to influence, to comment. It doesn't work.... The only thing the dramatic form is good for is telling a story." That's what's happening here: Mamet is telling us his latest story. It's not as funny as his lampoon on American politics in November; it lacks the pathos of the lost American Dream in Glengary Glen Ross. But after a lifetime in the theater, Mamet is adept at crafting a surprise-laden melodrama with dialogue that crackles.

The action occurs behind frosted glass walls through which (thanks to cunning scenic designer John Ezell) nothing is quite clear. This is the inner sanctum at the esteemed law firm of Lawson & Brown. Jack Lawson is white; Henry Brown is black, as is their new paralegal Susan (Zoey Martinson, sleek and sly). They must decide whether to represent Charles Strickland (the suave Mark Elliot Wilson), a scion of wealth, white of course, who has been accused of having raped a black woman in a hotel room. Strickland insists the sex was consensual; he is in dire need of an attorney before he is lynched in the court of public opinion. Will Lawson & Brown take the high-profile case?

Their internal debate provides a forum for all sorts of pithy harangues and rejoinders. Think of a racial slur, and it's probably here. But more than race, what most fascinates Mamet are the machinations that surround due process of law. Even in his screenplay for Sidney Lumet's 1982 courtroom drama, The Verdict, the most compelling moments were the behind-closed-doors sequences when a prestigious defense attorney (James Mason) taught his client how to lie on the stand. Here again Mamet is riveted by power and the abuses thereof. If you share that intrigue, Race might be your swig of Scotch.

Apparently many critics don't. When Race opened on Broadway in December 2009, it received mostly unenthusiastic reviews. Yet the play defied the critics and chalked up nearly 300 performances, making it Mamet's longest-running Broadway production since the Pulitzer Prize-winning Glengary Glen Ross in 1984 (and the second-longest Broadway run of his entire career). Perhaps Race's surprising longevity is due to the fact that its plot conjoins suspense with morality. "We're going to put on a show," Jack tells his associates; and that's what Mamet does here. This show deftly coats substantive-sounding dialogue in a slick, shiny patina.

For cleverly garbing the defendant in numerous shades of gray, costume designer Myrna Colley-Lee matches Ezell's scenic style points in the ambiguity department. Sad to say, the actors who portray Messrs. Lawson and Brown aren't nearly such a good match. Morocco Omari simply inhabits his role as Brown, effortlessly projecting authority and presence on the stage. But in the central role of Jack Lawson, Jeff Talbott functions like an alumnus of the windup-doll school of acting. His performance is all empty effects, a veritable onslaught of twitchy hands and buckling knees that is removed from reality. Anyone who would hire this attorney is guilty of miscasting in the first degree.