Being Flynn can't stop telling us exactly what to feel 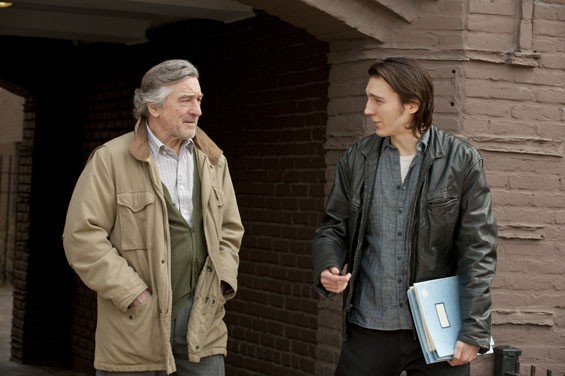 Written and directed by Paul Weitz, Being Flynn is an adaptation of Nick Flynn's 2004 memoir Another Bullshit Night in Suck City, which explored the author's pivotal experience working at the Boston homeless shelter where his down-and-out dad Jonathan was a frequent guest. In the movie, Paul Dano and Robert DeNiro play hipster-fuckup son and bigoted ex-con prodigal father. Mimicking Flynn's nonlinear approach to narrative nonfiction, Weitz jumps back and forth between time periods. Nick was raised by a single mom (Julianne Moore, reliably real), and his dad was manifest as an absence woven into the present day, when Dad's presence is a manifest burden.

Both men are self-styled scribes (Jonathan has been composing an epic novel in his head for decades; Nick scrawls navel-gazing poetry), and drunks with delusions of grandeur. Weitz lets each take turns as patently unreliable narrator. Their internal monologues seem to know they're on a split schedule: "Don't worry, you're back in the hands of a master storyteller," Jonathan says when we cut back to his perspective after a stint of Nick's narration, but Weitz isn't interested in exploring the meta possibilities of this approach.

DeNiro might as well be wearing a mirrored sandwich board in his every scene opposite Dano, as the theatrics of his dissolving mental state are so blatantly a device to force Nick to confront a reflection of his own demons and fears (his mom's suicide, his escalating addictions, his ability to commit to neither women nor career) by looking at himself reflected in his father. This subtext is turned into text in a climactic confrontation scene. "You are me! I made you!" Jonathan yells at Nick. The son's response? No, I'm not!

Being Flynn is as over-edited as your standard contemporary shoot-em-up. What the actors are unable to get across emotionally (which is a lot: Dano and DeNiro, both of them all big actorly tics, often seem like they were filmed in different rooms), Weitz hammers home via near-constant music. A welcome-to-the-shelter montage riding along on a breezy source cue? Uh, sure, OK. A major character's suicide dramatized via what amounts to a Badly Drawn Boy music video? Yikes.

Nick Flynn's second memoir, The Ticking Is the Bomb, partially chronicled his relationship with a woman he called Inez, a stand-in for his now-wife, actress Lili Taylor. Bomb is implicitly referenced in Being Flynn through the casting of Taylor in a small roleand the casting of black actress Kelly McCreary in a single scene as Nick's new wife, Inez. The racial makeover of the Inez character seems intended to force the point that the son has taken a different path than his casually racist dad. It's the ultimate example of the way Weitz insists on reducing human complexities to black and white.