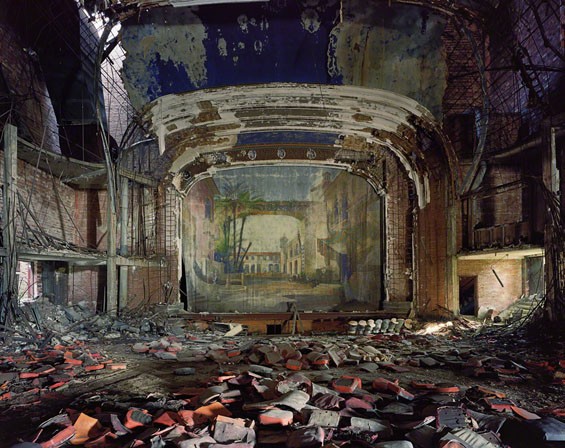 Focusing on large-scale contemporary photography, this show identifies a new, prevalent strain whose practitioners eschew traditional realism in favor of deliberate fabrication and snapshot immediacy in favor of meticulous manipulation. Divided into four sections — public spaces as theater; elusive narratives; portraiture as performance and constructed spaces — the exhibit inspects its theme with acuity, drawing several dozen expansive works into its discerning field of view. A woman standing in a driveway stares blankly into a lit domestic window in Untitled (snowy valley) (2006) by Gregory Crewdson; a spectacularly ravaged, abandoned theater in equally decimated Gary, Indiana, inverts the equation in a 2008 photograph by Andrew Moore. Figures are scarce here; when they do appear, they function as props or narrative prompts: static, manicured, pre-positioned. Seen from this perspective, it's space itself (as opposed to we who merely occupy it) that embodies endless dramatic potential. The suggestive stillness of these pieces highlights a curious contradiction: In the context of our spectacle-saturated culture, images rooted in the all-too-familiar tropes of popular entertainment (cinema, theater) are resolutely unspectacular, while those that depict a baldly contrived "reality" strike a salient emotional chord. Doubtless, at this very moment, someone in some distant (and cluttered) room is on the verge of untangling that mystery. We, meanwhile, must content ourselves with the knowledge that the mere act of looking closely is a surreal, creative feat. Through May 13 at the Saint Louis Art Museum, 1 Fine Arts Drive (in Forest Park); 314-721-0072 or www.slam.org. Hours: 10 a.m.-5 p.m. Tue.-Sun. (10 a.m.-9 p.m. Fri.)