Così fan tutte asks the musical question: Up for a night of fiancée swapping? 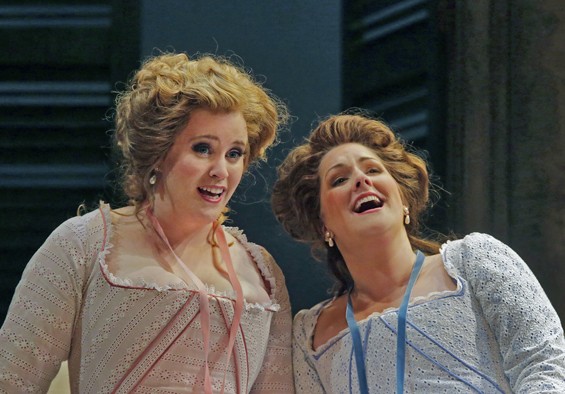 Preposterous plots and opera go together like White Castle and Natty Light. For proof one need look no further than the collaborative oeuvre of composer Wolfgang Amadeus Mozart and librettist Lorenzo Da Ponte. Over the past three seasons, Opera Theatre of Saint Louis has undertaken to stage the Mozart/Da Ponte corpus in the order in which the classic operas were conceived, from Le nozze di Figaro (1786) to Don Giovanni (1787) to this year's series finale, Così fan tutte (1790). When it comes to implausible plotlines, Così fan tutte can lay claim to the Golden Cheese Fry. Which makes OTSL's sparklingly witty and emotionally compelling staging all the more astounding.

The unmitigated theatrical delight is a spectacularly successful team effort. The foundation of the production is Jeremy Sams' elegant translation from the Italian. With uncanny skill, Sams melds the Mozart's sprightly melodies with the natural rhythms of speech, imbuing the opera's lyrical wordplay with a spikiness worthy of Noël Coward or Oscar Wilde and a tuneful excess that's reminiscent of the best of Gilbert and Sullivan.

Così boils down to a six-character story that's as narratively cohesive as an MMA cage match. Two young army officers, Ferrando (David Portillo) and Guglielmo (Liam Bonner), are engaged to a pair of lovely sisters, Dorabella (Kathryn Leemhuis) and Fiordiligi (Rachel Willis-Sørensen), respectively. When the men boast of their fiancées' fidelity, their misogynist pal Don Alfonso (James Maddalena) suggests a wager: The soldiers will pretend to be sent off to war but sneak back into town in disguise, whereupon each will attempt to seduce the other's betrothed.

Michael Shell's meticulous direction requires his actors to execute their parts with painstakingly perfect timing in order to wring from the script every possible laugh. The youthful cast is uniformly superb, each member extracting maximum individuality from his or her role while bringing a unifying grace and clarity to Mozart's music. Soprano Willis-Sørensen in particular executes a rare hat trick as she imbues Fiordiligi's solos with (in turn) parody, playfulness and passion. Maddalena's bottom-of-the-well baritone smoothly evokes the jaded Don Alfonso, while Jennifer Aylmer's brisk soprano plumbs the comic possibilities of Despina, the sister's conniving maid, to the hilt. She's a zaftig ball of energy who fearlessly toes the tightrope that separates comedic acting from slapstick.

The duets, trios and other assorted multivoice parts in Così are some of the most complicated and gorgeous Mozart ever wrote. Never has his compositional dexterity been on more awe-inspiring display, as he moves seamlessly from passages sung in harmony to interdependent, contrapuntal melodies, sometimes within the same song. From material to cast to crew to orchestra, this Così fan tutte is a veritable tour de force.