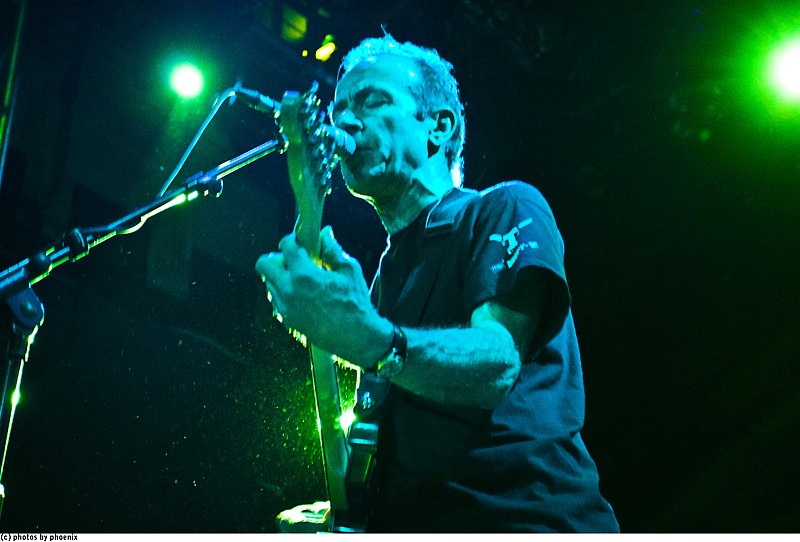 Hugh Cornwell is not a monster. Yes, his sneering vocals, PC-baiting lyrics and paranoid obsessions made the Stranglers one of the most notorious, obnoxious bands of the original New Wave. (On the strength of songs such as "Golden Brown," "Peaches" and "No More Heroes," by the early '80s, it was also one of the most commercially successful acts.) But for Cornwell these days, heroin, groupies and flying saucers take a backseat to the wonder of hydroelectric engineering that gives his new album, Hooverdam, its title.

Don't consign him to the Old Eccentrics' Home just yet, though. Produced by Liam Watson (who engineered and mixed the White Stripes' Elephant), Hooverdam's stripped-down, three-chord sound is rawer than anything Cornwell's done since well before he left the Stranglers in 1990. He's giving the whole thing away for free on his official site, a pretty punk move for a sexagenarian. And this veteran of British arenas and European festivals is on a club tour that takes him to places like Off Broadway, where he'll be playing Friday night.

B-Sides: Why the title Hooverdam?

Hugh Cornwell: I wanted a title that would be strong, and sound good to say, hoping I suppose that the more catchy the title was, the better the album would be. But I've always loved Hoover Dam. I've watched programs about its construction, and it's one of the landmark achievements of humankind. It's inspiring; it makes you aspire to things bigger than yourself. It's a monument that will last the test of time — maybe subconsciously like I wanted the album to be.

Even early on, the Stranglers were always very tight, and your songs had a sort of pop sheen. The new record is much looser, much more ragged. Was that a conscious direction you wanted to move in?

That's sort of the way it happened. It's worth remembering we're only a three-piece, so there are more opportunities to be, as you say, ragged. And the Stranglers had keyboards and we don't. Keyboards are like pouring a pot of glue over the music and filling all the spaces.

A lot of people were surprised when you left the band in 1990 — the Stranglers had had the same lineup for fifteen years at that point. Why did you leave?

How has that gone?

Well, it's been a hard fucking flight. A lot of hard work. But I'm finally getting somewhere now. The last few years have gone well.

As an American, one thing I have to ask about the new album is, what's so bad about Trowbridge [in reference to the opening cut, "Please Don't Put Me On A Slow Boat To Trowbridge"]?

Well, I've got a place out in the country near this town, Trowbridge. They've got this very confusing one-way system there. I've been there 200 times, it's not that big a town, and I seem to get lost there every time. There are certain areas I won't even attempt to go into anymore. It's like the Trowbridge triangle. A friend of a friend knows the mayor personally, who came out in the press when the song came out and said he was upset, but secretly I've heard he's been very pleased. With the publicity, he was able to push through some measures to improve it. I haven't been back since.

We're playing Stranglers hits mixed up with the Hooverdam tracks. So we'll do, like, "Get A Grip (On Yourself)," then a new one like "Going to the City," then "No More Heroes," then another new one. Backwards and forwards, right? You'll hear the latest stuff sitting side-by-side with old Stranglers classics.

Speaking of Stranglers classics, do you still wear the legendary "Fuck" T-shirt?

I haven't even got it any more. I think I have a remake, but I don't know what happened to the original one. It's probably worth a fortune now.