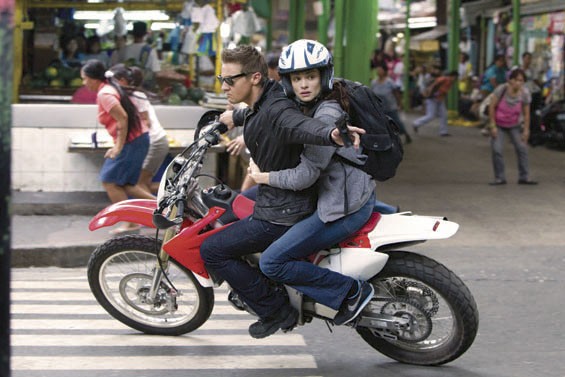 The Bourne films have more than just overstayed their welcome and outlasted the Ludlum books — they've been Van Halenized, with an abrupt change of frontman and a resulting dip in personality. Now, we have Jeremy Renner as another Treadstone mega man (there were nine, apparently), and though he is a likable enough pug-nosed action figure, the Damonlessness is sorely felt.

Renner is not stranded by himself — The Bourne Legacy is chockablock with busy character-actor casting, from Edward Norton's nasally fed bulldog to fleeting cameos by David Strathairn, Scott Glenn, Albert Finney and Joan Allen. The film is as densely packed with officious people and global villages as Syriana and takes itself about as seriously. Mostly, though, Renner has on-the-run scientist helpmate Rachel Weisz, who is 41 going on 23 and brings a badly needed, full-throated payload of personal energy to her tagalong scenes, even though they're just that.

Given the film's relentless slam-blam affect, it's rather amazing that anybody gets to act at all. But acting does happen, mostly in a two-sentence splats, just enough to kick the narrative one more foot down the highway on its way to the inevitable showdown. There's a lot of pensive screen-watching in dark surveillance rooms.

Tony Gilroy, on his fourth Bourne and now unleashed from Ludlum's paperbacks (the subsequent Eric Van Lustbader sequels, even the one titled The Bourne Legacy, were not consulted), overplots in the Christopher Nolan manner. But Gilroy was smart enough to make room for juicy dramatics: After the film's lengthy centerpiece begins with a hairy workplace-shooting ordeal that Weisz survives, she heads to her crumbling fixer-upper mansion in the woods, where she's visited by seemingly concerned feds. Antics ensue, but only after a hearty dose of old-school interpersonal tension. The story in general takes a while to hit gears, but its primary task is revealing the broader program from which Bourne arose and the pharmaceutical basis of its behavioral modifications. Renner's Aaron Cross, first met fighting off wolves in Alaska, is a pill-popping über-mensch who suddenly realizes, as per Norton's bureaucratic fiat, that the program is being shut down and its progeny eliminated one by one. He's motivated to survive the onslaught (at first, via drone) but also to score more über-dope; Weisz's lab geek agrees to help only after realizing she's being hunted, too.

This presents a dynamic Damon might not have enjoyed: Without his meds, the quick-minded Cross would revert back to his old learning-disabled self, like the experimental subject in Flowers for Algernon. ("I've got a long way to fall," Cross says, grumbling.) You can't blame the lug, though the notion that only a daily dose of "viral" beanies was all Damon's Bourne needed to be Bourne is disenchanting, to say the least. The exposition supporting this chemical back-story fills the eddies in the action flow in ways the Bourne movies never required before, and the techno-gibberish flies like confetti.

Bourne, we're told, is also still evading assassination somewhere, and perhaps Universal is hoping for a Damon/Greengrass reunion for No. 5, which we'll call The Bourne Redundancy for now. Renner might just be a placeholder. Working in the trenches so he can eventually make himself another Michael Clayton, Gilroy keeps things brisk and relatively smart, but he can't be surprised if we find the rooftop-'n'-motorcycle chase through Manila a little rote by now, however white-knuckly and free of Greengrass camera palsy. The late-in-the-game introduction of a supervillain — a Bourne 2.0 from a "beta program" flown in from Bangkok in white skinny jeans — feels like outright pandering. But hell, it's the fourth film, and that's what happens when Hollywood hyperextends a simple paradigm beyond even the patience of the last cast and crew. (Greengrass just "wasn't interested" in another Bourne, and without him, Damon bailed.) Are we expecting much more?