Eclectic Ensembles: Embrace the strange and the scandalous 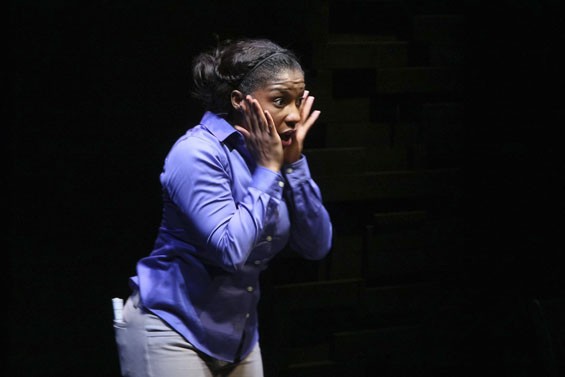 Stewart Goldstein
No Child... returns to the Black Rep with two series of performances.

Are you looking for some unusual theater fare this fall? You don't have to look far. Start next week with (going to see) Going to See the Elephant. Set in the front yard of a sod house on the empty Kansas prairie in 1870, this mood piece captures a moment in time during the American migration west. Nationally, this show is not all that well known. But here in St. Louis, the title is larded with nostalgia. Seven years ago Going to See the Elephant was the attention-grabbing debut offering from the newly formed Orange Girls troupe.

I vividly remember seeing the play on its first weekend at the St. Louis Jewish Community Center (JCC). Director Deanna Jent sat in the front row and unconsciously mouthed much of the dialogue as it was being spoken by the actresses onstage. Her love for the project was palpable. Now that tiny JCC theater is gone; three years ago the Orange Girls disbanded. But Jent is directing a new production at Mustard Seed Theatre. Once again, Elephant's acting troupe will be anchored by Nancy Lewis as Maw, a kind-of tall-grass oracle.

One week later, beginning on Friday, September 7, R-S Theatrics will stage the acclaimed avant-garde musical Adding Machine, an adaptation of Elmer Rice's 1923 expressionist classic about the plight of the anonymous Mr. Zero, who finds life difficult in an increasingly industrialized society. First directed in Chicago in 2007 by the ever-inventive David Cromer, the musical promptly moved to off-Broadway, where it won a pile of awards. Adding Machine arrives in town with a high pedigree.

Although normally the Black Rep season begins in January, this year it's including some preseason fun, starting with the 10-day return of No Child..., Nilaja Sun's one-woman play about a neophyte teacher's attempt to stage an ambitious theater production in an anarchic Bronx high school. Patrese D. McClain's multiple portrayals of the teachers, students and high school administrators deliver entertainment of the highest order. If you missed this love of a show last March at the Grandel Theatre, you have the opportunity to stop kicking yourself for that inexcusable lapse in judgment (or to go see it again, because surely there's too much to absorb in a single viewing) beginning Friday, September 14 to Sunday, September 16 at Mary Institute and Saint Louis Country Day School and continuing Friday, September 21, at the Edison Theatre.

Like No Child..., Lillian Hellman's The Children's Hour concerns dedicated teachers. Here, the lives of two idealistic young women who are running a private girls' school are destroyed after one of their students spreads the lie that they are lovers. This was torrid material when the play debuted on Broadway in 1934. The Children's Hour became a scandalous hit and was filmed by William Wyler (in 1936) as These Three. Hollywood censors insisted that the lie be switched from lesbianism to the more conventional sin of adultery. Wyler was never happy with that compromise. Twenty-five years later he remade his own movie, this time under the play's original title, but many critics preferred the first version. Although last year The Children's Hour enjoyed a sellout revival in London with Keira Knightley and Mad Men's Elisabeth Moss, in recent decades Hellman's scripts seem to be yesterday's news. Beginning Wednesday, September 26, the two-week run at the Webster Conservatory of Theatre will allow viewers a rare opportunity to reassess this vintage drama.

You also can revisit (or perhaps formulate, if you've not heretofore thought about them) your feelings for Andrew Jackson, America's seventh president. In terms of a dominant presidency, Old Hickory is the sole link between Thomas Jefferson, who left office in 1809, and Abraham Lincoln, who entered the White House in 1861. Despite his popularity, Jackson was — and remains today — an enigma. We don't even know (nor apparently did he) precisely where he was born (though we're pretty sure it wasn't Hawaii). Perhaps the "rock star" approach he receives in Bloody Bloody Andrew Jackson will bypass the man and deal with the more accessible legend. New Line Theatre presents this rock musical's St. Louis premiere starting Thursday, September 27.

Just as Bloody Bloody Andrew Jackson seeks to point out parallels between America in the pre-Civil War 1830s and America today (it was, after all, Jackson who urged voters to be wary of "the rich and powerful [who] too often bend the acts of government to their own selfish purposes"), so too does the rock musical Spring Awakening find connectives between the frustrated longings of teenagers in a repressed 1891 Germany and 21st-century America. Who ever knew that nineteenth-century Germany was such a randy place? But teenage fears and yearnings are brought to confused and sometimes achingly poignant life through this vibrant and often eloquent rock score. The show opens at Stray Dog Theatre on Thursday, October 4.

The next night, Friday, October 5, our intrepid journey through the unusual comes full circle with Saint Louis University's staging of David Lindsay-Abaire's cockeyed comedy, Wonder of the World (which, in a sad irony, was the Orange Girls' swan-song production in 2009). Lindsay-Abaire's daffy script strives for the same exhilarating thrill you experience when you don a raincoat and ride the Maid of the Mist up to the swirling base of Niagara Falls. Unusual? You bet. But then, the entire fall season promises to be swinging far afield of the tried and true. All you have to do is dive in. 